Review: QUEEN OF EARTH, Another Promising Effort By A Fearless Director 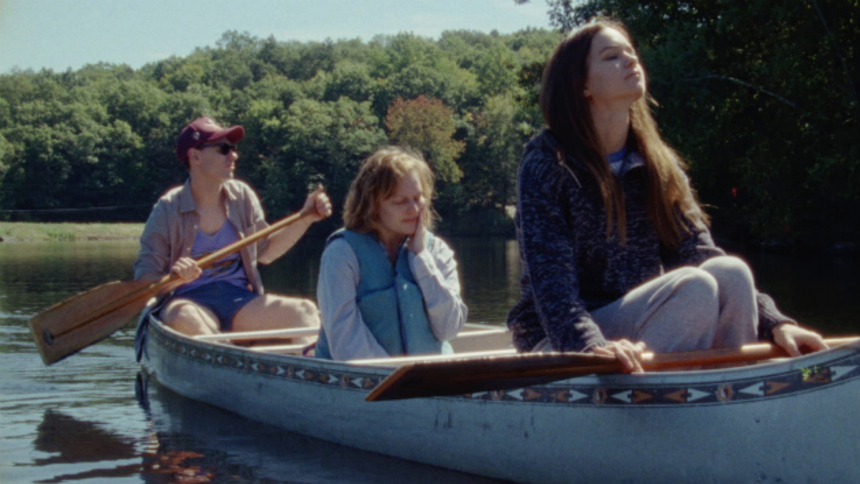 Alex Ross Perry is a more than promising young director. He courageously combines intimacy, humor and a sense for cinematic language and form. Nevertheless, his latest, Queen of Earth, is a step back for the young director in terms of maturity and individuality, especially compared to his impressive Listen Up Philip.

In Queen of Earth, the director aims at the same time for greatness and modesty. The modesty comes from working with fewer people, fewer locations, and a smaller budget than in his previous film while the greatness follows in the footsteps of directors like Ingmar Bergman and Roman Polanski. To be frank, one can easily speak of a rather cheap copy/combination of Persona and Repulsion. But there is something in the faces of his characters that saves the crucial spark of originality.

Queen of Earth is about Catherine and Virginia, two best friends who find refuge in a beautiful and lonely cabin at a lake. Both of them have and have had problems in their love lives and social lives, and between each other. A suspenseful tension between past and present creeps through the images until it becomes harder and harder to distinguish reality and imagination. It is a horror film about love and a chamber drama with the kind of sarcastic dialogue that makes one feel ashamed to be alive.

The road to madness of Catherine, with point-of-view shots and a very compelling score by Keegan DeWitt, strongly reminds of Polanski's Repulsion, where the leading part is played by a certain Catherine (Deneuve). It is like a game for connoisseurs as Perry has some shots in his film that pay tribute to his models. In Polanski's film it is a rabbit that gets never eaten and rots in front of our eyes, whereas in Queen of Earth it is a salad.

Elisabeth Moss and Katherine Waterstone give stunning performances on the verge of depression and loneliness. There is a great hurting ambivalence in their friendship. They destroy and help each other at the same time. Persona is not only quoted in the relationship of the two women, the setting, and the style of the monologues, but also again in some shots, such as one where Catherine paints Virginia. (Another telling name...)

The 16mm-bliss Perry again delivers makes every tear on the pulsating faces feel like a marble of the skin. Queen of Earth is a film about facial expression and closeness. One can watch those faces for many minutes but still the mysteries of humanity, weakness and love remain hidden somewhere behind these eyes and twitching lips. The intimate look at the textures of faces gives, of course, much room for performance, but all actors succeed in keeping the right balance between expression and restriction.

One could write a whole text about the male characters in the film, the boyfriends present and past. They seem to be pale at first sight but if one takes a closer one can sense that they work at the same time as our way of perceiving the women while merely existing through the perception of these women. They come and go suddenly without really being introduced or asked for.

In many ways the film feels like a formal exercise for its director. But maybe that would be an unfair thing to say because one can clearly see that Perry is searching for a truth that hurts. While watching Queen of Earth one loses any sense of time. It is the fascination of the lustrous water, the dissolves of shadows and faces, and the sense of entrapment that would have been enough.

When the film starts to quote Bergman and Polanski as a method, it gets on a dangerous path of over-ambition. Perry being a cinephile, such a way of working might seem only natural and even personal for the director. And he absolutely succeeds in terms of craft and mood. It is one of those films where one could argue about the importance of originality. But no matter what the result of such a discussion might be, Queen of Earth is another promising effort by a fearless director.
Review originally published during Berlinale 2015. The movie opens today in select theaters in the U.S. via IFC Films. It's also available to watch via various Video On Demand platforms.
Sign-In to Vote
Tweet Post Submit

Do you feel this content is inappropriate or infringes upon your rights? Click here to report it, or see our DMCA policy.
Alex Ross PerryElizabeth MossKatherine Waterstone