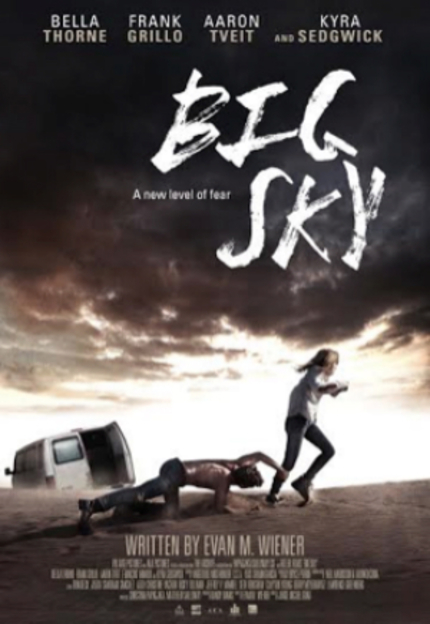 Like many sophomore features, Jorge Michel Grau's Big Sky suffers a bit by comparison with what came before.

That's especially so because Grau debuted with the immensely impressive Somos lo que hay (We Are What We Are), an atmospheric character drama about a Mexican family of cannibals dealing with the death of a beloved parent. In the five years since then, Grau has kept busy directing for television as well as making short films for anthologies such as The ABCs of Death and Mexico Barbaro.

Now Grau applies his skills as a director to an English-language script written by Evan M. Wiener. After a brief, foreboding tease, Big Sky introduces insolent teen Hazel (Bella Thorne) and her mother Dee (Kyra Sedgwick). Hazel suffers from a severe form of agoraphobia -- she cannot abide open spaces -- and so her mother has arranged for her to receive treatment at a facility some distance away.

In order to make the trip, the facility sends a specially-outfitted van; basically, Hazel climbs into a large box in the back of the van. At the last moment Dee decides to make the trip too, perhaps charmed by the handsome driver, or perhaps just anxious for her daughter. The van picks up more passengers before heading into desert country in the southwestern U.S. Things turn topsy-turvy when the van is attacked by masked gunmen, and Hazel must overcome her fears to get help.

From there, the story divides into three threads: Hazel, barely able to place one foot in front of another in the desert; a survivor in the van, badly-wounded and struggling to stay alive; and the masked gunmen, who are revealed to be Jesse (Frank Grillo) and his younger half-brother Pru (Aaron Tveit). The gunmen are under orders to carry out a job; they are not stereotypical, nasty gangsters, but instead men pressed into service. Jesse works hard to keep the volatile Pru under control, which is no easy task, but their kind, brotherly relationship feels refreshing in the criminal order of things.

Grau proves he is a visionary director, again working with cinematographer Santiago Sanchez to compose shots and choreograph movement in sequences that are a pleasure to watch. As with Somos lo que hay, however, the pacing is sluggish. Individual scenes have plenty of breathing space, but placing them one after another without raising the level of tension nor providing much insight into the characters gradually makes watching the movie a chore. Individually, the actors give good performances; Grillo, especially, lends a layer of exhausted control to his character that perks up his scenes. Story-wise, things eventually pick up, leading to an engaging and rather dramatic conclusion.

Big Sky is more modest and less horrific than I expected, or hoped, to see, yet its virtues stand out. It's a quiet, dramatic tale of survival, rather than a bracing thriller, and reinforces the notion that Grau is a talented filmmaker, at his best when he can make his own material.

The film opens in select theaters in New York and Los Angeles on Friday, August 14, when it will also be available to watch via various Video On Demand platforms.

Do you feel this content is inappropriate or infringes upon your rights? Click here to report it, or see our DMCA policy.
Bella ThorneFrank GrilloJorge Michel GrauKyra Sedgwick