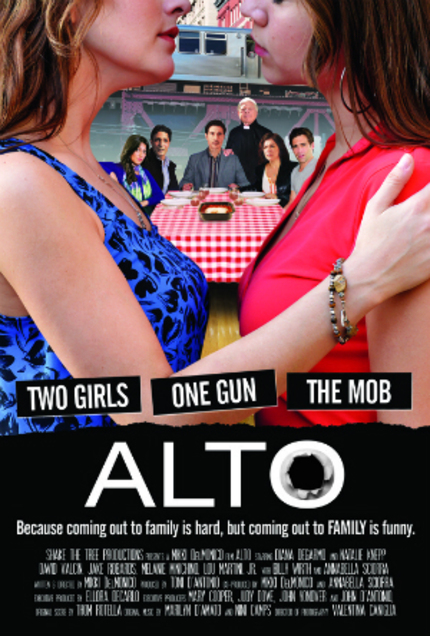 We have two clips to share with you from Alto, which describes itself as "a NYC mafia flavored lesbian rom com."  That really says it all, doesn't it?
If not, the official synopsis should do the trick:

"Frankie (Diana DeGarmo, American Idol) is as headstrong about her rock band, The Altos, as she is about her Italian-American heritage. Engaged to a good Italian man, everything in her life is in order until she discovers a corpse in the trunk of her rental car, possibly due to a mob hit. Heather, her sister, convinces Frankie to attend the funeral where they meet Nicolette (Natalie Knepp), the daughter of the new Brooklyn mafia don. When Nicolette shows up at her band's gig, it triggers a cascade of events that take Frankie towards an unexpected romance."

The cast includes Natalie Knepp (Orange Is the New Black), Annabella Sciorra (The Hand That Rocks The Cradle), and Lin Tucci (Orange Is The New Black). The film received the Audience Award at VisionFest and Best First Film at DFFLA with a Jury Prize at the North Carolina Gay & Lesbian Film festival.
First up is an exclusive clip that captures an incredibly awkward and unplanned moment when a lesbian love affair comes out in front of family members at an Italian American street festival.
Next up is a wry and very personal clip shared by director Mikki del Monico, who transitioned from female to male -- while making his first feature! He created a video to describe some of the challenges he faced.
Alto is now available on DVD and Video On Demand (VOD) from Cinema Libre Studio.
Tweet Post Submit

Do you feel this content is inappropriate or infringes upon your rights? Click here to report it, or see our DMCA policy.
Annabella SciorraDiana DegarmoMiki del MonicoNatalie KneppMikki del MonicoBilly WirthLin TucciComedyFamilyRomance