VICTORIA: The One-Take Wonder Of 2015 Gets A U.S. Trailer 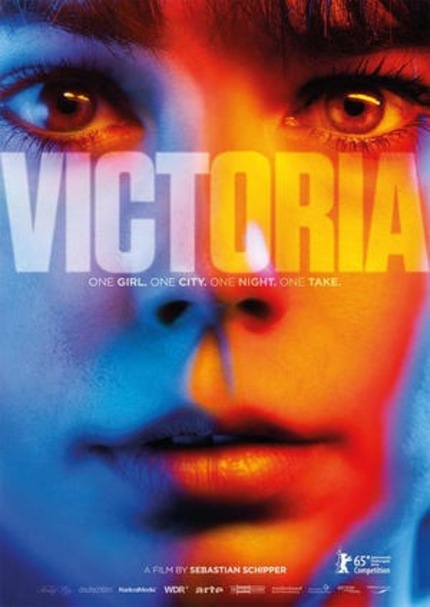 Since its premiere at Berlin in February, Sebastian Schipper's kinetic Victoria continues to make waves everywhere it goes. And now we've got a U.S. trailer ahead of its October 9th release from Adopt Films.

The big reason that the film is making such a ruckus is because it is a 140 minutes long and was shot in a single take. Let that sink in for a moment. Having seen the film, I can say that it is one of the purest, most gut-wrenching and immersive experiences I've ever had in the cinema. Ever. It's most certainly gaining ground as my favorite film of the year. And while that may seemingly be for its technical feat, it's really for creating such an authentic and rich portrait of young adulthood. Spaniard Laia Costa as our titular character does the acting equivalent of an Olympics decathlon here. The rest just wouldn't work without her commitment, which is just plain mesmerizing.

In his review from the Los Angeles Film Festival, Jeremy O. Harris was perhaps even more bold than I, citing the film as: "two parts Breathless, one part Run Lola Run... Schipper has figured out how to marry the disparate elements that make those films unique to create the best poem about lust at first sight, Millennial exceptionalism and escapism, and FOMO (fear of missing out)."

While I believe the below trailer works better than the German one from a few months back, I also feel that it is near impossible to cut a good trailer around a film that has no literal cuts in it (unless you highlight a small section of the film and plaster it with quotes). Plus, they really play up one plot element that some audiences may not want to know going in -- that is to say, you've been warned.

Do you feel this content is inappropriate or infringes upon your rights? Click here to report it, or see our DMCA policy.
berlinlaia costaone takesebastian schippersingle takevictoria