Review: SELF/LESS Wants To Be Something More, Whatever That Means 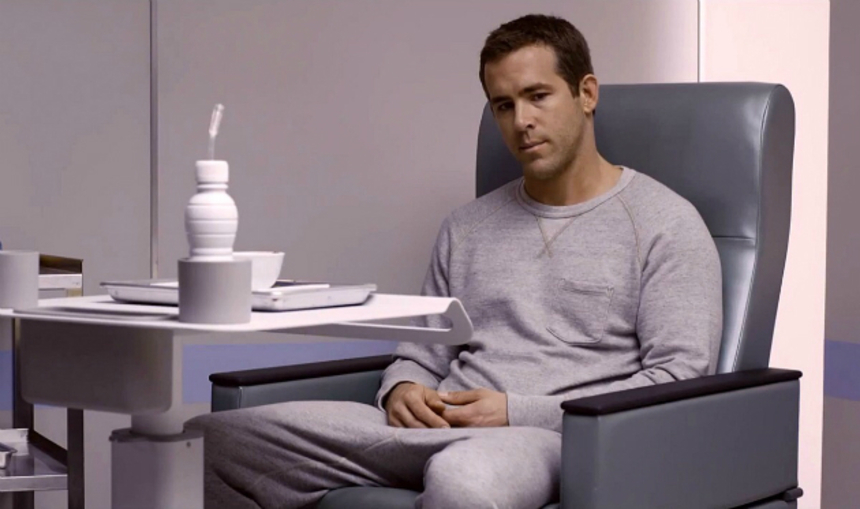 No one in sound mind and body wants to die, and that includes Ben Kingsley in the new film by Tarsem Singh.

The director made his feature debut with the visually-striking The Cell in 2000, which raised expectations for bizarre and ambitious The Fall (2006), which was also sumptuous in appearance, if narratively lacking. Since then, he has made Immortals (reviewed here) and Mirror Mirror (reviewed here), two films that continued to demonstrate his preference (and reliance) for imagery and motion over story and sense.

As far as the visuals are concerned, Self/Less represents the director's most reality-bound effort yet, following along as the very wealthy New York real-estate developer Damian (Kingsley affecting a New Yawk accent) comes to a decision about his future. Damian has been given just six months to live, which leads to him moping around his glittering Manhattan high-rise residence -- outfitted in gold, natch -- and contemplating the human wreckage of his life. He failed at marriage, and is estranged from his daughter Claire (Michelle Dockery from Downton Abbey); his only friend is his longtime business associate Martin (Victor Garber).

Awash in regrets, he is open to an anonymous suggestion that he check out a new service offered by a secretive organization. Albright (Matthew Goode), the company's representative, explains that they are looking for 'a few good minds that would appreciate more time to live up to their potential,' or some such corporate hogwash, and before Damian can cough six more times, he has given himself over to a new life with a new body and a new identity. Damian (now played by Ryan Reynolds), recuperates from the operation and is then relocated to New Orleans, where he quickly begins to enjoy the physical and sexual benefits of living in a much younger, good looking body that he's been told was generated in a laboratory. The only thing he has to do to continue enjoying his new sassy self is take a pill every day. Because the story requires it, one day he neglects his pill-popping and suffers the consequences; his reality begins to fracture and he catches glimpses of another life.

Is he hallucinating? Of course not! (He's pretty sure about this point, mainly because he's getting tired of all the physical activity he's been doing and the beautiful women he's been bedding.) Damian is compelled to investigate, and before you can say "boy, that was quick!" he uncovers a Major Secret about the mysterious corporation that he never really checked out very thoroughly before he turned over his life -- and $250 million! -- to it.

On the face of it -- and the heart, body, and soul of it, too -- Self/Less is pretty far-fetched and preposterous, not just the idea of transplanting one's memories into a lab-created body, but also the far more conventional twists and turns evidently conjured up by writers David Pastor and Alex Pastor. (Their credits include Carriers and Out of the Dark, which I quite liked.) What makes it work, up to a point, is that Tarsem Singh knows how to put together a motion picture. Once again collaborating with Brendan Galvin (director of photography), Tom Foden (production design), and Robert Duffy (film editor), the director crafts an elegant-looking, delicately-paced, and generally enveloping cinematic experience.

This time, however, the scenario is punched in the gut by certain narrative choices that are terribly frustrating and, dare I say, low-brow, as though someone said, "Look, this is all well and good, but we've got to rough this up a bit to make it more understandable to John Q. Public, who's not terribly bright. Let some of the characters say or do stupid things so everyone can relate, and then..." Of such decisions are maddeningly routine thrillers churned out. Ryan Reynolds, a perpetual blank slate, is a good selection as a starting point for the character, but his limitations in dramatic performances further hamper the film's effectiveness. Natalie Martinez brings energy to her role as a frenzied and often baffled mother. Ben Kingsley is respectfully grave. Matthew Goode is cool and calm, like all super-intelligent people with demented intentions.

If Self/Less had fully embraced the crazy that's inherent in its premise, the movie might have delivered far more satisfying and distinctive thrills. As it is, however, Help/Less might have been a more fitting title.

The film opens in theaters throughout North America on Friday, July 10.