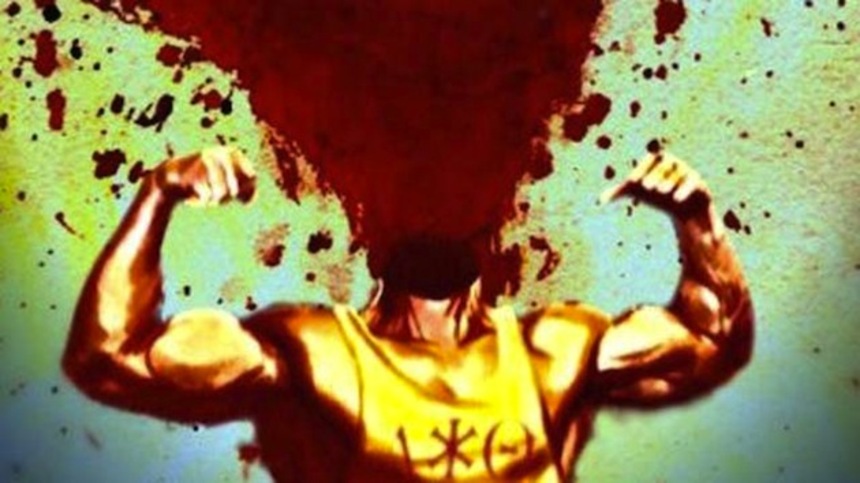 Dude Bro Party Massacre 3 is the kind of instantly classic camp comedy that teenage comedy nerds across America pray to late at night. At once it is both irreverent and transgressive in its examination of what it means to be both a dude and a bro.
My relationship to comedy of the this type is tenuous at best. Growing up, I was the only boy in a house of girls, so "bro humor" always felt alienating. Yet, in Dude Bro Party Massacre 3 the "bro humor" is different at it's core: it's fraternal. Moreover, the narrative of the film proves to be refreshingly feminist once the surface is pulled back, making this one of the most exciting new "bro comedies" of the year.

I recently sat down with John Salmon, Michael Rousselet, Michael E Peter, and Alec Owen of 5SecondFilms at a very DUDEBRO cafe in the middle of Los Angeles' Franklin Village. We chatted about the importance of The Room and its relationship to their origin story, and how Vine jump-started the production of this movie. Speaking with the guys it became very clear how a film with 10 credited writers spoke so clearly as one voice, because these guys have the energy of the internet and the unity of a Greek Chorus.

TWITCH: So let's jump right in...this movie made me think of so many things but just stylistically, what made you guys decide to tell the story THIS WAY? The idea of it being this late night public broadcast film that's been recorded over someone's first steps. Who's demented idea was that?

Michael Rousselet: I don't even know exactly how that happened, but we wanted it to be a vhs-looking film. The idea of recording over commercials, like back in the day, brought up the idea that we could put commercials in it. Kinda like 5secondfilms which is our style. So starting and stopping and trying to edit out commercials was, I guess, an organic excuse to get five second films in the film.

John Salmon: It's a weirdly nostalgic thing, and I feel like a lot of people around our age remember watching tapes that their parents recorded or you recorded that had like nudity scenes that were all scratched up or commercial breaks that were half interrupted. And it has this really funny sort of editing effect and I think we just nostalgically wanted to recreate that.

Michael E Peter: One of the things we always thought about going from five seconds to feature was that we had to keep up our pacing and those quick little commercial breaks was our way of saying, "Oh we can put in a 5secondfilm and we can have a really fast, jarring joke just to keep things at our very "frenetic" pace.

MR: Also the idea of recording over a childhood video was really important to us, that you would give up this memory of your family for this shitty movie.

Exactly! Haha. Something we talked about when you guys walked in was the "machismo" in this film. For me, watching this as a queer dude, I thought to myself, that I felt like I was watching true "machismo camp" which is amazing because camp is academically very aligned with queerness. And I felt like in your embrace of those tropes you ended up making this really radical feminist feature. Was that conscious?

JS: The idea of genderpflipping, where instead of the women being objectified we objectified the men, so yeah, that was something we addressed and wanted be aware of. And we didn't want to be like gay panick-y or--

MP: We talked about that a lot actually because we'd say "Is this a really funny joke because of gender roles we are flipping? Or is it funny because we are like 'haha it's sexual!" Like are these jokes smart?
MR: I also know that when I think of "machismo",  you see a guy who's presenting a lot of "machismo", like all you see is "guy" *he makes growling noise* all I see is insecurity. Like I see someone who is desperately trying to prove something and going way to far with it, and I think that's definitely something we tried to deal with in these characters. Like Turbo! You realize he is unhappy with so much about himself and is desperately trying to prove his worth to these guys by being super tough and insisting on these wrestling contests, you know?

I love that. Something that annoys me, personally, is the idea that one needn't be socially conscious in comedy. So I loved that you had people of color in your film and the concept of gender flipping. That being said, how did consciousness arise out of this writing process? You guys wrote it as huge group.

Wow. So were you guys each taking passes on the script? Like how does this work? Was it like a writer's room?

MR: Well it started out as an outline. A strong outline idea, and we divided them up and we each took a part and then write that section. I don't really remember who did.

Alec Owen: That was how we did the first draft!

MP: And nobody knew what the other had written before..

AO: We wanted it to be as stupid as possible. At first.

JS: And we didn't see the whole thing until we sat down to read it as a group. Which was the funniest thing I've ever seen in my life. WE  HAD THREE SCENES IN A ROW WHERE THE SAME CHARACTERS ARRIVED BACK AT THE LAKE HOUSE. Like, they arrived there and had an argument and then they'd just arrive again and have an argument.

MR: At the end of the day we were all like, "This is the funniest thing we've ever read, now we have to rewrite it". It was more of an experiment in our own humor.

MP: At some point we decided to turn it into a real movie.

MR: So then we assigned Alec to be the head writer to sort of give it a singular voice. Because as it was there as problem with tone and it would become very nebulous.  So we couldn't figure out the sense of humor of it.

AO: Yeah. I wrote a lot of pages but I ended up becoming a sort of curator.


And what was that tone exactly? Do you know what you sort of innately knew about the script?

AO: Yes! Yes I do actually. After I had been working on the movie for a while, the thing that I really drew on...and this was in the original outline too...were the pranks that the dudebros did. And the fact that everyone loves them, even though they are doing these horrible pranks. So I sort of realized, "Oh my god, these are actually the worst people in the world. This is a movie about how rich, privileged white young American men are ruining the world." So that was the thesis for me.

MR: That broke the code!

AO: And that to me was what it was totally about. LIke how can we make so many movies that glorifies these assholes? It becomes more aware of itself as it goes along and you realize that Motherface is actually right. So it kinda becomes a sort of feminist film....A review did call us a feminist film! Which is amazing because WE DO NOT pass the Bechdel Test on purpose!


So how did you guys all meet? How did this group come to be?

MR: At USC...I think all of us at this table went to USC. I met Brian Firenzi in a screenwriting class and the teacher said, "What did you do over the summer?" and Brian said "Oh I made some five second films with my friends" and I didn't know Brian and I thought: "That's the weirdest dumbest thing I've ever heard!" Then I saw some of them and I was like, "I will Never, ever leave you alone." And we became fast friends over our love of crappy movies and I met Alec because he' s a The Room fan...I mean look at him (he is indeed wearing a first anniversary THE ROOM shirt)

Which is now on Netflix.

AO: You know  one thing I want to mention is that our cast and crew screening of Dude Bro Party Massacre 3 was on the same night and literally the SAME TIME as the 12th anniversary of THE ROOM screening. That meant a lot to me.

MR: But yeah...back at USC I met Brian, Alec and Peter. Then back in 2008 when we all graduated Brian said, "Yeah I want to do five second films every monday through friday" and we all said "Yeah. Of course" And it took INSANE discipline to do this. But it's been what? 1500 films in 6 years?

That's insane. How did you guys feel about Vine when that happened?

MP: Vine, for us, was like...we embraced it. Although I do love that they did 6 seconds instead of 5. But the moment it was announced we were definitely like, "Alright...what are we doing next? Because this is going to be huger"

MR: Well we did decide to do the feature film BEFORE Vine but when Vine came out we were like, "Well, this works out perfect."

MP: But it definitely put a reality check on fivesecondfilms.

Well your group work ethic is amazing and inspiring. Do you have any tips for how to maintain a successful long term creative relationship? What has it been like for you guys?

MP: I don't think it would have worked for this long if we weren't all friends first. I mean, we are all essentially family. If someone is going through something we are always like, right there. And we are always making each other laugh. I think the fact that it wasn't ever a manger versus employee type relationship it helped. And it did get tough when we had to become more of a production unit, with a hierarchy and everything. But still, I think, through and through it's still felt like this is our LA family.

MR: I feel like we have all worked together long enough and been friends long enough that when times came when we did disagree, and they did come frequently, we always sat down and just like heard each other out.  Not wait for the other person to speak so we could start but really hear the other person out.
AO: And while there may have been nights when drinks were involved and some genuine "Fuck You's" were thrown at friends, I do feel like that kind of made everyone closer. I can't believe that now we have a movie that we all love so much but we do.
JS: Like with 5SecondFilms there were little arguments here and there but
AO: At the end of the day it's like- "It's five seconds, I don't fucking care put it up.

JS: But at the end of the day we are like a family and you argue and you fight but then you have this baby that we all get to raise now.

Well thank you guys so much, you guys are amazing.

After a stellar showing at Comic-Con, you can now check out Dude Bro Party Massacre 3 on the film's official site, iTunes and various VOD platforms.
Tweet Post Submit