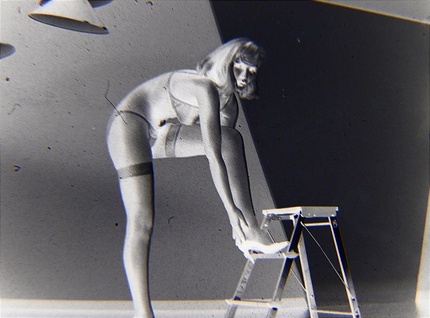 For two weeks Doc Alliance,an European online streaming platform for documentaries has been presenting many digital copies of Austrian avant-garde filmmaker Peter Tscherkassky's films for free. Tscherkassky, whose latest The Exquisite Corpus premiered a few days ago in Cannes, is simply put one of the most important avant-garde filmmakers worldwide.

He is devoted to the materiality of film and to the re-cycling and re-copying of found footage. His films have a huge theoretical as well as technical dimension but they are also heavily sensual with a trembling flair of revolution that makes it hard to think while watching. Of course, it is not the best way to see his films on a digital screening platform online, but to get a first idea and to be able to re-watch this opportunity is simply marvelous.

What you can discover with Tscherkassky is a furious search for a new language in film. It is an immersive endeavor somewhere close to the writings of Jean Epstein or Stan Brakhage, but also deeply rooted in the Austrian avant-garde tradition where the fight for film as material continues. But honestly, Tscherkassky plays in a league of his own. He is the genuine filmmaker of an innocent second regard who at the same time reflects the violence, desire and penetration of film and of humans.

In cinema people are talking about the first regard, the aim to film something as if it was seen for the first time, the way images are born. But with Tscherkassky it is more like a rebirth, a second regard which is as a matter of fact innocent, too. It is a first regard at something we have already seen. His film Motion Picture from 1984 offers a different and manipulated look at Lumière-Brothers famous "first" film Employees Leaving the Lumière Factory and therefore, quite naturally, he proposes a new beginning or a new look at the beginning.

And make no mistake, the rebirth of film is painful. It is as if someone would scream: Cinema is Dead (again) and Tscherkassky would answer him with the sensual repetition and transformation of images that are always memories and presence at the same time and which scream: Cinema is Undead (forever).It seems no coincidence that one can often discover open eyes in the dark with Tscherkassky.

As soon as we are able to look again what will we see? First there is a constant fear with Tscherkassky, a fear that the Act of Seeing destroys. His amazing Outer Space, a found footage frame by frame re-cycling of the horror film The Entity with Barbara Hershey shows that the material and rhythm of film can be a shadow that makes it hard to look, that is a threat to the protagonists, but also to the viewer.

Hershey is becoming a ghost, an optical printed phantom pulsating in the corridors of a genre and trembling due to the violence of filmmaking. Splintering surfaces and the menace of a woman alone lost in the material of film. Tscherkassky makes visible how violent filmmaking can be, but also how sexual and lost.

I recall a quote of Jean-Michel Frodon about Robert Bresson: "It is not because Robert Bresson is a voyeur - it is because he is a film director. His eye is not passive but active, and this action itself has a sexual dimension" The sexual dimension with Tscherkassky is always related to the world of dreams and to the question of women being objects and subjects of seduction.

Dream Work might be an exemplary film about these sensations, one where a constant flux between sensual feeling, nightmarish fears and the act of being looked at are intermingled in a dreamlike violence of enjoyment or vice versa. Our dream might be the invasion of fictional worlds and Tscherkassky lives it. Naturally, one follows sexual impulses.

In L'Arrivée the kiss brings together people and cinematic images, but there is still a destructive longing as the beauty of Catherine Deneuve also marks the end point of Tscherkassky's film. While finding its essence the filmmaker also reveals the limits of filmmaking. What can you see in the desire of cinema?

There is something I was not clear enough about: The Act of Seeing is not with one's own eyes, it is about the Act of Seeing with the eyes of cinema. The mesmerizing Instructions for a Light and Sound Machine (the making-of this film is also discussed in a masterclass part of the program at Doc Alliance) uses images of Sergio Leone's canonical classic The Good, the Bad and the Ugly to show how violent looking at something with cinema's eyes can be. Jay-Z's line: "I shoot at you actors like movie directors" gets visualized by the filmmaker.

One almost has the feeling that Tscherkassky's protagonists can see us and feel the film they are in. They are mechanical ghosts on the run, the hate and love to be projected and they got lost somewhere in the material. The same is true for the viewer but as soon as you cannot find your way, you are reminded: Ah, we are in a cinema.

Tscherkassky presents the illusion of a broken illusion. One can feel the sensual gaze of repetition while watching his Ballett 16, a structural super-8 re-photography of a dance. The illusion and beauty, are also related to the trancelike qualities of Tscherkassky's cinema. His images are vibrating like the one's of Philippe Grandrieux, every second is a sensation (be it sensual as in Erotique or with the fainted birth of a lost memory like in Parallel Space: Inter-View).

Quite logical Tscherkassky is also interested in the rhythm (and projection) of film. His Get Ready which was produced as a trailer for Viennale is an examination of the power of acceleration. The same is true for his Dream Work and for Manufracture, a film about movements.

Though there is a dark tendency in all his work, there is also a surprising amount of humor and irony. His undoubted masterpiece Shot-Countershot is nothing more than one of the most intelligent jokes you might have ever seen and that one can only understand and capture in cinema. But also his most Austrian film (whatever that means) Happy-End, a home video rework has a strange irony to it.

In questioning and celebrating the Act of Seeing Tscherkassky is a highly contemporary artist, one that needs to be seen, whose work needs to be spread. Thus the way of an undead cinema can be followed by new generations with a hunger for images which can always be looked at for the first time again.

The retrospective continues until June 7 on dafilms.com