Review: POLTERGEIST, A Remake That Resembles The Original A Little Too Closely 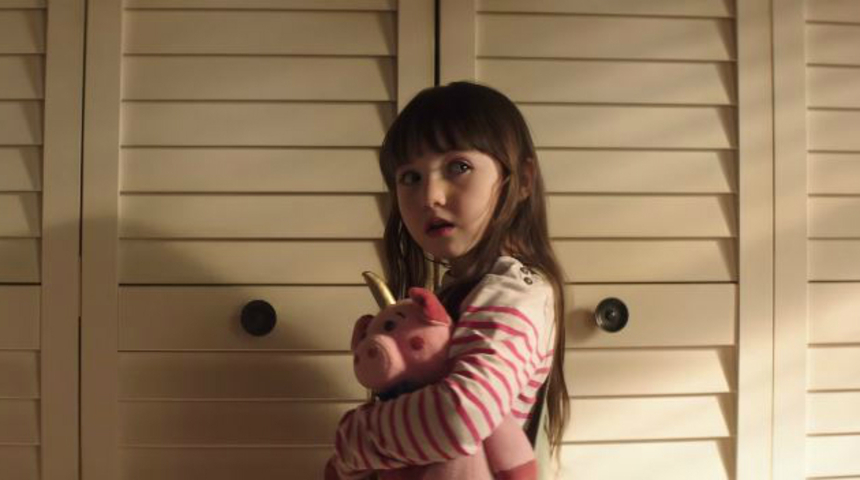 "They're here!" The original Poltergeist looms large in modern popular culture, the 1982 film having grown in stature over the years to the point where it's considered a classic of the haunted house genre.

Indeed, the original is a very good thriller that pushed the ratings boundary of the time and added a welcome layer to the reputation of Steven Spielberg, credited as a writer and producer (though long rumored to have lent a heavy hand to director Tobe Hooper). Released in the same year as E.T. The Extra Terrestrial, the film presented the flip side of suburban life, focusing on the paranormal terrors that plague a family in California.

The remake moves the action to an anonymous suburban development in Illinois, where the Bowen family has been forced to relocate after Eric (Sam Rockwell) loses his job. The house is evidently smaller and more rundown that their former residence, though it's still a two-story house in a lovely development that is strangely empty of other residents. (A throwaway line about a high number of foreclosures in the neighborhood may be meant as explanation.)

The wisecracking Eric works to keep up the spirits of his family. Wife Amy (Rosemarie DeWitt), teen daughter Kendra (Saxon Sharbino), younger brother Griffin (Kyle Catlett), and 6-year-old Madison, aka Maddy (Kennedi Clements) are not terribly happy about moving, either, but attention is quickly drawn to Maddy's conversation with something in her closet. Griffin is initially intrigued by the oddities that Maddy discovers in the house, but while the boy soon begins to back away from such encounters in fright, the girl is drawn closer and closer to paranormal danger. I've seen the original movie a couple of times over the years, and the remake appears to follow the basic narrative thrusts and parries with relative faithfulness; some shots even appear to recreate the original framing. The change in the financial circumstances of the Bowen family is a nod to the modern day economic situation for many families in the U.S., though it frankly feels like lip service for the unemployed Eric to insist, for example, that his wife not seek work.

That's nit-picking, though, and avoiding the central issue at hand for a remake of such a well-known original. Does the new movie surpass the original? No. The mean-spirited, nasty disposition of the 1982 film made it an unforgettable descent into terror that has inhabited many a personal nightmare since.

But does the 2015 Poltergeist stand on its own two feet? Yes. It exceeded my expectations, which admittedly were pretty low. Thanks to Rockwell's ability to toss off jokes in an off-handed manner, and the movie's recognition that comic relief can be a good thing in a horror movie, the remake establishes its own identify as a jaunty haunted house thriller.

The remake moves at a quick pace, clocking in at a little more than 90 minutes, which minimizes lag time. It also features Jared Harris in, essentially, the role made famous by Zelda Rubinstein in the original, a veteran paranormal investigator called in to help out. I like Jared Harris as an actor, but the substitution also reinforces the perception that the remake is totally unnecessary, no matter how thoughtful the changes and revisions.

Indeed, some of the changes in the script by veteran David Lindsay-Abaire (the devastating Rabbit Hole, but also Robots and Oz the Great and Powerful) feel arbitrary, or even obligatory, as in, "Well, some things should be different, just because..." As often as the film feels like it will break free from the expected twists, it scurries back to the tried and true. Director Gil Kenan, who previously won acclaim for his animated fright flick Monster House (and also directed the live-action fantasy City of Ember) keeps pushing the level of tension as often as he keeps the camera moving, which is to say, often, which definitely helps.

The same narrative beats still work, but it feels like a very safe route to take. In a similar fashion, the avalanche of CG effects definitely look cool and impressive, yet they do little to advance or strengthen the story. The economic forces behind remakes are easy to understand, yet beyond a desire to make money by copying a formula that worked 33 years ago, the 2015 version of Poltergeist doesn't have much reason to exist. But it's here.

The film opens wide in theaters across North America on Friday, May 22. I watched it in 3D, which appeared to be well-utilized without becoming too gimmicky.

Do you feel this content is inappropriate or infringes upon your rights? Click here to report it, or see our DMCA policy.
Gil KenanhorrorPoltergeistremakeRosemarie DeWittSam Rockwell