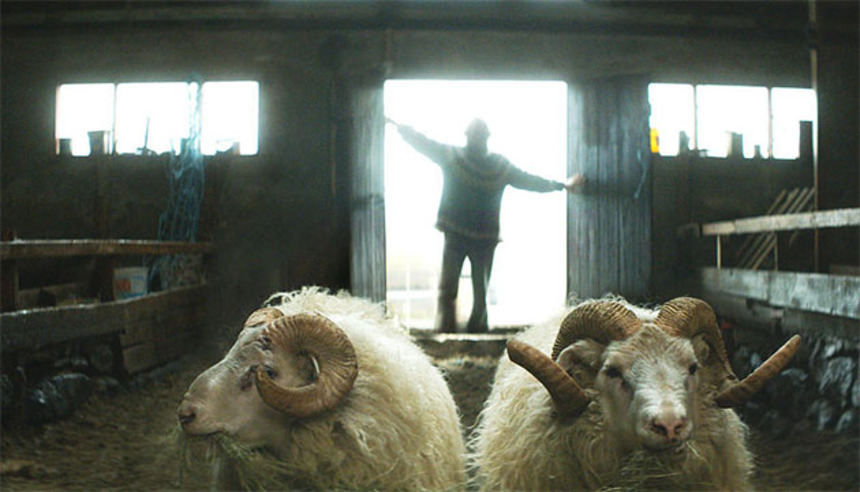 Oh, Iceland. With your otherworldly landscapes and ability to extract cool, dry drama like you're farming permafrost, your cinema is like your vistas -  inspiring and intimidating. Add to that some of the special spice that has made the last several decades of Danish cinema some of the world's best and you have some pretty magical ingredients for a film that's truly special.

Despite this pedigree, Rams (Hrútar) doesn't sound like it'd be any good at all. The story is about some farmers way out in the countryside, raising their wooly sheep and making a go of it on the hardscrabble land. Two brothers live side-by-side, and their intransigence is as tough as rock, their weathered faces showing both the strain of their work and the many years of enmity that has riven the two.

So, yes, it's a story of a bunch of animals, and some siblings, and what happens when things go very wrong for this bunch. But with these simple elements the film proves to be something truly exceptional.

Director Grímur Hákonarson navigates the story beautifully, starting out with a light, almost gentle comedy and ending up with a life-or-death drama. Along the way we grow to see the relations between the brothers Gummi (Sigurður Sigurjónsson) and Kiddi (Theodór Júlíusson) as more than simple stereotypes butting heads like the titular livestock. For a film with so many animals there's an astonishing humanity captured in these performances, with small moments that echo profoundly.

Yes, the titular animal's stubbornness is one of the more overt metaphors in the film, but throughout the storyline touches on a number of salient issues, from the disappearance of a rural life, the challenges of overcoming a health concern, and the acidic relationship between siblings that can be uniquely bitter.

The films shift in tone is its biggest asset, as it never settles into a comfortable or predictable rhythm. The rural quirkiness is undercut by genuine tragedy, while the most bitter disagreement is softened when a dog is used as a kind of passenger puppy.

Taken together, we're left with an exceptional work, one that deftly navigates its emotional peaks and valleys to craft an artistic but entirely accessible work. The performances are raw and believable, the storyline unique yet feeling like an ancient parable. The film is at times delicate, at times brutal, but never succumbs to the tedium that often beset films that simply linger on the landscapes in lieu of actual accomplished storytelling.

It's this finely honed balance that deserves to be celebrated in Rams. It's an impressive accomplishment if only for how it makes something that's genuinely difficult look perfectly easy, providing audiences with a film that's emotionally complex and moving and using the best of its storytelling elements and sublime environment to tell this lovely narrative.