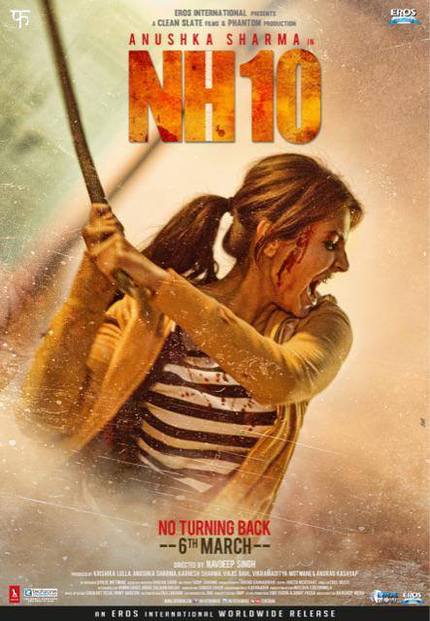 One of the many highlights of my Badlapur screening last night was the opportunity to see the new trailer for Navdeep Singh's upcoming thriller NH10. The film, co-produced by Anurag Kashyap and Vikramarditya Motwane's (Lootera) Phantom FIlms and actress Anushka Sharma's Clean Slate Films, is a road movie starring Sharma that has a very edgy backwoods feel and I'm digging it.

Anushka Sharma is an actress that I've long held in high regard. Her debut alongside box office juggernaut Shah Rukh Khan in Rab Ne Bana Di Jodi was a solidly entertaining film, and she's managed to carve out a nice career for herself so far. Not every film she's been in has been a hit, but even those that aren't can brag of her presence as a bright spot. So far in her career she's taken on relatively lightweight, though engaging, roles but NH10 is definitely a departure from her usual bubbly screen persona.

Sharma stars as a woman who, along with her husband, finds herself at a roadside cafe on the desert road toward Punjab witnessing the abduction of a young girl. When her husband, played by Neil Bhoopalam, attempts to intervene everything goes pear shaped and the two end up fighting for their lives. The trailer conveys a proper sense of dread and excitement and I'm excited to see how it plays out on screen.

NH10 had been set to release on March 6th, but as of this morning its release has been postponed. The post-MSG Indian censor board recently released a comical list of words and phrases that will not be permitted in films if they are seeking certification, and since this looks pretty edgy, it's apparently run afoul of the newly (even more) conservative board, pushing back the release at least a week while the two sides attempt to bridge the gap without sacrificing too much.

All I know is that whenever the film releases, I'll be there, it definitely looks like it will be worth your time. Check out the trailer below!