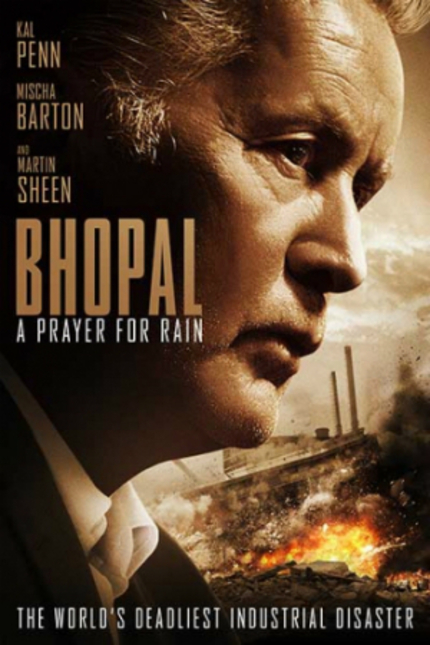 It's one thing to glance at a headline about a terrible tragedy. It's quite another to witness actions over a period of months that eventually lead to a horrifying disaster.

Inspired by a true story, Bhopal: A Prayer for Rain, directed by Ravi Kumar, rewinds to India in 1984, as a pesticide plant owned by Union Carbide India Limited, a subsidiary of U.S.-based Union Carbide, operates under increasingly shaky conditions of safety. Dilip (Rajpal Yadav), a local resident who is grateful for any job, starts as a cleaner at the plant and steadily moves up the work ladder. He is only too happy to be able to support (modestly) his wife and children, and his loyalty is rewarded.

Dilip is befriended by Motwani (Kal Penn), a scrappy journalist who publishes his own scrappy broadsheet. MotwanI is eager to promote himself, but he also knows about past troubles at the plant, and has a genuine desire to make the public aware of the dangers posed. In the years since the plant was built on the outskirts of Bhopal, shantytowns have grown toward it, which provides little room for error on the part of the plant and its potentially dangerous chemicals.

The plant is manufacturing MIC, a poisonous chemical intended for use as a pesticide, though its proximity to a growing population is of obvious concern. Union Carbide CEO Warren Anderson (Martin Sheen) pays a brief visit to Bhopal and sounds sincere as he encourages the workers. He even invites a reporter along who claims to be with the Associated Press, and is courteous even when her questions are more direct than he expected.

The latter sequence is typical of the film's approach. The reporter (Mischa Barton) is a lifestyle photojournalist for Paris Match who is initially content to snap a few photos of the city before rushing back to the airport. But then Motwani invites himself along and convinces her that the developing Union Carbide plant story is a vital and important issue, and very quickly she is transformed into a crusading investigative reporter, hurling accusatory questions at the visiting U.S. executive.

Much of the film plays out in a similar fashion, cut out of very sincere cloth, but arranged in a pattern that is all too predictable. As a drama, Bhopal: A Prayer for Rain is all too familiar in the terrain that it covers. Yet when things go fatally wrong at the plant, it cannot be denied that the events depicted are heartbreaking.

Anyone with even a touch of human empathy will be moved with anger and/or pity, and perhaps that's the one thing intended by the filmmakers: that more people become aware of this and similar situations that continue to exist in the world today, and continue to endanger thousands of people.

The film is now available on Region 1 DVD from Revolver Entertainment, and is also available to watch via various Video On Demand platforms.

Bhopal: A Prayer for Rain