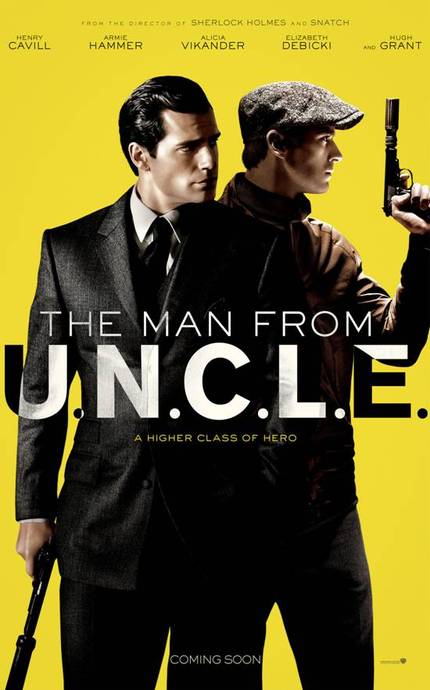 So, Superman and The Lone Ranger meet in a bar and the result is ... well, rather a lot different than what I expect would have happened if Steven Soderbergh had directed this thing as originally planned but the first trailer for Guy Ritchie's The Man From UNCLE is here and it would appear that between this and Kingsman: The Secret Service - directed, of course, by Ritchie's Lock Stock And Two Smoking Barrels and Snatch producer Matthew Vaughn - it would appear that there's a move afoot to make the whole espionage thing into a bit of good, escapist fun again. Cue socio-political commentary are harder to sell to audiences these days here.

Henry Cavill ("Man of Steel") stars as Napoleon Solo opposite Armie Hammer ("The Social Network") as Illya Kuryakin in director Guy Ritchie's "The Man from U.N.C.L.E.," a fresh take on the hugely popular 1960s television series.

Set against the backdrop of the early 1960s, at the height of the Cold War, "The Man from U.N.C.L.E." centers on CIA agent Solo and KGB agent Kuryakin.  Forced to put aside longstanding hostilities, the two team up on a joint mission to stop a mysterious international criminal organization, which is bent on destabilizing the fragile balance of power through the proliferation of nuclear weapons and technology.  The duo's only lead is the daughter of a vanished German scientist, who is the key to infiltrating the criminal organization, and they must race against time to find him and prevent a worldwide catastrophe.

Do you feel this content is inappropriate or infringes upon your rights? Click here to report it, or see our DMCA policy.
armie hammerguy ritchiehenry cavillman from uncletrailer

More about The Man From UNCLE