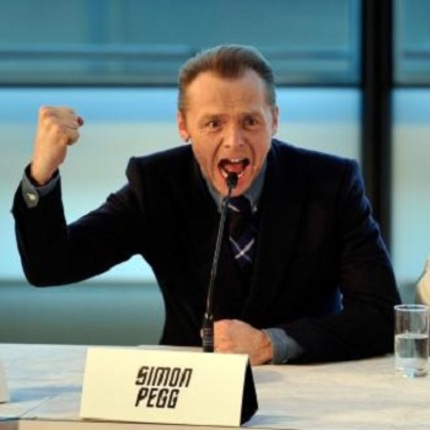 Deadline reported last night that 'Tim Beasley' is writing the script for the third Star Trek film.
Simon Pegg. One of our planet's most successful and well known nerds has landed the writing gig for the third Star Trek film. He will co-write the script for Justin Lin's film with Dark Blue's Doug Jung.
This is going to make some people happy. This is going to make some people not happy. For certain Pegg is very passionate about his role and part in this new Star Trek franchise, as his comments about Into Darkness haters in an interview with HuffPost in 2013 will tell you (Question #3 when you are looking).
Here is what we can be sure of. Pegg is a funny man, so the humor and fun will remain. Pegg is also a devoted nerd. Right, he may be a Star Wars nerd but I still think he will remain faithful to the cause.
Have at it...
Tweet Post Submit

Do you feel this content is inappropriate or infringes upon your rights? Click here to report it, or see our DMCA policy.
Doug JungJustin LinSimon PeggStark Trek 3