Humanity's fascination with the microchip started long before they became everyday necessities for the first world population.
You see, we humans have always taken strides for some semblance of consistency and structure through networks and grids. Design and architecture in the 20th century was of such a grand macro scale. Just look at our most stunning cities. Even in all their seeming chaos... they thrive. Consider then how they inspired the micro worlds that now hum inside our pockets, on our desks, by our ears everyday. The micro has power over the macro. That is indeed stunning, and if Michael Mann is attempting to say anything about it with his new picture Blackhat, very, very scary. But what kind of commentary does Blackhat aim for in regards to our society, the microchip, hacking and cyber terrorism?

What started out as science fiction allegory, the ideas of a cyber world soared to new heights with the prophetic cyber-punk fiction of William Gibson. In the 1990s, Hollywood, always the reliable sensationalist, catapulted the ideas of a cyber world with cyber crime and cyber terrorism, with such films as the immaculately loony The Matrix and the hilariously misinformed The Net or Hackers. It is only in just the past few years, and more so in the last few months with the now infamous Sony Hack, that cyber terrorism, whether targeted at a country's government or multinational behemoths, has very much segued from sci-fi fluff (nee foreshadowing) to real world threat.

Enter Mann and Blackhat from first-time-credited screenwriter Morgan Davis Foehl. This movie perhaps couldn't have arrived at a better time to give us a hard look into our changing digital world. And yet what it does on its arrival is nothing of the sort. In fact, it mostly feels like it does, well, nothing. Chalk that up to Foehl's lousy, illogical script, full of messy attempts at characterizing a high-tech world, plus the grave miscasting of ab-fab Chris Hemsworth as supreme hacker Hathaway. As for audiences who are curious as to what Mann brings to the table, that would be a pretentious, dead-eyed machismo. It is a flicker of the director's former glory, from the calculated thrills of Thief to the symphonic wellspring of adventure in The Last Of The Mohicans and hammer-heavy indictments of The Insider.

Blackhat is driven by a shoestring scavenger hunt style plot where the recently imprisoned Hathaway, his old hacker pal now Chinese official Chen (Wang Leehom), Chen's private sector sister Lien (Tang Wei), and FBI agent Barrett (Viola Davis), must track down a hacker who used an old code created by Hathaway and Chen to mess with the stock market and overheat a nuclear reactor. Because if you start there, then you gotta have an even bigger end game, right? Their search for the mostly faceless, and ultimately nameless baddie takes them from Los Angeles to Hong Kong, with a final act reveal in Jakarta.

What should be a high stakes game of cat and mouse remains consistently fuzzy and tension-free. An attempt to retrieve an important server from a radioactive hot spot would be a nerve-racking set-piece in most solid thrillers, silly or serious, but in Blackhat it is barely a blip on the plot's increasingly dim radar. Plodding to a middle point with sights set mostly on aimlessness, the film then uses one of its three major action scenes to fully shift gears from the aforementioned scavenger hunt-style mystery to a revenge thriller that can only be described as Hollywood attempting to cash in on the Edward Snowden story via Jason Bourne. Foehl and Mann's need to inject the film with some renewed vitality and emotion at this point came far beyond any goodwill I had left for their efforts.

From there on out the film attempts to dazzle us by revealing our mystery hacker's master plan, a save-the-day trifecta that involves the well-being of both corporate and natural resources and the lives of poor, innocent Malaysians. 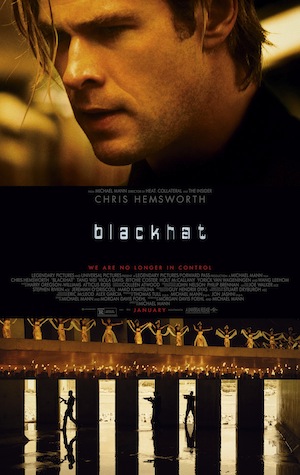 What initially may be drawing people to the theater is the promise of the film's action. Mann persists in his penchant for dreamy abstractions of violence, but only astounds in inducing headaches. There are three major action set pieces in the film, none memorable on their own terms. They merely act as pale imitations of scenes from Mann's Heat, or else pale imitations of scenes inspired by Mann's Heat.

These scenes are further marred by wretched digital cinematography. While Mann was an early adopter of digital cameras, Blackhat may be the new studio-backed poster child for supremely ugly digital cinema. Each action scene suffers from in-camera tech issues such as inconsistent focus, and dropped frame rates. For a film of this size, this feels frighteningly amateurish. The film skit-scats back and forth from clean tracking shots to herky-jerky handheld with abandon, only finding any sense of craftsman level beauty and measured effort when attempting to be a tourist postcard for China.

What actually offers moments of fascination is the film's opening, the only moments in the entire piece which give considerable visual life to the world of computers and hacking. What may feel like a gimmick on paper results in a five minute ride along the microchips, a seemingly alien world glowing and buzzing with activity, devoid of dialog, devoid of flesh. This becomes an intriguing post-human moment, far more reminiscent of an installation or experimental film. In turn these micro images parallel Mann's macro lensing of cityscapes, creating a surprisingly ruminative abstraction on the scale of literal spaces. For what is the difference between the glow of a server bay and the neon snake sparkle of Hong Kong but its size?

That feels like a good transition to note that certain ScreenAnarchy readers will no doubt see echoes of Johnnie To crime thrillers during the film's Hong Kong set sequences. Though don't expect to find much delight in such base allusions. As political and cultural representation of the country goes, everything remains rather neutral. Neither the American or Chinese governments are deemed incompetent, mean-spirited or corrupt, indeed because the scripting is too bland and/or confused about its own parts to understand or desire much of anything from anyone.

Speaking of anyone... I have heard tell of Hemsworth's charisma as a performer, but this is nowhere to be found in Blackhat. While mainstream audiences have accepted and celebrated for decades the often preposterous, sometimes glorious nature of action stars that were birthed from say... Frankenstein's monster's gym, Hemsworth is unable to measure up to the likes of Stallone or Schwarzenegger. When comparing him to Mann's other leading men, he doesn't hold a candle to the natural, clear-eyed charisma of Daniel Day-Lewis, the intensity of Pacino or De Niro, or the electricity of Tom Cruise. In short, Hemsworth is a log.

The supporting cast fares no better, with Viola Davis scouring through a thankless one-note role, while Tang attempts to bring some beat of the heart to an otherwise cold movie. On a positive note the supporting and bit player casting is refreshingly multi-ethnic, with even Davis' FBI superior played by Hispanic actor John Ortiz. Sad then that one of the film's ironies is that all stakes are settled by just a couple of white guys. And as that goes, it feels like a painfully pointless climax, despite the fact that, you know, Chris Hemsworth just saved countless lives and billions of dollars in resources with merely a screwdriver and a butcher knife.

All this to present the rather simple argument that Michael Mann's last good movie was 2004's Collateral.

Do you feel this content is inappropriate or infringes upon your rights? Click here to report it, or see our DMCA policy.
blackhatchris hemsworthcyber attackcyber thrillermichael mannthriller