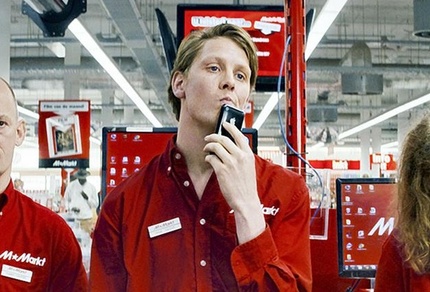 This year, one film was the surprise grand winner at the Dutch Film Festival where the Golden Calves are awarded, which basically are the Dutch Oscars. Director Michiel ten Horn's Aanmodderfakker won Best Film, its writer Anne Barnhoorn won Best Script, and its lead Gijs Naber won Best Actor. A few months later it arrived in Dutch cinemas, and last week I finally got to see for myself what all the commotion was about.

Thankfully, once again my general misgivings with Dutch cinema were notable for their absence when I saw this film, as director Michiel ten Horn has consistently outsmarted most of the pitfalls which our national filmmaking industry so often falls victim too. Time for a review! 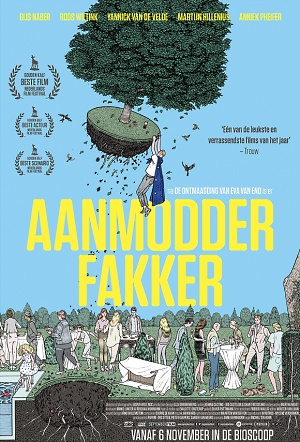 Thijs is what the Dutch call "an eternal student". Enrolled into university year after year, but never finishing any degree, Thijs just loafs about in his shared apartment, getting by on his rich parents' allowance and a part-time job at a local electronics mall. Days are spent endlessly smoking, drinking, acting cool, borrowing money, missing classes, chasing the odd girl, and browsing the Internet.

But of course this life slowly but surely starts to crack. At thirty-two, the age difference with his compatriots becomes ever more noticeable, and Thijs' efforts to keep the world around him from changing look more pathetic each day. Then, one evening, Thijs meets his sister-in-law Lisa, a precocious student half his age, who is super-ambitious. And though Thijs realizes she is MOST DEFINITELY off-limits, and will probably mean the end of his life as he knows it, opposites attract... and he is notoriously spineless.

Time for a title explanation: the Dutch word "aanmodderen" means continuously doing something without achieving a goal. "Modder" means mud so you can link this to "mucking about". And "modderfakker" is... a phonetic joke you can work out for yourself. All in all, Aanmodderfakker is indeed a good single word to sum up its protagonist Thijs.

Thijs seems to be getting nowhere, but that is only when you look at the short term. In the long term, he is of course headed straight for disaster and personal bankruptcy, though he stubbornly refuses to see it. His life looks cool and hip on the outside, and is mistaken by many, including himself, as "freedom". But instead, a debilitating fear of change has him stuck in a locked routine.

Gijs Naber plays this asshole excellently, not going for the "lovable loser" aspect at all but fully exploiting his irritating immaturity. From the way he replies "Yeah-HES!" like a five-year-old whenever he feels nagged (often) to more serious scumbaggery when he feels inferior (often), Thijs seems real, exaggerated, unbearable and hard-to look-away-from, all at the same time. While some of the other actors may occasionally brush the "line-reading" wall so often painfully apparent in Dutch cinema, Gijs has no weak moment in the entire film, a good thing too as he is the focus of every single scene.

The story of a man-child stuck in arrested development has of course been told often before, and even has several sub-genres and sitcoms dedicated to it already. So if Aanmodderfakker has anything going against it, it would be the familiarity of most of the jokes and situations.

Thankfully, what saves it is an extra veneer of polish and intelligence which most other efforts in this category lack. Careful attention has obviously been paid to the script, in which (title aside) even the word jokes all turn out to be translatable to English. I mean, that's clever! Little details click as well, as throughout the film Thijs inadvertently shows that he is actually capable of learning and growing, despite himself. There is also a willingness to play with rom-com expectations, and there are some moments of magical reality which may not cater to everyone's tastes, but worked for me.

All in all I had a far better time than I expected. While it perhaps is not original enough to be considered brilliant, it is a fun film and very well made. In the world of Aanmodderfakker, sweet never becomes cloying, damage is done, reality can never be escaped indefinitely, and the passage of time doesn't just instigate growth: it clearly demands it. 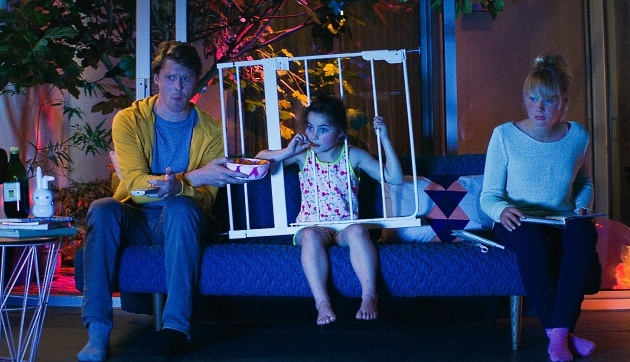