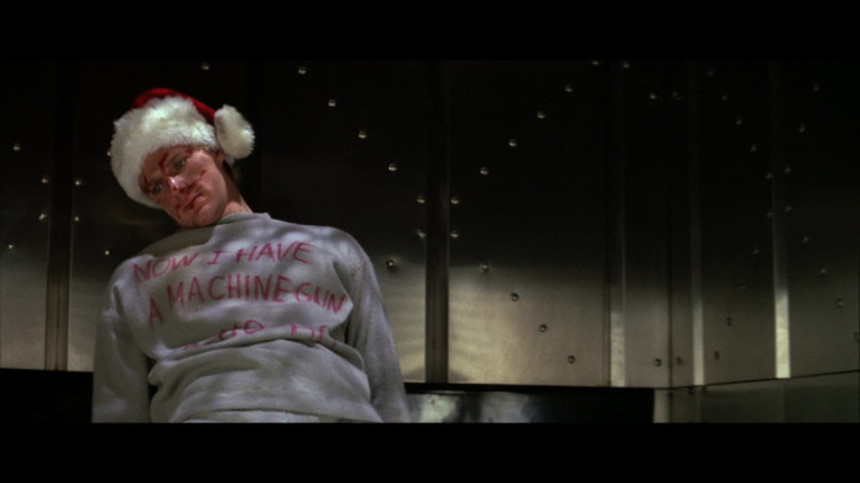 So the holiday season is thick upon us and I have to be honest with you all -- it is my favorite time of the year, especially now that I live in New England.

When I lived in Los Angeles, Christmas was the only day of the year where you could drive the length of the city unimpeded by an armada of cars, motorcycles and trucks endlessly self-replicating like Tribbles.

The reason I love the holidays in New England isn't the change in the weather but the change in the attitude: New Englanders are, by and large, miserable human beings, the legendary "Curse of the Bambino" malaise surrounding generations of Red Sox fans merely a convenient shroud to cloak their misanthropy in.

(Only here could you have people literally pulling their hair out over a rank baseball season -- cries of "They suuuuuuuuuuuuuck!!!" echoing nightly over the summer -- just a year removed from their third, and most improbable, World Series victory in ten years. But I digress...)

Once the post-Thanksgiving shopping season kicks in, I notice a rare softening to that Yankee hard-shell exterior, a few more nods to passing strangers than usual, even an occasional smile. Sure, the weather still stinks, but if I try -- and I try REAL hard -- I can almost think I'm back in the 9021-something.

But west coast or east, one thing I've encountered at every Christmas party I've been to in the last twenty years remains consistent regardless of geography. No matter where I am, I will reach New Year's Day unable to count on my hands and feet the number of times I hear: "You know, I have an idea that would make a GREAT movie!"

Depending on how much 150-proof egg nog the person has had, I usually indulge them, listening actively to this can't-miss tale. I try to follow along as the person almost invariably backtracks to add some details that, in the grand scheme of their story, are relatively meaningless to it.

Eventually, they wrap up their pitch and ask me what I think ("Amazing!" is usually my response) which quickly leads to the inevitable:

"So. You wanna write/produce/direct it?"

It is at this point that I politely beg off, offering any one of a number of finely crafted, time honed (and relatively honest) excuses:

"It's interesting but, unfortunately, I'm booked on assignments for the next few months."

"I'd love to work on something like that but, unfortunately, I don't have the background in that genre to do it justice."

"It's an amazing story and I'd be honored to be involved but unfortunately... Hey! Look!! Bigfoot!!"

And I'm not even saying that these tales are (necessarily) bad.

In fact, many of the stories I've been pitched this way have a truly magnetic quality to them (the reason the person remembered them to begin with) and often reveal some kind of resonant truth about the human condition, whether it be inspiring or disheartening.

But whether the tales are enthralling or not very interesting, they are almost always united by one simple fact:

They are not movies. At all.

Some of you reading this may be thinking, "Hey, I have a story that would make a great movie!"

That doesn't mean that you don't have a great story.

You very well may.

It's just that, as compelling as the tale may be to tell and to hear, it is unlikely to make for a very compelling, ninety-plus minute movie.

The history of the human race is story, starting with cave paintings and moving all the way through to today's high-definition, Oculus Rift-style immersive environments.

We are marinated in story from the time we are born, both in the hearing and telling thereof . So much so that we all consider ourselves experts on the "business" of storytelling in a way we never would another occupation.

(No one comes up to a surgeon at a Christmas party and says "You know, I think I have an innovative way to transplant a liver.")

And, in some ways, that belief is valid -- we are all experts at consuming and, to a certain degree, creating stories. We do it at work, we do it at play. Telling stories as a way of communication is a cornerstone of the human condition.

But all of that being acknowledged still does not translate into expertise at understanding CINEMATIC storytelling.

When it comes to storytelling for film, there are myriad criteria - varied and specific - that need to be met in order to first get the film made and to reach an audience beyond the filmmaker's family: characters that will attract good actors or stars, striking visual elements and a core of humanistic truth running through it, etc.

Most of the time, stories we "think" would make for great cinema fall short of meeting all of the necessary cinematic criteria.

Obviously, there are exceptions.

Nobody I know -- including some execs at the studio at that time -- ever thought Moneyball's great script could be adapted into an interesting film but it was; conversely, one wouldn't be entirely cynical to look at some studio films and conclude that the interest certain actors have in their roles is financial more than artistic.

(And, parroting William Goldman as I like to, nobody knows anything. Years and years ago, I pitched Frank Miller's 300 to my boss after I had gotten a sneak look at the early sketch galleys and was told "Swords and sandals?? That's no movie!" proving that in addition to "exceptions", there are also "idiots".)

Occasionally after one of my soft Yuletide passes, I find out that the person has ignored my opinion, gone ahead and -- taking the bull by the horns -- has committed to seeing the story through by writing a script themselves.

When I hear something like this, I always have the same thought:

There are few things harder in this world than committing to something creative like that, something where you are putting a part of your innermost, truest self out there for criticism -- even if only from yourself -- and anyone who does it to ANY degree has my honest admiration and sincere respect.

But that still doesn't mean that their script can actually prove to be a "movie".

Many people often make the mistake of looking at what they consider to be "bad movies" -- pick any number of Hollywood's bigger releases -- and think that it must be easy to run that commercial gauntlet if you arrive with an end product so clearly misshapen and dissatisfying.

I'm going to let you all in on a little secret:

(Yes, you in the back row, even Michael Bay.)

And while there are some who aim for "good enough" (and you can guess who they are because they fail to reach even that modest target), no one wants to make a movie where people leave the theater or shut off their TV and say: "That sucked."

Getting any movie of any size made -- be it studio or independent -- is such a brutally difficult endeavor that no one enters into it quite that glibly (at least no one I know or would want to work with).

And while few will verbalize it (at least to the screenwriters), everybody knows: a movie lives or dies with the script.

While plenty of bad films have been made out of great scripts, no great movie has ever been made from a bad script. It is both a paradox and a truism of the business of movie making.

Often, I hear novice writers or sideline critics crucifying Hollywood screenwriters by name, wondering why "they" get to work "again!!"

We all know who the frequent targets are:

Much like the Bostonians lamenting an off season for the Red Sox, this army of armchair filmmakers lets loose with a collective "They suuuuuuuuuuuuuuuuck!!"

It's funny -- no one thinks they can beat the sixth-man on the worst NBA team in a game of horse, yet everyone seems to think they can out-write James Vanderbilt.

Unlike most people who like to lob hand grenades at them, all of the above-mentioned writers know "the rules" and when and how they can get away with breaking them. Most of the grenade-throwers I meet think "rules" are for hacks.

I had someone give me a script once. It was 144 pages. It was a romantic comedy. I told the writer that no one makes a two-hour-plus romantic comedy (they told me to pound sand). To the best of my knowledge, said script remains unproduced.

One other thing that all professional writers understand: it is all about the script.

Didn't I already say that?

What I mean is: these writers understand that the movie relies on THE script - not necessarily THEIR script.

Much like the United States Constitution, a movie script is a living, breathing document. It evolves over time, taking into account factors that never existed when the story was just a germ of an idea fighting to get attention in the writer's mind - budget realities, location changes, actor's insecurities (or, worse, grandiose ideas), executive "suggestions" - and these factors do not relent in their assault until the final edit of the film (often called the last "version" of the script) is locked.

It takes a tremendous reserve of skill and talent to be able to shepherd a screenplay through all of that and an amazing level of confidence to not let ego submarine the entire process. These "hacks" do all of that again and again.

Any story can be made into a "script", akin to a meal prepared by a single chef, every dish and course bearing their unique stamp and imprint, truly theirs.

But every "movie" is a mélange of influences, a single dish made by dozens of chefs, all working at the same stove atop each other, trying to create something not just edible but memorable (in a good way).

As we enjoy good meals with good friends during this festive season, let's all take a step back and appreciate all the hard work that goes into creating those meals in the first place.

And, please, find me at the next party -- or people like me who work in the industry -- and tell us your stories. We (mostly) love to hear them.

Just don't feel slighted if we don't want to spend the next three years of our lives forcing their square-pegs into the round-holes of an unforgiving silver-screen.