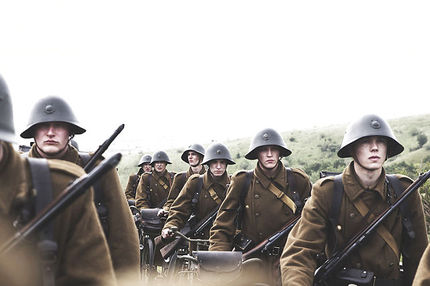 Though increasingly recognized around the world as one of the finest young directors to come out of Scandinavia in recent years, A Hijacking helmer Tobias Lindholm first built his name as a screenwriter and it's an area he remains very much involved in. And while Lindholm is currently working away on his own contemporary war picture as a director he'll first be present on Danish screens as the writer of WWII picture 9 April.

In the early morning of April 9 1940 the Danish army is alerted. The Germans have crossed the border; Denmark is at war against Europe's strongest army. In Southern Jutland Danish bicycle and motorcycle companies are summoned in order to hold back the forces, until the Danish reinforcements can be mobilized. During these crucial hours we follow second lieutenant Sand and his bicycle company. They will, as the first Danish soldiers, meet the enemy in combat on April 9 1940.

Roni Ezra directs with frequent Lindholm collaborator Pilou Asbaek - who's been awfully busy for a guy who keeps talking about stepping away from acting for a bit - starring. Check the trailer below.

Do you feel this content is inappropriate or infringes upon your rights? Click here to report it, or see our DMCA policy.
9 aprilpilou asbaekroni ezratobias lindholmtrailerwwii