Cairo 2014 Review: DECOR, A Modern Meta-Twist on the 'Woman's Picture' 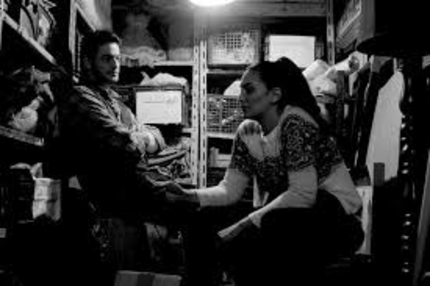 Maha and her husband Sherif are talented set designers, who have been hired to work on their first commercial film (as oppose to the independent, art house films they usually prefer). On the first day of shooting, when Maha is setting the scene, she turns around to find that the set is a real place, the crew, including her husband, have disappeared, and she is living in an alternate reality with a different husband, Moustafa, a daughter (she and Sherif do not have children), and a job as an art teacher. She finds herself moving between the two realities, no longer able to decide which one to which she belongs.

Director Ahmad Abdalla (Microphone, Rags and Tatters) and screenwriters Sherin Diab and Mohamed Diab have made a film that is a postmodern, very meta-narrative twist on the women's pictures of the 1950s. Heartfelt without being soppy, intelligent and rather feminist in its perspective and direction, Decor is a highly enjoyable film, that keeps a steady pace and entertaining tone.

This is a film that wears its 'subtext' on its sleeve: has Maha created a false life, a false sense of happiness, and if so, which reality does that apply to? In one, she has a successful career in an area where not many women success, and she has a happy marriage and work life with her handsome husband; but they have no children, which seems to be Sherif's decision more than Maha's. In the other, she has a daughter she loves, and her mother is still alive, but her job is unfulfilling, and her marriage unhappy. It might seem obvious at first, that she should pick the life with Sherif. But is it so easy? No life is perfect, we often have to make sacrifices and not get everything we want (especially women). Is motherhood such a bad option? Is a life really unfulfilled without children?

Maha is obsessed with old movies, ones that tell of women struggling to find both independence and true love; and yes, I'm deliberately playing those against each other, as it becomes clearer to Maya and the audience that often, love and marriage can mean too much of a loss of independence. Everyone in both realities - her husbands in both, her therapist in bth, her mother in one - keep trying to convince her that one or the other is real for various reasons. But it must be Maha's choice, and as the real reasons behind the manifestation of the alternate reality (one she is encouraged to explore by her therapist) are revealed, it comes down to Maha having to have the strength to follow her own path.

Shot in gorgeous monochrome, the lack of colour adds to the story's richness, and the ambiguity of the lives that Maha is living. But this is a film about design: how we design our lives, our wardrobe, our homes, our careers, and how that design is perceived by ourselves and others. Perfection is not always possible, or even desirable, and Maha slowly learns this over the course of the film. This is aided by a wonderful performance by Horeya Farghaly, whose descent into a sort of madness is tempered yet believable. She is not attempting to stand in for every woman, but this character's particular situation.

Abdalla, while honouring Sirk, luckily does into melodrama; instead, he turns the perception of cinema onto itself, using film within film to examine how we see our own lives, and what we seek to emulate. The conclusion is both surprising and really, the only possible outcome, a refreshing change from what many films, especially more commercial ones, might have given the 'design' of female characters and their lives.