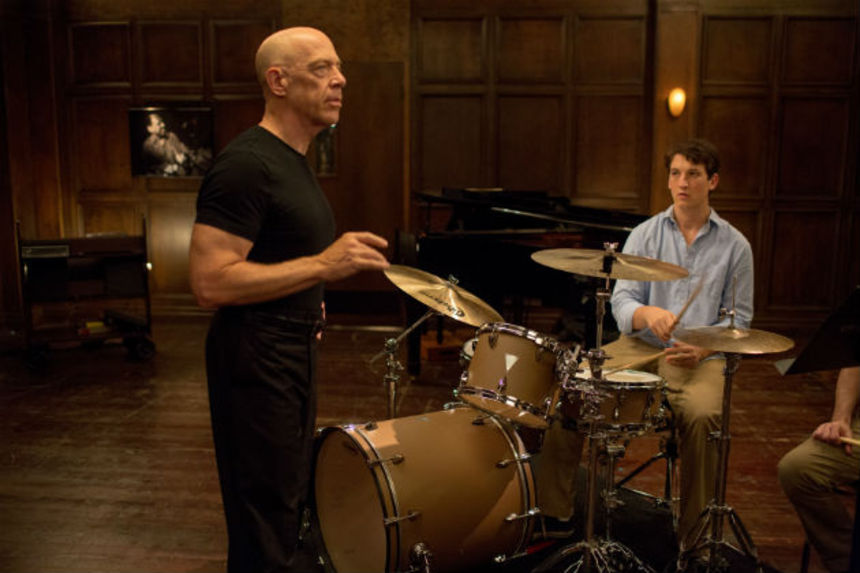 It's a pretty quick turnaround to go from Sundance 2013 award-winning short film to Sundance 2014 opening nighter. But for 28-year-old director Damien Chazelle, when opportunity knocks, there's no need to bide your time. It's no surprise that Jason Blum and Jason Reitman believe in this young director enough to produce this sophomore feature; a movie truly brimming with confidence. Chazelle is a serious new talent, and with Whiplash we're just starting to see him flex his muscles.

Expertly wielding his sharpest tools, Chazelle has cast Miles Teller as Andrew, a talented young drummer in his first year of study at one of the country's best music conservatories. Teller is one of Hollywood's finest young actors, and his Andrew is meek and lacks confidence - in stark contrast to his role as Sutter in The Spectacular Now. But Teller never falters and Andrew quickly comes to life through his nervous interactions with the cute theater concessions worker or his forced-to-retaliate outbursts in front of his derisive extended family.

The real meat of the story is Andrew's drive to succeed at his one true passion of drumming. His foil comes in the form of J.K. Simmons's Terence Fletcher, an insult-spewing instructor who the students hold in total reverence, even if it means being driven to tears on a regular basis. While boundaries are a meaningless concept to Fletcher, winning his favor can mean a fast track to success as a jazz musician, making all the punishment potentially worth the pain. That theory is put to the test when Andrew catches Fletcher's eye. Does Andrew have what it takes to be the best - and can he survive Fletcher's tough love to get there become the central questions of the film.

The movie is structured as a battle of wills between the two characters, but at the same time, it's a true battle of skills between the two actors. J.K. Simmons has long been celebrated as a character actor of the highest quality. Here he expertly walks the tightrope of a man so convinced his extreme actions are justified that he is actually somewhat likeable. But young upstart Teller is not to be outshone and his tit-for-tat dramatic beats fire a salvo right across Simmons's bow. Given the physical difficulty of so many drumming sequences, it's hard to make a case against calling the competition for the newcomer.

The real winner of the battle is Chazelle. Given the limited scope of a relatively few locations and some very long sequences not allowing for a ton of development, the director has crafted an incredibly engaging experience. This is helped in a huge part by his stylistic decisions, such as extended extreme close-ups and some of the best diegetic music in recent memory.

A few plot contrivances notwithstanding, Whiplash is an expertly crafted film, extremely entertaining, and one of the most crowd-pleasing Sundance openers ever. I guess that makes us the actual winners after all.

Review originally published during the Sundance Film Festival in January 2014. The film opens in select theaters in New York and Los Angeles on Friday, October 10 before expanding across the country, via Sony Pictures Classics. Visit the official site for more information.

Do you feel this content is inappropriate or infringes upon your rights? Click here to report it, or see our DMCA policy.
Damien ChazelleJK SimmonsMiles Teller