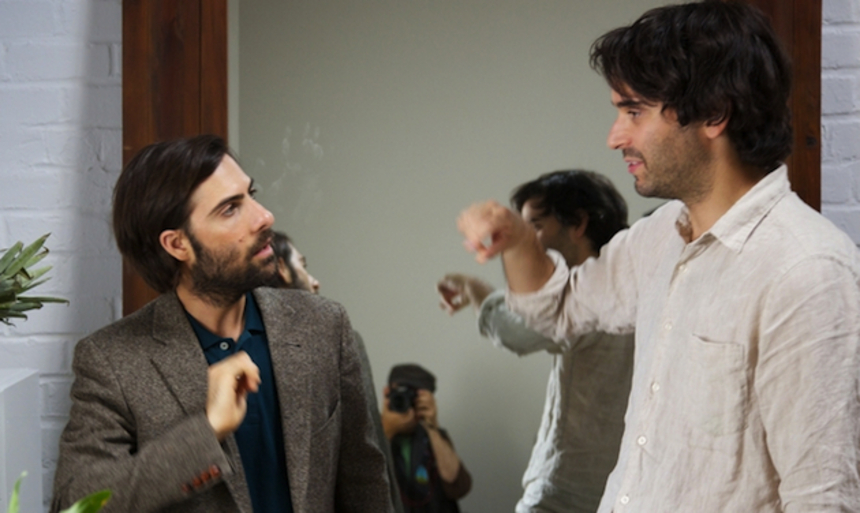 Alex Ross Perry makes no attempt to mask that the Philip of his new film Listen Up Philip, played to perfection by Jason Schwartzman, at least partly takes his inspiration from the daunted body of work of author, Philip Roth. Though Perry doesn't aim at any one Roth work in specific, he manages to evoke the tone of Roth's ideas far more effectively than other proper adaptations of his books.

Schwartzman plays Philip, a young writer anticipating the release of his second novel. Early praise is in, allowing relief from the burden of sophomore pressure, and Philip is growing accustomed to being lauded as a genius. Philip makes new friends, like a personal hero of his, writer, Ike Zimmerman. The elder author takes Philip under his wing, protecting him from progress-inhibiting parasites like friends and family. Girlfriend be damned, Philip accepts Ike's invitation to spend time at his cottage getaway, one Ike himself has found to be a creatively fruitful getaway from the distractions of those who love him.

Listen Up Philip reflects the cinematic aspects of Roth's work, which take an unsurprising cue from Woody Allen. Like Roth, or Allen, or any number of great narrative voices, Perry weaves his story episodically, allowing the supporting characters to come alive in their own right, as well as in their relationship with Philip, a trying character who unapologetically conducts himself as though he's the centre of the universe.

Alex Ross Perry expands his capabilities in leaps and bounds with Listen Up Philip, a sharply-crafted cautionary tale, warning of the dangers of vindication. In Philip's coming to terms with his success, validation of his neurotic hyper-honest talent detrimentally affects his personality, gradually giving way to esoteric expectations of the people in his life. There is only room for one in the life of a true narcissist.

Perry's a new talent that most indie-film fans first got wind of in 2011 with his low-budget film, The Color Wheel, a B&W road talkie that's as funny as it inevitably ends up being unsettling. But with the help of Jason Schwartzman, an excellent ensemble cast and a genuine zeal for the written word, Perry's potential comes alive with Listen Up Philip.

So, I wanted to do a movie about somebody like what you're saying; who at every point rather than saying, 'Wow!  I can't believe I did this. I'm so happy. I'm just going to finally relax and be the satisfied person that I want to be at every point'. Says, well yeah I guess this is what I wanted but I feel nothing so where do I go from here? In fact Philip even says that in the film. 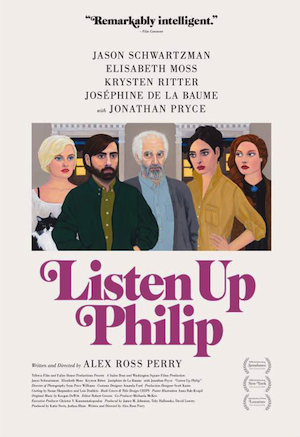 Jason, considering that you had success pretty early in your life, having starred in countless cinephiles' favourite film, perhaps you didn't necessarily experience pining for success in the same way Philip might've leading up to his success. To what extent could you relate to Philip's existential crisis of getting what you want?
JS: Well I think it's definitely existential because you never get anything you want, which is the obvious thing. I think it's two things. I definitely pined for success with my band that I was in for years. That was my dream, that kind of success... and I was seeing other people get that. But then also I realized that I was successful.  I got to tour the world (with Phantom Planet). I mean, yeah, we never got a gold record or anything but we got to do things that bands never get to do. So it's a success in that way. Then I got success with Rushmore. Obviously, my life changed because I was in a movie, but I never could understand this weird feeling until just recently.

I was talking to Alex about Los Angeles and New York. He was saying that 'Los Angeles was a place where success really is measured in huge things like $100,000,000.00 is a success. Whereas in New York, so many different things are going on and I know people whose lives change just because they made this $10,000 movie'.

I've never been in a movie that's made $100,000,000.00 - maybe Grand Budapest Hotel did worldwide, but I've never really been a part of that type of success. I suppose, in a way, without knowing it, I've pined for like - you see these other actors have a kind of thing where it connects with a super audience, but I totally don't feel like I need to connect to a ton of people really, to be honest with you... feel like I've connected with more people than I ever thought I would.
I absolutely have the best life and yet and I realize that everything's great, but I realize that Los Angeles is this kind of culture that, without even wanting it, puts in your blood a feeling that you haven't hit that thing, you're not this. I didn't really realize until Alex said, 'in that city, with the level of what is great, you have to do something that is a fuckin' tent pole type thing or else really you're not successful'. I only contextualize that too because people who would hear this would be like, 'wow, you've had success'. I know I've had success. I'm just saying you pine for stuff, Hollywood, it's designed to make you pine for that thing... which is rare.
In your respective climbs to aesthetic success, did you ever find yourselves with older, more esteemed figures in your life giving advice that might have been somewhat poisonous?
ARP: Well, yeah. I feel the dynamics between Philip and Ike Zimmerman - Philip is early 30s and Ike is obviously in his 60s - I've had relationships like that with people that are five, six, seven years older than me. It doesn't have to be someone of a different generation. It can be somebody that sort of presents themselves as the authority on something that you are going through.
I think that I definitely have had these relationships and it's just fun to have a friend or someone who you sort of become close with who you just enjoy watching them walk through the room like they know everything and they have all the answers.  Then at the same time I got to meet people at festivals; hero-filmmakers whose work I admired and I've become friendly with people like this. There's a line between sort of idolizing someone, meeting them and then having friends who are a little bit older than me. I was sort of working at the video store when I was 20, just sort of watching people that are two or ten steps ahead and just imagining what the rest of their lives are like when I'm not interacting with them.
JS: I feel like I've dated some girls that I looked up to and then they gave me advice that later was wrong. I've also gotten great advice from older people. Who knows if it's wrong or right. I don't know. I think it's hard because they're just doing what they think is right. I think it's up to you to make up your mind about whether or not it's going to work for you. I think for actors, especially when they're growing up, they read all these books about acting methods and things. What is the right way to do it? You take this advice but maybe not everyone's the same. I don't know.
One of my favourite moments of the film is the small montage of fake books written by Ike which, in passing, covers the evolution of the 1st edition aesthetics throughout the years. Do you have a favourite book cover jacket?
ARP: Thinking of the ones from the movie or in real life?
Real life.
ARP: That's a good question. Nobody's ever asked me that. I have a lot. I have a shelf of every first edition Philip Roth. The original cover for When She Was Good. It is a really beautiful, striking image; pretty good colors and designed really, really well.  That's a pretty major one for me.  Off the top of my head, anyway. That's the sort of thing I have to think about.
I like that your book cover montage replicates cover styles over time, from the illustrative jackets of the 50s, to the simple typeset title over colour in the 60s/70s and the transition to photography, and cool thin fonts in the 80s/90s... Does that sound sort of accurate?
ARP: I mean, yeah. There definitely was a design element coming up to the 60s that was illustrative.  Then it did become very reliant on fonts and typesets.  Into the 80s, I'm looking at the Philip Roth - those are just titles on a colored background. Then by the time of his 90s books, it's an illustration over an image or stock image, you know a famous work of art.
I'm not enough of a designer or a student of the history of that medium o really authoritatively say what the trends were and where they came from but I know what I like. Fortunately Teddy Blanks who did all the designs and studied things like, you know 'Well this font wasn't invented until 1986, so you can't use it on anything prior to that'. He really got it and was able to put those all into a chronological order that was authentic and lots of people respond to that from fans of collecting beautiful books to actual writers.
Jason, do you have a favorite book jacket?
JS: That's such a great question. Penguin put out this book of all their book covers and everyone of them is beautiful. I would say that I sort of like the more simple ones like Joan Didion's The White Album, which is like her name and it's white. It's just a white album. I like that. At the end of the day I think that's kind of what I would gravitate towards most likely.

Do you feel this content is inappropriate or infringes upon your rights? Click here to report it, or see our DMCA policy.
alex ross perryjason schwartzmanlisten up philip