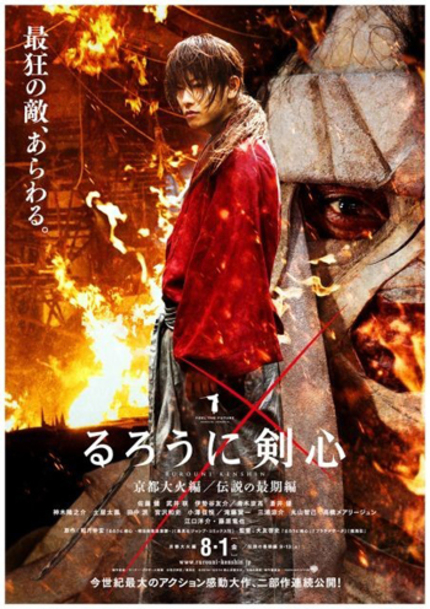 Satoh Takeru's wandering samurai returns in a sequel that improves considerably on the enjoyable first feature while setting the scene for the soon to follow finale.

The first film's strength was its high production value and visually exciting action scenes that really put it above many other manga adaptations that are so frequently hampered by TV aesthetics and distractingly awful CGI. Rurouni Kenshin: Kyoto Inferno impresses from the stunning opening onwards as it attempts to tell a much grander story with a marked step-up in characterization and a darker tone.

Setting the tone, we begin with returning character Saitoh, the chain-smoking captain of the new government's police forces as they closes in on fearsome renegade Shishio ( Fujiwara Tatsuya). The hapless police are slaughtered in quick succession by Shishio's vicious followers and Saitoh soon finds himself face-to-face with the feared villain himself. Stood amidst the fires of a self-made 'hell', complete with officers dangling on ropes above flames, Shishio is a bandage-faced demon spewing his philosophy of death and destruction like a crazed religious zealot. It's a spectacular, visually impressive opening, unveiling the protagonist in all his crazed, flame-licked glory and paving the way for the hero's epic quest.

Former assassin Kenshin is now living happily with his adopted family of Kaoru (Takei Emi), young student Myojin (Kaito Ooyagi), street fighter Sanosuke Sagara (Aoki Munetaka) and doctor Megumi (Aoi Yu) in Kaoru's now thriving dojo. Their tranquil existence is interrupted when Kenshin is taken to the office of President Okubo, the man who gave him his killing orders in the dark days before the Meiji restoration, where he learns that Shishio was the unstable successor to his own role as the top-most killer. Left for dead at the end of the war, Shishio survived and is gathering forces across the country with the ultimate aim of toppling the government and returning the land to a time of terrible violence and war. Kenshin is forced to set out alone to stop his crazed rival, while trying to maintain an oath he swore to lay down his killing sword for good.

Shishio is a truly excellent villain, visually imposing with his burned and bandage covered body, he's a vast improvement over the previous film's more comedic enemy and a more worthy opponent for Kenshin, providing a real counterpoint to the hero in his attitude and beliefs while matching him in speed and skill. Fujiwara Tatsuya is unrecognizable, buried as he is in heavy make-up and bandages, and he brings a scarred, demented arrogance to the role while Satoh Takeru's Kenshin, burdened by the pressure of his vow, is much more somber this time round, conveniently signposted by his new black garb. While there are still opportunities to add touches of the sweet natured playfulness of the character, the plot quickly gets underway and he is thrust out on his own, troubled with the knowledge that he may not be able to defeat the evil stacked up against him without resorting to lethal violence.

Heading towards Kyoto for a showdown with Shishio, Kenshin becomes sidetracked saving a village, making some new friends and showing off his spectacular fighting skills. As further characters come into play, added to the ones left at home who have decided to come out and join him, a subsidiary storyline is introduced involving a young girl, with a lover and her ninja grandfather, on a personnel quest for vengeance against Kenshin. The film risks throwing too many different story elements into an already crowded cast, although the elderly man and Yusuke Iseya's brooding samurai Shinomori do add one of the most thrilling fight sequences.

The battle for Kenshin's soul maintains the film's focus, with Kaoru, who doesn't get a whole lot to do, acting as his moral compass while a romance subtlety develops between them.
The film falls down most when it sticks faithfully to the source material in areas where it should perhaps have abandoned the wilder manga elements or adapted them to work within the live action environment.

This is most visible when certain comic characters intended to add a touch of light relief don't sit well with the more intense, action packed story. Giant-sword wielding street brawler Sagara was never fully fleshed out in the first film, and his motives for sticking around are still unclear. Sagara is obnoxious yet amusing enough to merit a pass while Shishio's unbearably annoying young protégé and messenger boy Seta's (Ryunosuke Kamiki) effeminate prancing is wildly out of place in the historic setting, as is ten swords gang member Sawagejo Cho (Ryosuke Miura), with his ludicrously bleached hair and boy-band vibes. While any flaws in certain characters are overcome by the strengths of the main cast, they could have done better in finding a way to retain the essence of the character while ditching the elements that can't possibly be brought to work in a modern live-action film.

Rurouni Kenshin: Kyoto Inferno satisfies with its mix of character drama and sword fights as it leads up to an intense battle on the streets of ancient Kyoto. By the time the sea-set finale roles around everything is left in balance for what promises to be an epic ending to this thrilling tale.
Tweet Post Submit

Do you feel this content is inappropriate or infringes upon your rights? Click here to report it, or see our DMCA policy.
mangarurouni kenshinrurouni kenshin: kyoto infernoSatou Takeru