In The Ring With BitTorrent: Todd's Complete Text From The Fantastic Debates 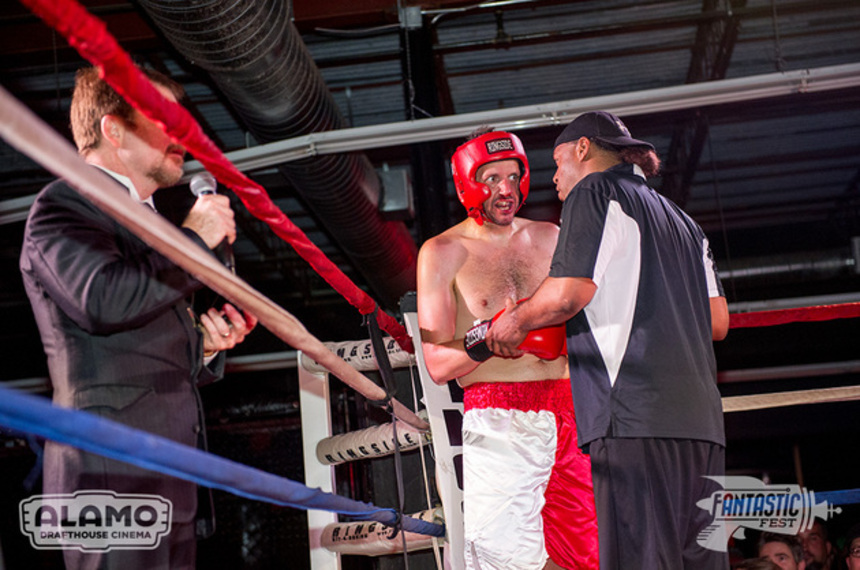 The night before last I took the opportunity to shake hands with Leonard Maltin. I was wearing only a pair of shorts at the time, sweat streaming down my torso and I may or may not have been bleeding. "Thank you so much for coming," I said. "You guys are all fucking nuts," was his reply.

Well, yes ... given the circumstances it would be hard to argue against that point. The occasion was the Fantastic Debates, an exercise in ritual violence that has become a cornerstone event at Fantastic Fest in which combatants square off for two rounds of point-counterpoint debate followed by two rounds of boxing. This was my third time participating, though only my second actually fighting - my first go around was in the very first year of the Debates in which participants only fought if the debate were judged a tie and I whupped Devin Faraci's ass in the verbal component, thus robbing myself of the opportunity to whup him physically as well - and very easily the one that I've taken the most seriously.

You see, in the opposite corner was Matt Mason - Chief Content Officer at BitTorrent - who had issued an open challenge for anyone to dispute his claim that BitTorrent was the savior of independent film. You can view that challenge here.  This is a claim that I - along with virtually everyone who actually makes films - very much disagree with and so I came in with the pressure of knowing I was speaking for a great many people. And also there was the fact that Mason actually boxes and I do not.

I have no recollection of anything that happened in the debates previous to my face off with Mason, I was too busy pacing around to try and control the waves of adrenaline back stage to actually pay attention to anyone else. Marko Zaror came back to run me through a few drills and offer some false hope (thanks, Marko!) and then it was time. Mason enters first, throwing BitTorrent swag into the crowd, which the crowd promptly throws back then up comes my entry music - Ship of Fools by Fucked Up - and away we go.

Though I didn't actually manage to get through everything I had prepared - the timing is very, very different once you're on stage with a crowd howling for blood - but here's the text of what I actually said and would have said if I'd managed to talk a little bit faster:

Well, hallelujah, ladies and gentlemen, raise your hands in the air and give thanks for BitTorrent is here to save us all and they're going to do it by ... being Bandcamp. The flaws in what BitTorrent is selling today are obvious and I would like to point out a pair of assumptions and one glaring omission that render BitTorrent's entire position false.

First, BitTorrent is assuming that what they're offering in their BitTorrent Bundles is, in fact, something new. You cannot revolutionize an industry by doing what others are already doing after all. But others ARE already doing this. Whether Distrify, Vimeo On Demand or literally dozens of other similar services this niche has already been filled. BitTorrent Bundles are NOT at all revolutionary they are entirely redundant.

Second, BitTorrent is assuming that access to market is the key issue facing independent filmmakers. It is not. The issue is that the market itself has been so wildly devalued by the massive levels of piracy fueled by BitTorrent. Thanks to the rise of BitTorrent we now have an entire generation that simply does not believe film is worth paying for. Why should they when they can take it for free? Any paradigm based on creators actually being able to SELL their creations is doomed to fail because BitTorrent has torn the guts out of the marketplace, a fact they simply refuse to acknowledge.

Which leads, of course, to the obvious omission - the fact that BitTorrent DOESN'T want us talking about, the fact that their software provides the basis for millions of acts of theft against creative people each and every day, to which BitTorrent says only, "Hey, we can't know what people use our software to do, we can't be held responsible for their behavior." Newsflash: Your users continue to use your software for the only damn thing they've ever used it for. The vast majority of BitTorrent's hundreds of millions of users use the software for the sole purpose of theft while its creators feign ignorance.

BitTorrent Bundles is nothing but an exercise in message control, a way of saying "Hey, look over HERE, we're such CARING people and we're doing our best," because if people are looking over HERE it means they're not looking over THERE where BitTorrent continues to provide the platform for millions of thefts every day. It's a matter of values. BitTorrent doesn't give a shit about creative people or creative industries, they care only about servicing their own user base and they know that if they were to actually address the issues of piracy they'd all be out of jobs themselves.

My boy is thirteen years old now and by the time Will was three he already understood that if he made a mess he had to clean it up. And for BitTorrent to deny responsibility for the mess they have created, for them to wash their hands of the issues brought on by the massive scale piracy they continue to fuel, is completely unacceptable. They can offer us nothing of value until they clean up their mess.

We do not need to imagine some brave new world powered by BitTorrent because we already live in a present powered by BitTorrent and we know exactly what that world looks like. We know that film, TV and music have shed 19% of the jobs they had just two years ago. We know we have lost entire tiers of production and distribution. And we know that the people most vulnerable are the independents, creative people working on their own without the backing of massive corporations to buffer them from the change.

Take the story of Filip Tegstedt as an example, for Filip's story could be the story of every filmmaker in this room. Filip is the writer-director of Marianne, a man who risked everything to achieve his dream - selling his house and taking personal loans to make the film he dreamed of making. And Marianne was a damn good film, going on to play festivals around the world to great acclaim. It should have been a success, would have been except someone uploaded it to a Torrent site before Filip had the chance to sell it for distribution and the resulting piracy eroded the market so badly that Filip has never been able to sell it anywhere. And now all he's left with is a mountain of debt that he will spend his lifetime paying off.

BitTorrent's response is only to say, "Well, WE didn't actually steal his movie." And that's true, they didn't. But they did something worse. By providing the platform for others to do so they stole Filip's opportunity to succeed or fail on his own merits. They took away his chance. Filmmakers like Filip don't need saving BY BitTorrent, they need saving FROM BitTorrent.

BitTorrent is, in every sense of the word, a parasite. It creates nothing. It adds nothing. It only grows fat from the blood of creative people. And while it's lovely that you're paid a fair wage for your work, Mr Mason, it's a travesty that you do so on the backs of technology that prevents entire industries of people the chance to do the same. And now you come here proclaiming BitTorrent a savior as you try to take a cut of what meager business is left to us and expect us to smile and offer our thanks. Well, I've got a message from Filip, and that's simply 'Fuck you.'

And then I got punched in the face.

Do you feel this content is inappropriate or infringes upon your rights? Click here to report it, or see our DMCA policy.
bittorrentfantastic debatesfantastic festmatt masontodd brown