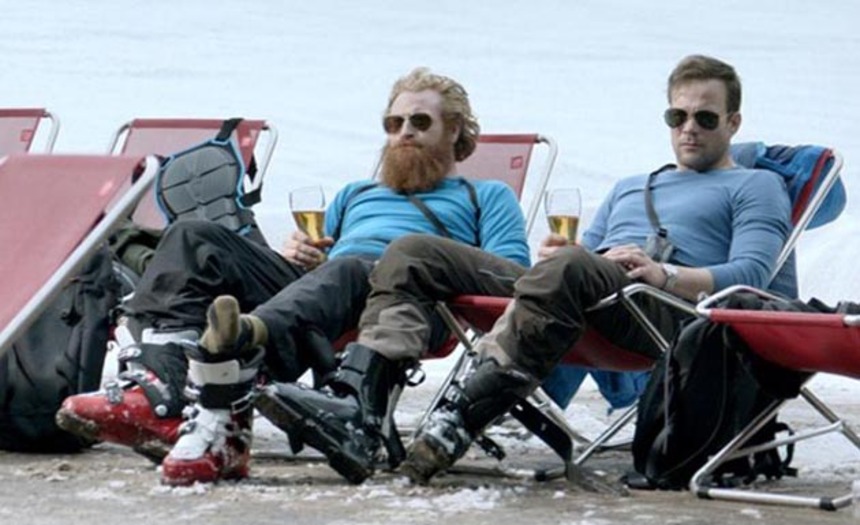 There is a certain kind of Scandinavian black humor that when done well, is just about the funniest comedy around. This was on prime display in Morten Tyldum's Headhunters from a few years back. That film took a crime thriller and injected it with a hilarious Norwegian sense of humor to a degree of success that few movies have reached since.

In Force Majeure, Swedish director Ruben Östlund attacks this challenge head on. Amazingly, he succeeds wildly. Force Majeure is one of the funniest films of the year. It also sets a new high water mark for Scandinavian black comedy.

Ostensibly a relationship drama, Force Majeure follows a family over the course of a week's vacation at a luxury ski resort. Everything is going just fine until a controlled avalanche nearly crushes the family as they dine on a busy patio. While the danger proves completely unfounded, it is father Tomas's (Johannes Kuhnke) cowardly reaction to the event that colors the rest of the trip, forcing family and friends alike to question their notions of patriarchy in the most awkwardly hilarious ways.

Most of the narrative derives from the interactions between Tomas and his wife Ebba (Lisa Loven Kongsli), but some of the funniest moments involve a subplot of Tomas's visiting friend (Kristofer Hivju) and his much younger girlfriend. Their relationship is drawn into question by Tomas's actions as definitions of gender roles are continually turned on their heads, forcing the audience to confront their own perceptions of such concepts. There's no doubt that more than a few uncomfortable conversations are bound to take place on the car rides home between couples who spend a night at the movies watching Force Majeure.

Aside from the excellent acting across the board, Östlund's great success is his propensity to hold the shot long past when many filmmakers would cut away. He does this in his characters' most awkward moments, such as when Tomas breaks down in a blubbering mess, or when the guys are confronted with the romantic rejection from a stranger. This coupled with an impressive ability to inject random bizarre occurrences gives the film an overwhelming sense of real world poignancy that only adds to the humor.

It may be counterintuitive to think that a movie all about the most awkward moments of a relationship would be fun to watch. But this is the success of that witty Scandinavian black humor. It's awkward, it's biting, it's uncomfortable, and Force Majeure is undoubtedly one of the most enjoyable films of the year.