Review: LOVE IS STRANGE, A Modest And Delicate Tale 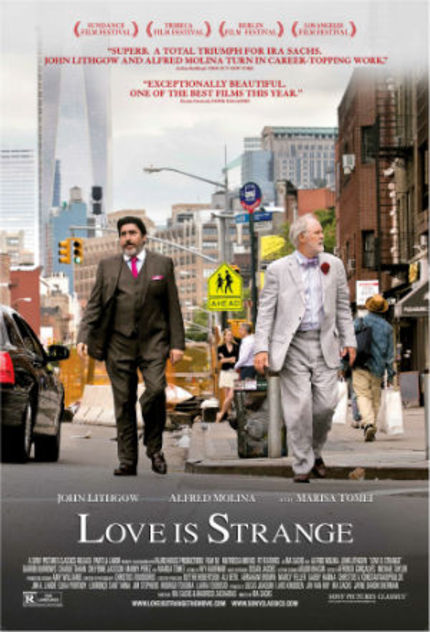 Before watching the latest movie by writer/director Ira Sachs, I realized that I'd never seen any of his previous work. After watching Love Is Strange, however, I resolved to see everything he's ever made.

My initial impression was that Love Is Strange was aping a classic. Indeed, the premise is remarkably similar to Make Way for Tomorrow, Leo McCarey's 1937 drama, which follows the travails of a longtime married couple who fall on hard times and must separate in order to live with their children. It's intended to be a temporary arrangement, but, as anyone who has ever dealt with aging parents can testify, it quickly becomes a hardship for the children.

Much the same fate befalls Ben (John Lithgow) and George (Alfred Molina), a longtime couple on the downslope of their lives who have been together, romantically and comfortably, for 39 years. When, as the movie begins, they are finally able to marry (legally), George is promptly informed that his longtime employment as a music teacher at a Catholic Church-affiliated school has been terminated. With Ben retired and receiving only a pension, they can no longer afford their Manhattan apartment, and so must separate until George can find another teaching position. Ben moves in with his nephew (Darren Burrows) and his family in Brooklyn, while George stays in Manhattan with two gay cops, his former downstairs neighbors.

As in Make Way for Tomorrow, neither Ben nor George fit well into their new surroundings, which are much busier and more bustling than their former home. They are not the type to complain, though, and both are gentle souls, so they settle in the best they can. Ben faces the greater challenges, since his nephew's wife (Marisa Tomei) is a professional writer who works at home, and the teenage son (Charlie Tahan) is, well, a typical teenage boy, prone to fits of anger and bursts of complaints. Meanwhile, George discovers that his new, young law-enforcement roommates (Cheyenne Jackson and Manny Perez) enjoy socializing -- loudly -- at home more than he ever realized, which leaves him .. with a headache.

Ben takes up painting again, while George gives private music lessons and searches, futilely, it seems, for some magic combination of employment and/or suitable New York City accommodations. They cannot imagine living elsewhere -- although that's certainly an option -- and so they pine away for each other, quietly longing for the day when they can get out from under their newly-reduced circumstances. 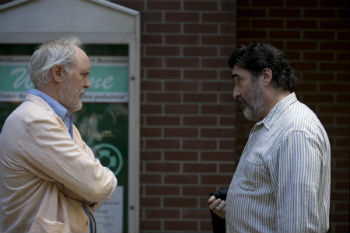 By this point of the movie, the echoes from Make Way for Tomorrow had become more distant. The screenplay by Sachs and Mauricio Zacharias -- the two co-wrote 2012's Keep the Lights On, which Sachs directed -- establishes Ben and George as melancholy yet personable characters, men who love each other deeply and who remain affectionate with one another. Theirs is a strong, true, and lasting love, the kind of romance that others can only dream about. They are not the sort of people to stand up and roar, but their feelings are plainly, readily apparent, humming and whirling and lusting just beneath the surface.

Lithgow and Molina tap into the deep emotions of their characters, resisting any temptation to make grand declarations or deliver eloquent soliloquies or even to make their distress readily apparent. Their performances fit perfectly into the visual and dramatic schemes designed and delivered by Ira Sachs, who has quietly told a story that is authentic, eloquent, and haunting, without ever resorting to melodrama.

By the time the final frames rolled, I was convinced that Love Is Strange is sneaky good, the kind of modest, delicate movie I never want to over-hype, yet will linger in my memory for a very long time.

See also an interview with the director during Sundance this year, conducted by Valentina I. Valentini for ScreenAnarchy. The film opens in New York and Los Angeles on Friday, August 22, before expanding across the U.S., via Sony Pictures Classics. Visit the official site for more information.

Do you feel this content is inappropriate or infringes upon your rights? Click here to report it, or see our DMCA policy.
Alfred MolinaIra SachsJohn LithgowMarisa Tomei

More about Love Is Strange