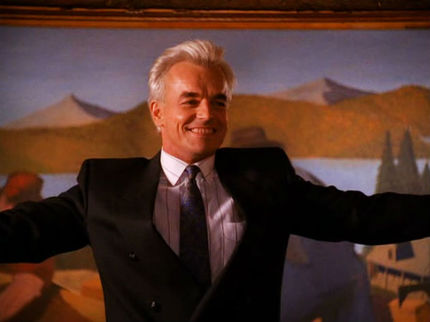 The annual Fan Expo returns to Toronto this weekend to offer cultists a rare glimpse of larger than life figures from favorite movies, TV shows, comic books and other emblems of pulp fiction. To many cult aficionados, in the land of the bizarre, there is nothing more coveted than David Lynch's Twin Peaks, which celebrates its 25th anniversary this year. To the delight of Peaks die-hards, the Fan Expo has truly outdone itself by bringing a few beloved characters to town for a panel reunion.

One such attendee is Ray Wise, who was blessed with the role of a lifetime in Leland Palmer. Few characters run the gambit of the emotional spectrum quite like Leland, and it's hard to fathom an actor who could've done it better than Wise, who approached the character with breathtaking chops and commitment.

I had the opportunity to speak with Ray Wise in anticipation of this weekend's exciting festivities. Wise graciously answered questions Twin Peaks devotees have been pondering for years, giving ScreenAnarchy a glimpse of the revelations fans can expect from the actors behind Leland Palmer, Audrey Horne, and the ever-enigmatic, Laura Palmer.

What was your introduction to the project?

I knew who David Lynch was and I appreciated his work and then I got a call from his casting director saying that David wanted to see me for a roll in a script that he did called Northwest Passage. So they sent the script to me and I read through it, went to a meeting with David - I thought I was going up for the role of sheriff Harry Truman, because I read it and I figured, 'well now, what would I play in this piece?' Sheriff Truman sort of stuck out to me... or maybe Ben Horne, but Truman more. And so I met with David and we didn't talk at all about Northwest Passage, which not too much later became Twin Peaks. We talked about our first cars in our lives and about an actor friend of ours that we had in common. We talked for about 20 minutes and that was the extent of the interview. Then I got a call a couple of days later saying David wanted me playing Leland Palmer.
I had to check back to the script and look through it again and see who Leland was and what he was doing. I saw that he hears his daughter has been killed, he cries and he identifies her body... and cries. Then he's up in her room when the sheriffs and deputies are searching her room and he cries and he's sad... And all this guy is doing is crying. And then I realized, 'well, therein lies the challenge in playing Leland Palmer - having to show varying degrees of grief; being able to differentiate between them and keep it interesting. So that was the challenge and I accepted it and went full out, never realizing how they were going to develop the character. Then the weeks went by and Leland got stranger and stranger and did things that very few people ever do... especially on television.

How did the distribution of scripts happen? Was it episode by episode? Week by week?

Yes, it was by episode and we didn't know what was going to happen from week to week until we got that week's script. So we were always shocked and amazed at what we were going to have to do that week. It was really exciting, thrilling, all those things. It was a great cast - we got along extremely well. And from the time of the pilot, we knew what the tone of the show was. We knew what it had to be and we kept it going from week to week.

When you read the script for the pilot, did you ever think that the show would go where it went?

No, of course not! We knew only that the pilot script was a good one. It was a special, special thing and if we did it well, it would be special... but we had no idea that it would catch on, especially not on network television... And that it would become the phenomenon that it became. And then, given the opportunity to do more, we were thrilled.
How did you feel when you read episode 14, when the killer was revealed? (Epic Spoiler Alert)

(Laughter) I was really downcast. It was very depressing to me. Number one, I didn't want my character to be the killer of his own daughter- I don't want to spoil it for anyone who hasn't seen it yet... I remember I was giving an interview in 1996 to a Russian television station (laughing) and I think I gave away the plot... I think I said something like, 'Oh, and of course, you know, Leland is the one who does it'... and then I realized what I had said. And I said, 'Um... or not.' Anyway, I didn't want to leave town. I didn't want to be the killer. I knew that if I was it, I would have to die or go to jail for life. In any case, I'd be leaving Twin Peaks and my family and I didn't want that.
David explained to me that my last episode was going to be a beautiful one and that I would die in Kyle MacLachlan's arms. He would recite the Tibetan Book of the Dead and I would look down that long tunnel with the bright light at the end and see my daughter... that her arms would reach out to me and that she would forgive me. So, he painted a very pretty picture for me and made it very palatable. And that last episode was very well done. Tim Hunter directed it. It was a great episode.

Given that it was such a phenomenon, what would you say was the typical reaction of fans bumping into you on the street - before and after they found out you were the killer?

Well, it was surprising that they didn't react in shock or horror. They reacted very warmly. In fact, I made a movie in Romania around 2001 or 2002 and I would leave the hotel just to cross the boulevard to go to a little grocery store and a restaurant, and as I would cross the street, cars would stop to offer Leland Palmer a ride. And I thought, 'Wow! Even in a country where the standards seem very low, everyone seems to have a television. So yeah, Twin Peaks was a big, big show in that country, and in about 70 other different countries too. Same thing - I would be walking down the streets of Madrid and people would stop to say hello to Leland. It's pretty amazing the impact that the show had worldwide.
When you got the script for Fire Walk With Me, what was your impression on the far darker foray into Twin Peaks?
I liked it because it was a motion picture. It wasn't network television. I mean, if it were done today it would be on HBO or Showtime right? I liked the idea that it was darker, that it was going to be 2 1/2 hours of pure expressive entertainment showing exactly how we arrived at that moment when the series began. And again, I thought it was very strange and wonderful... and well written. It wasn't very well accepted when it first came out, but I think over the years it's garnered and gathered momentum among fans and viewers. Me, personally, I think Fire Walk With Me is David's masterpiece.
How often do you revisit the show for personal entertainment?
Just about once a year. I marvel at it every time I watch it. I think, 'My god, look what we did then and how good it was and how special it was.'... Everybody that was on that show - all the directors that participated and the writers, what they wrote. It was just something almost from another planet. There hadn't been anything like it before on television and I don't think since. I think Twin Peaks broke ground for a lot of shows that came later. Even to this day. Television critics review shows and mention Twin Peaks in their reviews. I think it was such a cultural phenomenon and had such an impact... I'm just very proud to be a part of it.
Of all the direction given to you by Lynch throughout the series and film, was there a piece of direction that's especially resonated with you over the years?
(Laughter) Oh god, there's probably many moments, but I think the one that I remember the most is the scene where I'm in the living room of the Palmer house and I'm going to play a song on the phonograph. The music plays and I pick up my daughter Laura's graduation picture from the table there, and I start dancing around with it... and then I start crying and my wife comes in and wants to know what the hell is the matter with me. She tries to pull the picture out of my hand and we fight over the picture and it breaks over the coffee table. I actually did cut my hand on the glass of that picture... and smeared real blood on poor Laura's face.
But the thing that I remember about David is that he said, 'Ray, now just before we start the scene, I want you to pick up that needle of the phonograph and I want you to drop it right there in the middle of the song... and then let's go from there.' And I dropped it right in the middle of the song and it was all written on the page, but... that song just brought everything to life. And for me, it pretty much solidified in my mind the talent that David has - of just saying the right thing - and it's always a little thing. It just triggers everything and everything comes out of it and then something glorious happens. He has that ability. And he brings it out in actors. He's a very laid-back guy you know... He likes to keep it nice and even keel on the set... And he just knows and he so loves filmmaking. He's so enthused by his work... it was just a joy to go to work every day.
Do you have a favorite episode?
Well, my favorite episode is my last episode and the one leading into it perhaps. That reveal was it for me. That was my favorite. Of course, the episode where Leland kills Maddie was also pretty special in my mind.
Was there an episode that was the most fun to shoot?
It was the pilot up in the Pacific Northwest. And then of course doing Fire Walk With Me. Going back up there again and going over that same territory... it was just wonderful to get back up there again and just feel the woods... and that old train that we worked on... wow...
That must've been pretty creepy...
Yeah... It was...
Tweet Post Submit

Do you feel this content is inappropriate or infringes upon your rights? Click here to report it, or see our DMCA policy.
Fan ExpoRay WiseTwin Peaks