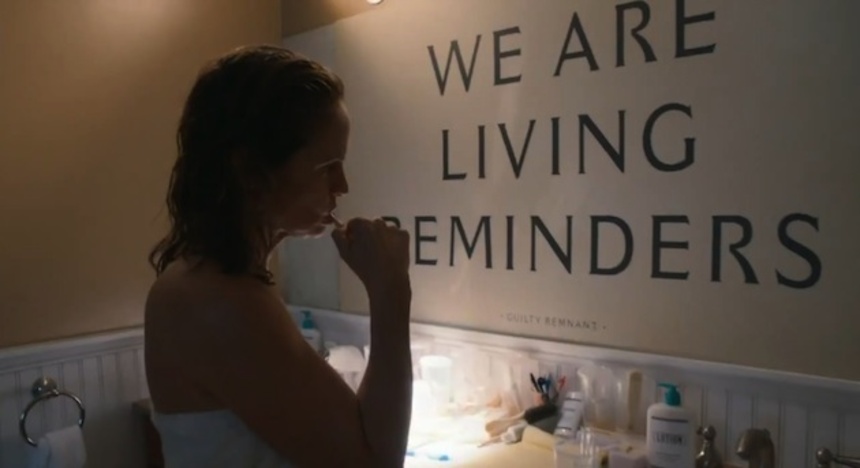 On the day of the Great Departure, Damon Lindelof cancelled his Twitter account in mid-sentence, as befits the content of his new series, The Leftovers. None of us even got a chance to say goodbye.

Nor were any of us, for a short while anyway, given a context for Lindelof's departure in order to make sense of what had happened, though eventually it became clear. In some ways Lindelof's twitterdammerung is a better thematic examination of grief in the face of unexpected loss than The Leftovers itself. We are, all of us, left over; and the world we are left with is, by the departed's absence, revealing itself to be a dire thing indeed.

I miss Damon Lindelof. I miss his voice. I miss those podcasts he used to do with Carlton Cuse after particularly significant episodes of LOST. Hey, I miss LOST. If you don't miss LOST, but are still a Lindelof hater four years later, then I'm going to have to agree with what I presume to be your prevailing beef: watching that show was clearly a colossal waste of your time.

The Leftovers has been described as a reaction on Lindelof's part to what happened to LOST. It certainly enters the world with more caution than LOST did. I'm fairly sure LOST never outright promised its audience that all mysteries would be explained and that all explanations provided would be satisfactory, but the audience took that presumptive promise as the series' table stakes anyway.

LOST was wired that way, building its entire audience relationship around the push-pull of weekly mysteries answered, and new mysteries revealed. To say that LOST didn't deserve what it got is inaccurate, even if most people are incorrect about why: LOST's fate in the popular consciousness had nothing to do with the ending, and everything to do with everything else.

The Leftovers, meanwhile, might as well have been released with a press release, for all intents and purposes, reading something along the lines of "we are not necessarily gonna tell you what the Great Departure was." It's a series built around a core mystery - why did 2% of the planet's population suddenly vanish three years ago? - but in which all and sundry are being transparent about the fact that the setup is just, well, the setup.

I've yet to find a character on The Leftovers that I find halfway as compelling as Jack, Kate, or Locke, but I appreciate the degree to which the series is resolute about its own table stakes: we are here to learn about Kevin, Laurie and Matt. The departed - who they were, where they went, and why they were taken - are not the point.

This charms me, because it means Damon Lindelof is indisputably the voice behind the series. As a writer, he will forever write about what he writes about. What Lindelof writes about and finds interesting seems to have an unswerving ability to piss an enormous number of people off, but like any true creator, he can't veer from the course even with all the road signs in the world.

I'm generally pro-DL. Only Star Trek Into Darkness lost me completely, and otherwise I find the King/Castaneda fusion in his prevailing preoccupations entertaining and interesting.

More than any of this, though, I simply miss the man, himself, as a voice in the popular culture discourse. This is what the last year took away from us, and I'm still not convinced the sphere of modern geek commentary has successfully recovered. Damon Lindelof might not have been the center of the geek universe online (I don't know, is that Wil Wheaton?), but he was a rare entity nevertheless: a content creator who was also one of content creation's most sophisticated commentators and critics.

Last summer, Lindelof took his unofficial online pop culture creation seminar to the 201 level in his interview with Vulture, where he broke down - in preternatural detail - what would happen to, say, the story of John Henry if it were being repurposed by Hollywood as a big-screen adventure.

The resulting commentary is such a razor-sharp portrait of how the modern motion picture industry works now - the answer, essentially, to questions like "why did Superman decimate Metropolis in Man of Steel?" or "Why do there need to be three Hobbit movies, anyway?" that it might well be one of the most important analyses of the business behind modern popular culture that has been written in the internet age.

That's the guy I miss. I know that Lindelof will truck around, doing interviews (and possibly even podcasts) about The Leftovers here and there; but his daily, public-access presence as a member of this community has been eradicated.

And why? Because "we," by which I mean "the internet at large," were satanically, almost indescribably, mean to him.

Were you? Was I? Probably not, but the bulbous mass of facelessness called the online world decided, hive-mind-like, to swarm Lindelof anyway. Lindelof has subsequently reported that the last episode of Breaking Bad - which saw a deluge of smug twitterers with evident personality disorders swamp Lindelof's twitter feed with retroactive scorn for the LOST finale based on their satisfaction with the Bad finale, as though excellence in concluding episodes of television is a zero-sum game - was what broke him.

(While we're here: having watched both in the last 24 hours for no particular reason, the Breaking Bad finale is a conceptually unambitious, predictable piece of storytelling pap that adds absolutely nothing to the overall thematic arc of its own excellent series, besides the answer to "is Walt actually gonna die or not." The LOST finale is an overlong, visually unambitious grand finale that nonetheless takes huge conceptual and emotional chances with its characters, themes, and audience. Next time you feel like complaining about the "sameness" of most mainstream entertainment, don't.)

It's a classic example of cutting off one's nose to spite one's face. When "we," officially or unofficially, voted Lindelof off the island, we lost our representative in the parliament of rooks called the internet, like a bunch of Tea Partiers with no functional understanding of what a world without government would look like. Based on the way online discourse has broken down into team-based slapfights and unadulterated idiocy since social media became "a thing," I'd argue that we need him back, now more than ever.

(Last week's best example: in spite of apparently being able to recognize Neil deGrasse Tyson on sight, none of these junior Cumberbatches were erudite enough to sleuth out that a tweet from a man who calls himself "dogboner" might, just might, be representative of a phenomenon that Mr. Spock once called "a joke.")

We need to do better than this, and we need people like Lindelof in order to do it. The people who attacked Lindelof so religiously that they forced him out of the game can't be the teeming mass that wins; it's not just a bad on them, it's a bad on all of us for fostering an environment that includes them, and their intellectual (and anti-intellectual) bullying, in the first place.

Come back, Damon Lindelof. Not so that Twitter can have its whipping-boy back, but so the rest of us can see that it's possible to change the narrative. Do you need me to say "the island needs you?" Fine. The island needs you.