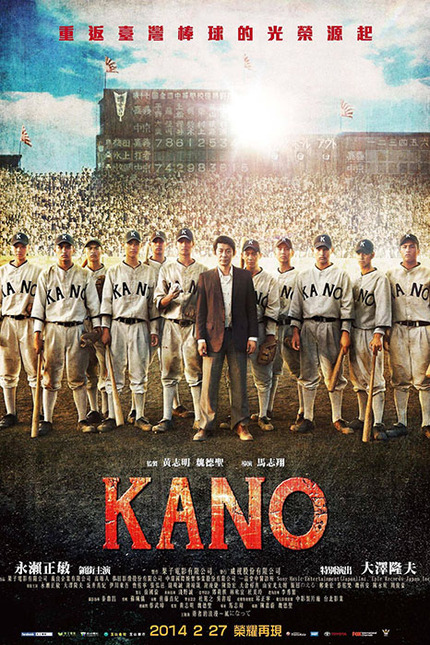 Baseball has been used many times in cinema to tell tales of triumph and tragedy.  The New York Asian Film Festival brings us Kano, the true story of how the sport brought together three very separate racial groups in 1930s Japanese-occupied Taiwan. Here's our chat with the director, Umin Boya.

The Lady Miz Diva:  Many people coming to the festival will know you from SEEDIQ BALE, and that you had acted for a long time.  What made now the right time for you to director your first feature?

Umin Boya:  Actually, I have been a director for about seven or eight years now, but I usually work in TV movies.  This is my first feature film.  It's because of Wei Te-Sheng, the director of Seediq Bale.  Actually, what really made me want to go into directing over the years was because I was concerned about aboriginal social issues in Taiwan.  I wanted to tell stories about my people.

The look and scope of KANO does not seem like the work of a first time feature maker.  It's very epic and feels very classic Hollywood.  What were the influences in your mind when you were creating it?

UB:  I think the director has the idea and vision for film, but it's only the film crew and the technicians that can make it real; to come alive as a film.  It really requires a film crew that is selfless and professional.  I told everyone on the set on the first day, "This is my work, but it is also your work, and your work, and your work. It is everybody's work, including the stars."
Also, it's related to the topic, the theme of the film and how many people believed in it that made it interesting and something that we had to collaborate on together.

Knowing there are many great films that have baseball as a backdrop, how did you think about making this movie stand out with regard to the way you featured the baseball aspect to keep it lively and entertaining?

UB:  Actually, I have seen many films on baseball, about baseball, but how KANO is different is that it is really a baseball film, so baseball is at the center of the film.  The kids grew as they were going through training and competing in games and everything is about the spirit of baseball.

What I really wanted to do, putting it in a simple way, was I wanted to tell a story and I want to tell it well.  Of course I have thought about the questions that you asked and it has crossed my mind, but the story of KANO has no example; when I was thinking about how to bring the story to the audience, the shots, the sequences just came to my mind.  And also the fact that what I was going for was different from other films because I really wanted the audience to experience the game as if they were in a baseball stadium, and that has never been shown before.  So, basically I just wanted to tell a story that is already very well, I wanted to tell it well.

The underlying theme of KANO is the joining together of the three race groups - the Japanese who had ownership of Taiwan at the time, the Han Chinese and the aboriginal Taiwanese - around the sport of baseball.  What made you explore that subject as your first feature film?

UB:  Actually, when I was growing up, when I was younger, I actually experienced many racial discriminations.  Gradually, it led me to have some kind of complexes and I tried to run away from my identity.  KANO was very special because the event takes place at a time when racial discrimination was severe in Taiwan.  There were racial classes in Taiwan; the aborigines and the Hans were constantly third class people because they couldn't speak Japanese well.  But under the leadership of the coach, Kondo, it was actually a team without racial discrimination, and that was very special to me, because what Kondo was saying was, "I choose talent, not race. As long as you can hit a home run, as long as you can catch the ball, you are a hero to me."  So the racial issues that I put in the film were actually from my own experiences, and I tried to make adjustments because what actually happened in the team was that the players didn't experience much racial discrimination; they were working together so much as a team.

I interviewed Kang Je-gyu, the director of the Korean film, MY WAY, which told of the true friendship between a Korean and a Japanese during the Japanese occupation of Korea in WWII.  That film was very coldly received in Korea and the director thought that perhaps it wasn't time to see Japanese as any other way than villains or occupiers.  Yet KANO has a similar theme and has been very well received and the message seems to be embraced.

UB:  Korea and Taiwan were both occupied by the Japanese, but for different reasons: Korea was invaded by Japan, but Taiwan was given away as a colony by China.  So Taiwan felt more like deserted by China.  Although there are many issues in relation to this kind of Japanese colonisation, Taiwan was more like changing a foster family from China to Japan, and it has a different impact on the people in Taiwan.  During the 50 years of colonisation, I think the feelings or emotions of people have towards the Japanese colonial government - it should be explained in multiple angles, not just one.

How did you balance the pacing between character development and the baseball scenes? I wondered if there was meant to be more scenes of the players individually?

UB:  Yes.  So because the characters are based on real people in history and each of them has their own story to tell and they were really interesting stories, we wrote the script and we actually shot them, but when it was time for editing, we decided that we had to maintain some kind of focus on the film, so we had to sacrifice some of the plots.  But it's on DVD and it will be in segments.

Can you talk about having Wei Te-Sheng, who directed you in SEEDIQ BALE, as your writer and producer? What kind of guidance did he give you?

UB:  So, actually, many people have helped me throughout my career and Wei Te-Sheng is definitely one of them, my latest one.  Actually, when I decided to shoot Seediq Bale, it was because I wanted to learn how to make a big budget film.  In that experience, I learned a lot, but KANO is even more because I'm really happy to have Wei as my producer because he himself is a director; so I can talk with him about creativity, about technical parts of the film and he will definitely tell you everything selflessly.  He's definitely one of the greatest helps I've ever had, and I not only respect him but he's also a very funny person.

I'm curious about Go, the pitcher in the film.  A lot of the drama in the last act centers around his injured finger which will not stop bleeding.  He refuses to leave the game, screaming in pain with every throw.  I'm sitting there wondering why doesn't somebody get him a Band-Aid or stitches?

UB:  Because it was against the rules.  So, in official documents, or in the news press at that time, no one knows that it was because he was injured, but actually it was told to us by Su, the hitter.  He was the center at that time, and he was the furthest from him, but he saw everyone and he knew he {Go} was injured because every time he made a throw, he cried out.  It was very difficult for him.  The teammates knew that he was injured.

What is next for you?

UB:  I'm in the process of writing a script for another project that I want to shoot, but in between I will probably take on small projects as a director to make a living, but basically this script that I'm envisioning right now is also about Taiwan's history.


This interview is cross-posted on my own site, The Diva Review. Please enjoy additional content, including exclusive photos from the festival there.