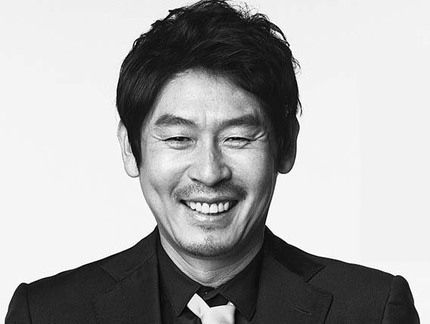 The New York Asian Film Festival gave their Star Asia award to an actor whose work has ranged from the provocative - Oasis, Peppermint Candy - to the popular - Silmido, Haeundae and the Public Enemy series. Sol Kyung-gu makes his first trip to New York to introduce the surveillance thriller, COLD EYES, and the devastating story of a family overcoming a brutal violation in HOPE.


The Lady Miz Diva:  How did you come to the film, HOPE?

Sol Kyung-gu:  That script has been around for a few years.  Actually, another director was attached to the film at one point.  They even had the casting done for the child actress, but it wasn't moving forward.  Then Lotte {Entertainment} came in and everything changed: They scouted the director Lee Joon-ik and then I was brought back and the child actor was recast and then everything started clicking together.   I think everything started moving smoothly because of everyone's faith in the director.

Can you please talk about the direction of Lee Joon-ik? Did he have a definite structure for how you would play the role?

With such an emotionally-charged role, were you able to leave that character on the set at the end of the day?

SK-g:  Depending on who's at the helm of the set; the vibe on the set is different.  For example, Lee Chang-dong, the director of Oasis and Peppermint Candy, there is a lot of pressure on the set.  But Director Lee Joon-ik can't stand that because he's a very light director.  He was also concerned about the child actress {Lee Re}; because of her presence, he didn't want a set that is full of tension and pressure.  So when you watch the movie, you would think that the set was also very grim, but in reality, it wasn't so; it was very lighthearted.  The movie is the movie, but on the set it was a totally different reality.

During the early scenes, the father's reaction is interesting because it's such a slow build, until you see that finally he has to deal with reality.  Was that slow progression something you worked on yourself or Director Lee's idea?

SK-g:  With every movie, there is a process of sharing ideas so you come closer and closer to a common point, but I would say we didn't have that much difference of opinion.  We also shot in order.  It wasn't the type of movie that required a lot of calculations since the scenes were in order, so you could just feel the emotions.  So I think because we shot in the order of the script, it was easier.

Was COLD EYES shot near the time of HOPE?

SK-g:  It was right before the shooting of HOPE.

How do you switch gears between playing this acerbic, almost humorous character in COLD EYES and playing this wrenching, emotional role in HOPE?

SK-g:  Well, they are just very different characters the way they're written.

Do you need that when you know you're going to play something very heavy; taking a project that has an opposite feel?

I admire Korean actors' ability to disappear into the characters and you are one of those that does it amazingly. Is that your goal as an actor to be invisible and only let the character show through?

SK-g:  I don't think of myself as disappearing into the role. That would be nice, but I'm always there. {Laughs}

You are known for gaining or losing weight to better play a particular role. Do you build your characters from the inside out; do you have to live with them, or are you able to just read the script and keep it on the surface?

SK-g:  I think before, I did that.  Like I would walk around in my costume.  But it's very difficult and it's difficult for the people around me.  So I try my best not to lose myself.

You studied film and you've done theater and you're known as one of Korea's greatest actors; have you ever wanted to work behind the camera?

SK-g:  Actually, when I first went to university, I wanted to be a director because I didn't have the personality to be an actor.  I didn't think I had ever showed any kind of inclination.  But from an actor's point of view, just watching directors at work - especially Korean directors, who basically have to be there at every stage of every decision that's made - and it seems like extremely challenging work.  So I decided it's not for everybody.  Let me just stick to acting.