Fantasia 2014 Review: THE RECONSTRUCTION OF WILLIAM ZERO Has An Identity Crisis 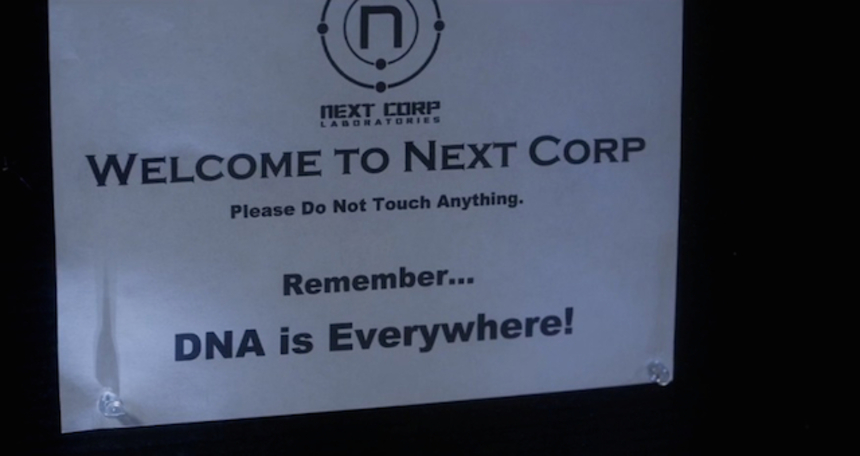 There seems to be some kind of movement out there where low-key indie dramas of personal tragedy cloak themselves in the veneer of heady science fiction concepts: films like Mike Cahill's Another Earth, James Byrkit Ward's Coherence, and what is perhaps the sub genre's peak, Lars von Trier's Melancholia. Spaceships, laser guns and time portals are replaced with hand-wringing, self-doubt and self-destruction; and plenty of metaphor.
William Blake and his wife Jules are a seemingly normal, over-worked, slightly distracted parents.  As The Reconstruction of William Zero opening moments unfold, he is distractedly scrambling to get to work, she is busy in the kitchen preparing a breakfast that nobody seems to want, and their son Kevin is itching to get out and enjoy the sunshine on his bicycle. This typical morning suburban multitasking chaos quickly culminates into the films principle source of pain - the loss of a child at the hands of a parent in a moment of negligence.  It smashes the surviving couple into oblivion along any sense of Blake's identity or existence.
I am not sure how much I accept Blake's motivations for what happens next, but the writers Dan Bush (who also directs) and Conal Byrne (who also stars) want to ask us a few questions under the guise of twisty plot reveals. I think the film narrative moves a little to fast for its own good, as there is a lot of running around, and a little too much patching-over with exposition. Byrne conveys plenty with his tricky performance as Blake and his twins. And the film is rich enough on screen in visual detail, that much of the 'explaining' to the audience feels redundant.  So bear with me.
Question number 1, is more bigger picture speculation: If Frankenstein's monster were to create his own Monster, what set of values and confusion would go along with that? Treading as lightly as possible around spoilers, you get a lot of sides of William Blake; and I'm sure naming your lead character after the 18th century romantic poet, who has been a strong influence on twentieth century giants from Carl Jung to Philip K. Dick is no co-incidence. The films most winning image involves four Blake's sitting in a diagonal line along a beach. Magnificent. For much of the film, as Blake is fighting his internal struggles quite externally, the film is not lacking for craft, but feels like somewhat empty calories in its story beats. The question "Are You OK?" is posed so often by his colleagues down at the cloning laboratory (yea, you heard that right, make of it what you will) that it becomes kind of the mantra of the movie. There are no police or psychiatrists or even other family members in this movie, making the world feel too tiny, and actions of too little consequence.
Question number two being asked by film: If parents want their children to be the better version of themselves (as a parent myself, this strikes me as a general enough truism) how far do should they be willing to go to fix themselves? Again, at the risk of sounding opaque in terms of spoiling things, the film looks at offspring in a variety of ways, as metaphorical and literal extensions of William. Can new children, by proxy, heal (or in the parlance of the title, reconstruct) the parent? It is a difficult goal to obtain personal and familial happiness,under the best of circumstances, let alone how convoluted things get here.  And any such thoughts about the end game quickly become overwhelmed by its trigger-happy genre-inflected execution.
Perhaps most egregious is any character or agency involving Amy Seimetz's Jules is thrown under the bus. Consider the Seimetz's towering performance and arc in Shane Carruth's Upstream Color, why the screenplay had little to no use for here here as anything other than a grieving trophy (or worse in need of rescue by, ahem, the reconstruction of her husband) is beyond my ken. The film puts the motion of drama as its focus, but is often too quick to abandon it for a chase or escape or a murder.
There are big several reveals, facets in a puzzle-box, in the film, it is more about the personal tragedy of a human being dealing with a lot of self-inflicted pain. I believe the filmmakers are trying to do that Another Earth kind of 'whoa' ending, so someone fill in the blanks for me.  Is the final shot a flashback (without the usual 16mm visual filter, often employed during the film) or, as I suspect, a too-convenient solution that defies all the logic of these characters. It's open enough to invite multiple reads, but have to confess, I found The Reconstruction of William Zero as a whole to be more vexing than cathartic.
Sign-In to Vote
Tweet 0 Submit

Do you feel this content is inappropriate or infringes upon your rights? Click here to report it, or see our DMCA policy.
Dan BushConal ByrneAmy SeimetzScott PoythressLake RobertsDramaSci-FiThriller

More about The Reconstruction of William Zero

--SPOILER--
My interpretation of the ending: the '15 months later' clearly rules the flashback out for me. If this is not a flashback how could they possibly have a 6 years old kid 15 months later? Well this is not a sci-fi movie for nothing: it's a clone. Remember when Jules said she kept locks of the kid's hair around her neck? yep, DNA baby. And right before the end, they're in bed holding a heart shaped pendant (with said hair I suppose). Makes sense to me.

...the ending was completely clear to me (and most other viewers, it seems); And the simple fact that the reviewer mistakenly refers to the co-writer AND Director as "Dan Marsh" as opposed to "Dan Bush" - (who's name appears several times in both the opening & closing credits) implies to me that the reviewer simply wasn't paying attention, and therefore clearly missed many of the not-so-subtle nuances of the film.
Personally, I enjoyed it...

***Spoilers***Yes, my thoughts on that as well! But logistically, that would difficult if not impossible considering the actions of William1 availability of chemicals equipment and facilities. It was certainly foreshadowed, but seemed facile to get there so easily in a denouement

Agreed. it's quite interesting though; even after his clone went berserk (pretty badly by the way) no lesson was learned and William keeps on living in the past, escaping reality. sigh...Human nature...