I know magic when I see it, when I feel it, when I hear it. John Carney's marvelously understated, dexterously graceful Begin Again contains at least three sequences that are absolutely, unexpectedly magical.

Frankly, after a single viewing, I'm not prepared to dissect those scenes in detail, and doing so would constitute unfair spoilers, anyway, and I won't do that. Suffice it to say that, like every other scene in Carney's new feature, a spiritual sequel of sorts to his outstanding drama Once (2006), the magic is conjured up by acts of musical purity.

That's not to say I was transported, necessarily, by the music itself, a scruffy amalgam of folk guitar, tremulous voice(s), and pinpoint backing musicians. Rather, it's that Carney has captured apparently spontaneous moments of unbridled joy shared between musicians in performance, as they react to one another, express their emotions nakedly and without pretense, and achieve a secular nirvana, if only for milliseconds of time.

Most movie musicals are stories set to music; the songs are meant to illuminate the characters and provide entertaining interludes between dramatic or comic sequences. In a very few movies, it's the music itself that has formed the essence of the characters. Right off hand, I think of Martin Scorsese's The Last Waltz, a documentary, to be sure, but one that provided glimpses into the souls of the musicians on stage, as they played their instruments, signaled to each other without words, and communicated entirely through their music.

And so it is in Begin Again, which changes chords without warning because it knows instinctively that it will sound better that way. The story begins with reluctant, disconsolate Keira Knightley singing her own song to an inattentive nightclub audience. And no wonder: she has no stage presence, her voice is tentative and wanders out of tune, and the song itself has no discernible vibe.

Yet there stands the exceedingly gruffy Mark Ruffalo, mere feet away, bopping along to a song that surely must be playing only in his own mentally-defective and/or alcohol-addled brain. And he is smiling, and he rushes over to her. 'I want to make records with you!' he blurts out. Judging by her reaction, he might as well be saying, 'I am a homeless man and I want to make babies with you.' 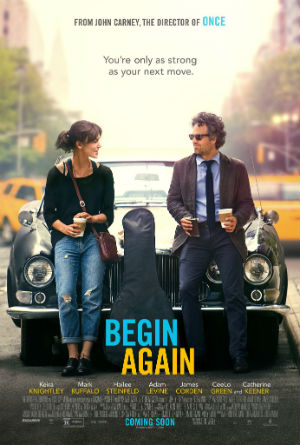 How each of them arrived at that point is gradually revealed, and then the story hurtles forward. This, by the way, is not the graceful part of the film; it's awkward and somewhat disjointed and very, very raw. Then gears begin clicking into place and the engine turns over and the motor begins to purr.

At one point, someone says something like, 'Music shouldn't be about image and visuals. It should be about authenticity,' and the response is, basically, well, maybe; there are a few who've done that, sure, but mostly it's about getting people to hear your songs. And that's what Begin Again is about: getting people to listen to songs and embrace emotions in a completely non-traditional and utterly entrancing fashion.

The cast certainly helps: Knightley and Ruffalo dance around each other, buzzing with kinetic energy, exuding a friendly chemistry with the promise of something more. Adam Levine contributes a very respectable turn as someone important in Knightley's life, and Hailee Steinfeld and Catherine Keener supply warmth and feeling as people who are important in Ruffalo's life, not to forget James Corden as a street musician / Knightley's buddy, Mos Def as Ruffalo's business-savvy partner, plus Cee Lo Green and a host of musicians as, well, musicians.

The leader of this band, though, is John Carney, who demonstrated with Once that he could do exceptional work with a duo, and now proves with Begin Again that he can pull surprises out of New York City street settings, solo acts, duets, trios, quartets, sextets, octets, and so on. The film freely acknowledges certain inauthentic conventions in a street-smart manner: 'Yes, we know you've seen and/or heard this before, but we've freshened it up and/or turned it upside down, and, anyway, we like it so it's going in the movie.'

Begin Again reinvents the movie musical as a device to define and explore individuals, solely through the music they love and the way they play it and produce it. Really, it's the opposite of a disappearing act; it impresses itself on the mind and captures the heart, without revealing how it was done.

The film debuted at the Toronto International Film Festival in September 2013 under the title Can A Song Save Your Life?. It opens in select theaters in the U.S. on Friday, June 27, before rolling out across the country in the following weeks. Visit the official site for more information..

Do you feel this content is inappropriate or infringes upon your rights? Click here to report it, or see our DMCA policy.
Adam LevineCatherine KeenerHailee SteinfeldJohn CarneyKeira KnightleyMark Ruffalo