PREDATOR: Shane Black Attached To Another Attempt At Reviving The Franchise 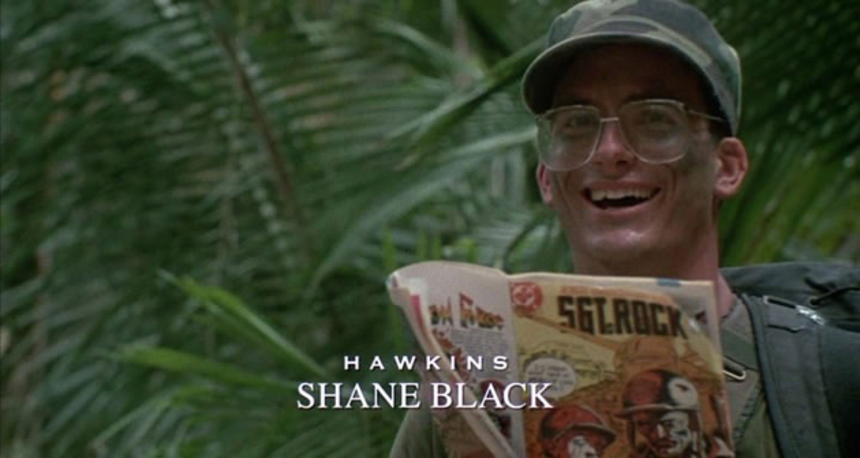 You know, I read this announcement from THR today about another Predator reboot and my mind immediately went to that scene in Austin Powers: The Spy Who Shagged Me where he says, 'Why won't you die?!?'. Hollywood simply has not had it's fill of the alien game hunter. So they are at it again.
This time around, Shane Black, the director of Iron Man 3 and writer of Lethal Weapon (the franchise was kind of a bid deal in the late 80s and early 90s) is attached to the reboot. This is also the same guy who wrote The Last Action Hero (not so much of a big deal in the early 90s). You will note from the picture above that Black has a connection with the franchise already. It goes all the way back to the first film when he was given a small role in it.
The only other way this is at all interesting is that after Black writes the first treatment for the reboot he is going to hand it over to Fred Dekker! Dekker has a place in our hearts because he wrote and directed Night of the Creeps and The Monster Squad.
So a couple of guys who were big in the 80s and early 90s are going to have a go at a film that was big in the 80s. Will this old guard of action cinema inject new life into this flailing franchise?
Sign-In to Vote
Tweet 0 Submit

"The only other way this is at all interesting..."
"Will this old guard of action cinema inject new life into this flailing franchise?"

This is the guy who wrote Lethal Weapon, The Last Boy Scout, and wrote/directed Kiss Kiss, Bang Bang, so I'm fairly sure this is going to rule. Plus, the Monster Squad reunion is welcome and I thought Black did a damn good job with Iron Man 3. I got exactly what I wanted out of that one and Black being at the helm of this one has me excited.

I hope they bring back Arnie. A grizzled Dutch (and a grizzled Conan) is, to me, much more interesting than a grizzled T-800 (though I'm happy about that too) or a grizzled Julius Benedict.

People with little imagination and no vision do movie reboot, i'll never pay to see one.

Well the good news is its not a reboot but a sequel.