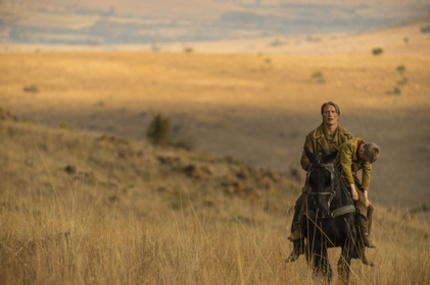 Kristian Levring's new feature film The Salvation is headed to Cannes shortly in the Out of Competition section, as part of the Midnight screenings. That last bit suggests there's going to be a fair amount of violence and bloodshed, which is more than hinted at in the first trailer. It looks quite firmly inspired by the spaghetti westerns that European filmmakers have a knack for.

Mads Mikkelsen plays John, a former soldier and immigrant from Scandinavia who has come to the American West in search of a new life for him, his wife and child. But when he kills the man who killed his family, it raises the anger and revenge of the murderer's brother Delarue (Jeffrey Dean Morgan). When John seeks the help of locals, he instead finds that in their cowardice they would rather hand him over to Delarue, and so John must become violent himself in order to survive.

Levring's earlier films The King is Alive and The Intended both focus on people in isolated places under psychological stress that causes strange and often extreme changes in personality, so The Salvation seems to be keeping in the director's thematic framework. The trailer makes it look a little stereotypically Hollywood, so I'm hoping this is not the case with the entire film. But what's not love about Mikkelsen and Eva Green battling the bad guys on the American frontier?