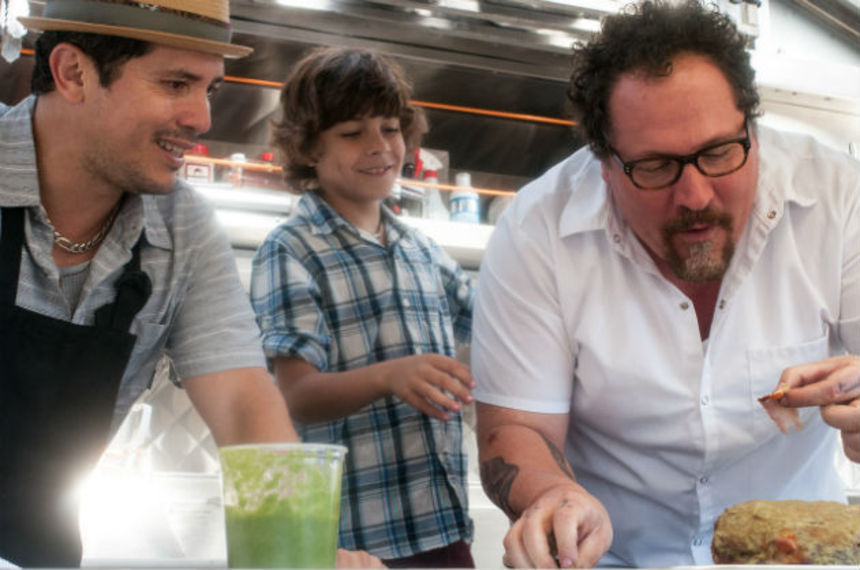 I've been waiting 15 years to give Jon Favreau the glowing review he's earned in spades with his return-to-roots film Chef. He has no doubt had a very interesting career since his initial indie splash Swingers back in 1996, but in many unfortunate ways, everything he's done since has somewhat existed in that film's shadow.

After the double-edged success of Swingers, Favreau was faced with the stultifying task of delivering on the expectations of his vast promise. And so he reunited two years later with bromance compadre Vince Vaughn, as the pair attempted to reignite their beloved chemistry with Made, a buddy mob-com that saw a far more annoying Vaughn than the charismatic playboy that won Indie hearts in '96.

Perhaps it was in the wake of the Made disappointment that Favreau opted for the far more traditional Hollywood trajectory, accepting generic acting gigs and translating his writing and directing talents into the world of large budget, please-all blockbusters like Elf and Iron Man. By no means am I putting these movies down; as far as blockbusters go, they really don't get much better than these contributions. Nevertheless, with blunders like Cowboys And Aliens, there was a sense of betrayal amidst the indie community that a filmic voice had been corrupted by 'movies'. I opt to provide this brief history not to rehash my decade-old disappointments, but rather because these feelings are precisely the subject of his return-to-roots film, which plays like an emotional map of the ups and downs of his entire career.

In Chef, Favreau plays Carl Casper, a former culinary visionary whose overnight success results in familiar 'expectations' and the pressure of maintaining golden boy status. In other words, his reputation precedes him. The conflict begins at the film's onset, when Casper prepares a new visionary menu for an important review by a trend-setting food-critic (played flawlessly by Oliver Platt), who was also an early champion of Casper's initial culinary voice. 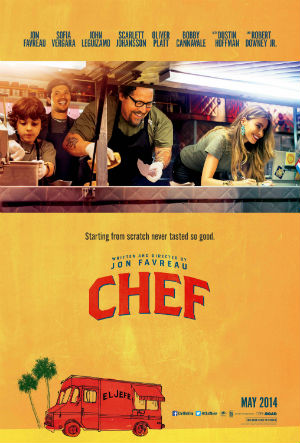 Though Casper is preparing a doozy of originality for the occasion that is sure to knock socks off, a fork is thrown on the road when the restaurant manager (Dustin Hoffman), i.e. the guy signing the cheques, insists that if The Rolling Stones came to town and didn't play "Satisfaction," the result would be havoc. Under this pressure, Casper caves and serves a dated meal that results in a career-killing review and a dignity-damaging Twitter battle. To hear Casper read his negative review aloud to his kitchen of faithfuls -- an endearing crew led by John Leguizamo -- feels like Favreau pulling from a personal history of slander that still resonates after all this time. To quote a line from the review: "Chef Casper seems 'eager to please'".

The event leaves Casper in a rock-bottom state that forces him to revisit his motivation for producing artistic cuisine in the first place and reevaluate what type of mark he wants to leave as a culinary artist. And so begins his transition from the world of mass-audience fine dining to serving real food to everyday Joes, in the form of an indie start-up food truck.

The audience may be smaller, but the career downsize also allows him the creative freedom to take chances, rediscovering his bliss in the process, and thus becoming more meaningful to a core fan base who connect to his work, rather than to an ambiguously broad scope. It also doesn't hurt that the journey will force the renowned genius to pay a little less attention to his vanity and spend more time with his neglected son, played by 10-year old Emjay Anthony, in a pitch-perfect breakout performance.

Like Chef Casper, in making a smaller scale work, Favreau has certainly done justice to his 15+ year old potential. And I must say, to see the writer of Swingers revisit the circumstances that produced his most inspired work, dealing with the very subject in the process, and in such skillfully intimate detail, is enough to bring tears to the eyes.

But all allegory aside, when the film's food truck adventure finally gets underway in its second half, Chef transforms into an utterly heartwarming father and son road movie that proves 'heartwarming' doesn't have to be such an ugly phrase. After all, life is presumably about far more than indie credibility vs eager-to-please blockbusting, and at the heart of Chef is a genuine story of an artist learning to overcome an ego and become a father.

Review originally published in slightly different form during SXSW in March 2014. The film opens in select U.S. theaters on Friday, May 9, before expanding in the coming weeks. Visit the official site for more information.