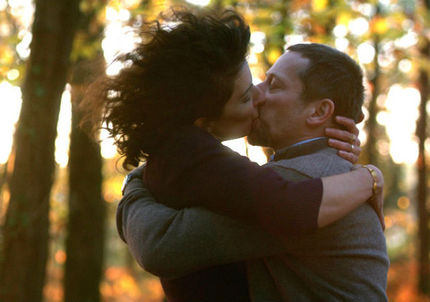 While most film audiences outside France will recognize Mathieu Amalric as the villain from Quantum of Solace, he's been directing films in addition to his great acting work for more than twenty years in his native country. HIs last feature, On Tour, about American burlesque dancers in France, won him a directing award at Cannes a few years ago.
With his latest, The Blue Room, Amalric has created a wonderfully surreal yet subtle noir thriller, the kind that, while not necessarily surprising in content (it's based on the book by Georges Simenon), is strange enough in execution to keep the audience's interest and attention.
Julien (Amalric) had been having an extramarital affair with Esther (Stéphanie Cléau), who is also married; he is recounting their story to a magistrate, in regards to a crime that is slowly revealed over the course of the film. While passionate, and there is discussion of being together permanently, Julien eventually ends the affair, and Esther (whose husband has died under mysterious circumstances) is not so happy about that. The remainder of the film moves between the recounting of the affair to the current situation, as the despicable crime is slowly revealed, but who the guilty party is, left open for debate.
The first and last thirds of the film are definitely taking cues from Alain Resnais' Last Year in Marienbad, though perhaps with less obscurity. Voice-over dialogue narrates images of the titular room, with sweaty, sated bodies mingling in the heat; these are Julien's memories, which shift between Esther's figure, the window, the wallpaper. At times, it feels a little overdramatic; or at least, the score is, especially at the beginning, when we have yet to know why we should be so immediately emotionally engaged. As I said, the story is somewhat predictable, but it is engaging and pretty sexy. The middle section becomes a bit more expositional, though no less interesting.

Once Amalric gets into a rhythm, though, the films works very well. He has grown quite confidently into the director's role. He co-wrote the screenplay with his co-star Cléau (also his partner); as actors, they understand that, with a story such as this, the actors are as much a part of the mise-en-scene as they are meant to stand out from it. No role is thrown away, as even the supporting characters become affected by the lovers' toxic relationship. The use of academy ratio increases the sense of entrapment; it is as if the characters sense the edge of the screen that they can't go beyond, forcing them to face the consequences of their actions. Julien's and Esther's attempts to keep their passion contained within the walls of their room, instead is pushed along with them within the screen.

Cinematographer Christophe Beaucarne deserves much of the credit here, matching Amalric's surreal, mosaic concept with amazing lighting and attention to details that the audience pieces together. And there is a much darker intimate violence to the film than one normally finds in neo-noir; in one scene, Julien repeatedly dunks his wife Delphine under water when they are swimming. It's clear that Delphine knows about the affair, though says nothing, and Julien cannot stand her stoicism.

Amalric has crafted a fascinating and engaging film, more for atmosphere and construction than content perhaps, but it can certainly stand in the grand French tradition of stories of crime and passion. But I don't think the content is the point; it's not about the what, but the how, and how memories are constructed and remembered after the passion is gone, and all that's left is the pain.
Tweet Post Submit

Do you feel this content is inappropriate or infringes upon your rights? Click here to report it, or see our DMCA policy.
Cannes 2014Léa DruckerMathieu AmalricStéphanie CléauThe Blue Room

More about The Blue Room