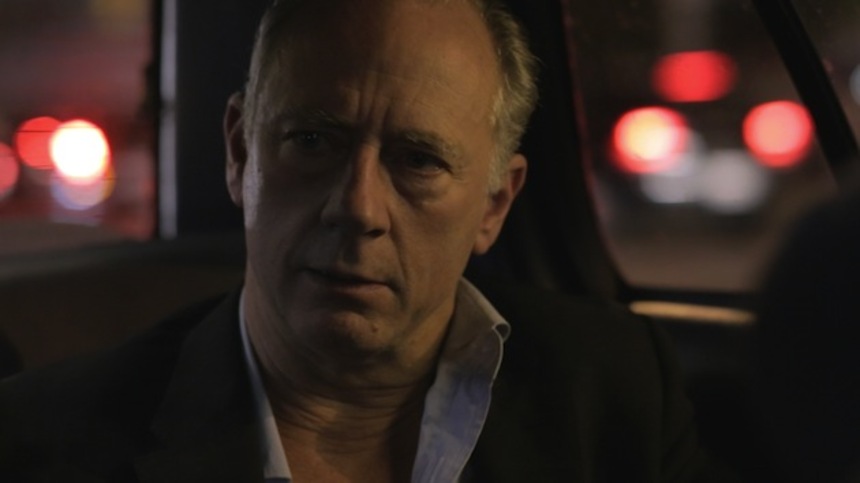 Picture it: The gun in the lap of a beautiful dame. A once powerful man hounded by the shadows of his triumphs. The cabbie with a kind heart and worn eyes. A fresh start. That last trick. The final score. And then there's the city; that never ending sprawl, a throbbing vein of head lights and stop lights, boney roadways to nowhere, and nothing... Los Angeles: The ultimate Femme Fatale. Steve Anderson's third feature, This Last Lonely Place, for lack of better phrasing, colorizes classic noir and pulp tropes, bringing them into a time when economic woes, low American morale and a potent melancholy and paranoia rule the day. In other words, desperation itself has rarely felt so desperate.

Stoic Sam Taylor (Rhys Coiro), hawk-eyed cabbie and ex-army officer, preps his cab for one last night on the job. He fiddles with the fussy engine, the final brilliant rays of the day spreading across the pacific coastline behind him. Night falls, and even on the twinkling streets of Santa Monica and Beverly Hills something feels dark and dank. Sam's yellow cab slinks in and out of shadow, as if tracing the vile undercurrent of the city, making a note of every shady corner, every deviled face. Sam, in his own way, is a chronicler of a Los Angeles many of us only know in, well... the movies.

Sam picks up Frank (Xander Berkeley), an the older man, slick in a suit, if a little disheveled, who offers to buy out the cab for the night. He unfolds bill after bill, hands the crisp, robust roll to Sam, who begins to protest, and then Frank is on his cell phone, furious, frustrated... scared. The pair just drive. The tension building in the cab is dense, perfectly ripe... something bad will happen. Spurred on by alcohol, Frank begins to unravel, detailing how his world is crashing in on him, unless... unless tonight he and Faye (Carly Pope) can make a clean getaway. Faye, a mourner forever remembering every heart she's aimed to break, is picked up at where else but the Chateau Marmont.

And so This Last Lonely Place has stacked its deck, built its house, and is methodically, suite by suite, knocking it all down.

You can bet your tattered fedora that personal vendettas, twists, schemes and agendas lead to some pitch dark paths. Nothing but nothing is a coincidence here. And while not all elements lock into place, namely the plot revolving around Sam and his ex-wife, Anderson and his cast excel in creating a thoroughly compelling, character-driven piece of neo-pulp.

Pope's Faye skirts the edge of cold, hard bitch with a luscious bite. She may be seen by some as an object of desire, but she uses such petty desires to her own advantage at every turn. Coiro as Sam, has a gentle if broken and almost brutish gait. The stories that run across his face, that glow from his coal-dust eyes, bring a humanity and vulnerability to the film that we rarely get in the genre. Berkeley's Frank may feel like a ticking time bomb, but his manic nature never unfurls the film itself into maniacal or maddening territory. There's little doubt that the veteran screen actor, who ScreenAnarchy readers may remember best from his stint on 24, is having a ton of fun chewing into the meaty pathos of Frank Devore. But not one moment is over-the-top. As it goes, a desperate man is a man with focus, and Berkeley brings a laser-sharp attitude and wry sense of humor that makes his initial scenes with Coiro crackle.

And then there's our fourth lead: LA itself. Cinematographer Patrick Meade Jones captures the town in buzzing neon and rich, deep blacks pockmarked by hazy twinkles of streetlight: last bastions of hope and serenity before the long, dark road to hell. The city is portrayed in considerably devious two-faced fashion. It is a place of glamor, power and dreams, and of those shattered dreams, with edges sharp enough to cut deep. When it comes to LA films set at night, and largely in a car, audiences may recall Michael Mann's Collateral or Nicolas Winding Refn's Drive. But comparisons pretty much end there. Anderson's take on LA is as mythic as those two flicks, sure, but by literally setting the course of Sam's cab over real-world, accurate geography, This Last Lonely Place becomes grounded and realized in a way few LA films end up feeling. It may not synch up for those who don't live in or are unfamiliar with the city, but it also helps to bolster the film's psychological landscape, with each locale a marked extension of the characters' histories... their presents and futures.

This Last Lonely Place had its world premiere this past weekend at the Newport Beach Film Festival. To keep track of where its headed next, please visit and 'like' the film's Facebook page.

Do you feel this content is inappropriate or infringes upon your rights? Click here to report it, or see our DMCA policy.
carly popeLos Angelesnewport beach film festivalnoirpulprhys coirosteve andersonthis last lonely placexander berkeley