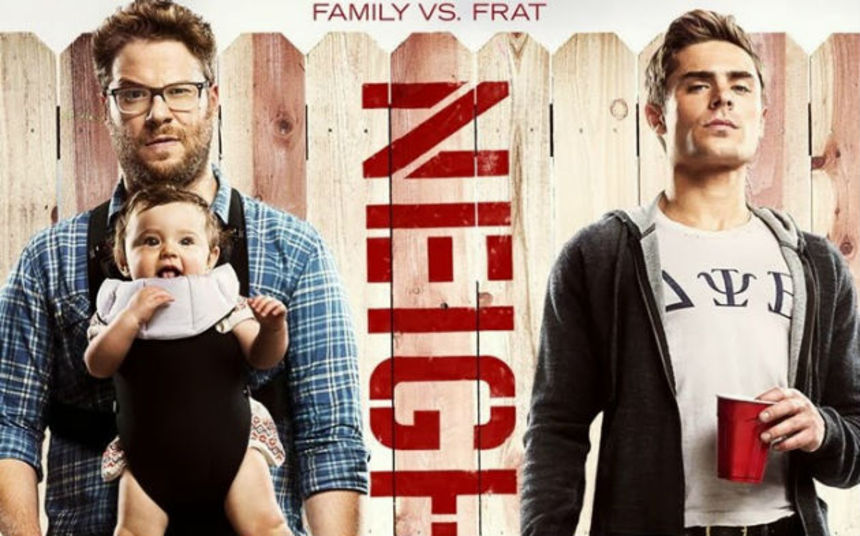 To put it bluntly, asking why things happen in Hollywood studio comedies is besides the point. It's all about getting to the funny as expeditiously and as often as possible.

Neighbors, a new Hollywood studio comedy by Nicholas Stoller, quickly untethers from reality. Thus freed from the burdens of narrative logic and/or character development, the comic talents of Seth Rogen, Rose Byrne, Zac Efron, Ike Barinholtz, and others are allowed to float free and act on their impulses in an 'anything goes' atmosphere -- the raunchier the better.

Director Stoller and writers Andrew J. Cohen and Brendan O'Brien are graduates of the Judd Apatow school of studio humor, and so are well-versed in cooking up a comedy that adheres to a certain recipe: bookending the picture with big set-pieces, and then linking those set-pieces with a series of fast-paced episodes that rely chiefly on sight gags and as many obscenities as possible. The pace rarely flags; it feels like a feature-length, stand-up comedy routine that just happens to involve a large company of players.

Rogen and Byrne play Mac and Kelly, a married couple with a newborn child. They have just purchased a lovely new home -- don't ask how they can afford it on the salary of one lower-level employee working in an office environment -- and are still adjusting to the responsibilities and challenges of parenthood. Then a fraternity, led by Teddy (Efron) and Pete (Dave Franco), buys the house next door -- don't ask why a college fraternity would buy a house in a quiet residential neighborhood -- and immediately starts throwing wild and very noisy parties. Mac and Kelly try to make nice with their new neighbors so they can get some sleep, and end up partying all night long with the boys. When they call the cops on the fraternity for another loud party the next night, though, Teddy vows revenge, and the feud is on. 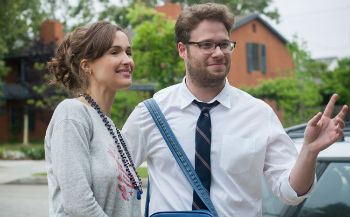 It's all very, very silly; nothing, be it a one-liner or a bit of visual humor, is too broad or vulgar or cruel to be excluded, and, as noted, it's all delivered at a very rapid rate, so while the occasional groaner may provoke a moment of silence, the silence is then swallowed up by the next joke. And, obviously, it's all dependent on the viewer sharing a comic sensibility with the filmmakers. If not, Neighbors would be a painful experience.

To a large extent, Rogen and Efron are known quantities; Rogen does what he normally does, to good effect, and Efron takes off his shirt a lot. So the true pleasure here is watching Rose Byrne take full advantage of her opportunity to shine comedically. She's demonstrated an adroit ability to give her own spin to comedy in past roles, but seeing her often get the better of Rogen in their mano a mano scenes, or, especially, a scene at a party that she absolutely smokes, gives the movie an extra adult jolt beyond the oft-juvenile proceedings.

Neighbors is not the brightest or longest-lasting bulb in the Hollywood studio comedy firmament, but it works hard to ensure that its light-hearted, dirty-minded humor fills the picture from beginning to end.

Note: The film screened at SXSW as a work-in-progress, missing the credits, a final sound mix, and little trims here and there, according to the director in the post-screening Q&A. Neighbors will open wide in theaters across the U.S. on May 9, 2014. Visit the official site for more information.

Do you feel this content is inappropriate or infringes upon your rights? Click here to report it, or see our DMCA policy.
comedyNicholas StollerRose ByrneSeth RogenZac Efron