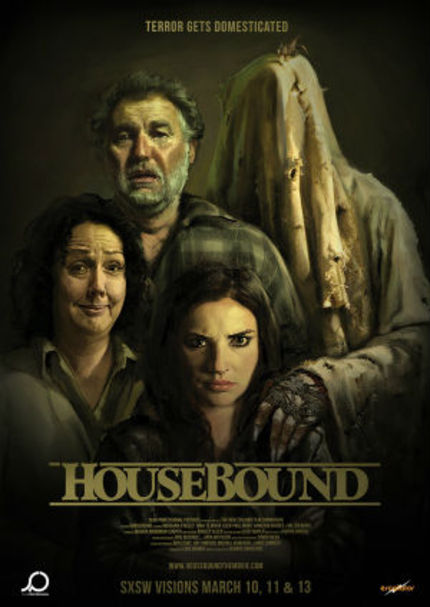 If looks could kill, Kylie would be on death row.

In Gerard Johnstone's deadpan, diabolical, and haunted thriller Housebound, Kylie (Morgana O'Reilly) is an angry, insolent young woman, full of piss and vinegar, so when she's convicted of a crime and sentenced to eight months of detention in the home of her mother, Miriam (Rima Te Wiata), it feels like life imprisonment to her. Kylie resists any impulse to act in a civil manner toward Miriam or her stepfather Graeme (Ross Harper), and is hostile in her court-ordered sessions with psychiatrist Dennis (Cameron Rhodes).

Kylie's attitude hardens when she learns that Miriam has long felt that the family home is haunted, an idea that the young woman dismisses out of hand. Miriam, after all, chatters away all day about nothing at all, just one of the things that made Kylie eager to leave home in the first place. When she, too, begins to see evidence of paranormal activity, she doesn't shrink back, but instead forcibly takes matters into her own hands.

It's rare to see a horror-movie premise that's upended and shaken about as completely as done here. For once, it actually makes sense as to why someone would stay in a house that they think is haunted by a restless, unfriendly spirit: she doesn't have a choice. So simple, so elegant, so forceful. As explained by security technician Amos (Glen-Paul Waru), Kylie cannot leave the premises without triggering an alarm. Since she is newly-sentenced to detention, the authorities refuse to consider her immediate request to be transferred elsewhere until she demonstrates a stable pattern of conduct.

Trapped in her childhood home, yet refusing to give in to circumstances, Kylie becomes determined to defeat the evil that surrounds her. It just so happens that Amos lives nearby and has an active interest in the paranormal, so he reluctantly teams up with Kylie to investigate why the spirit plaguing the house might still want vengeance.

From there, Housebound chops its way through horror-movie tropes with abandon, rejecting most, embracing a few, and conjuring up a couple of new twists. All this is handled with a deadly serious tone that is broken at unexpected moments by deliciously deadpan humor. The levity relieves tension while feeling organic to the narrative; it always makes complete sense and never detracts from the nail-biting atmosphere.

Mahuia Bridgman-Cooper's original score bolsters the proceedings, enhancing and reinforcing the scarier moments rather than creating them with a sudden onset of loud noise. Simon Riera's photography captures the claustrophobia of small spaces and the intimate shadows of big old houses.

Housebound quickly tears apart the classic haunted-house movie piece by piece, and then reconstructs it on the fly with fresh new materials, garnished with oodles of blood, dark comedy, strong characters, and genuine suspense.

The film had its world premiere at SXSW.

Do you feel this content is inappropriate or infringes upon your rights? Click here to report it, or see our DMCA policy.
Gerard JohnstoneGlen-Paul WaruMorgana O'ReillyRima Te Wiata