SXSW 2014 Review: AMONG THE LIVING, A Horrifying Case of Boys Will Be Boys 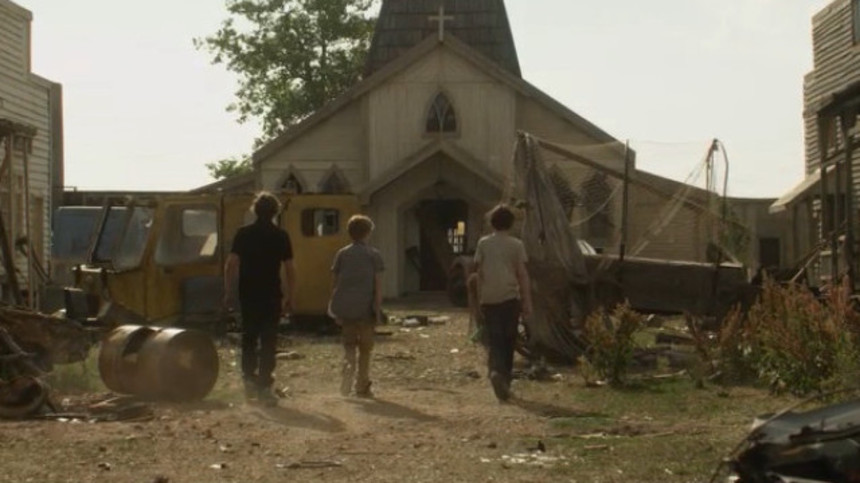 For many horror fans it feels like a lot of the most exciting contributions to the genre these days are coming from France.  This is, at least in part, thanks to Alexandre Bustillo & Julien Maury's 2007 shocker Inside, a home invasion thriller that takes the tired slasher formula to new highs, or perhaps, disturbing lows would be more accurate.

What's perhaps most fascinating about the French new wave horror phenomenon, at least in Bustillo & Maury's case, is that much like The Rolling Stones had to teach America what to do with the blues, the cinema of Bustillo & Maury acts as a reinterpretation of American classics, filtered through a foreign perspective that takes bolder chances and plunges down darker rabbit holes. With their first film, Inside, they put the slasher movie under the microscope, offering a headier premise and far more layered account of a sub-genre usually satisfied with mere exploitative gore. Bustillo & Maury then followed Inside with 2011's Livid, a haunted house piece that pays homage to the gothic architecture-centricity of 50s Hammer horror.

This year Bustillo & Maury premiered their final installment of the self-described American trilogy with Among the Living, a truly horrifying romp that somehow blends Hooper's Texas Chain Saw Massacre and Craven's The Hills Have Eyes imagery, with the likes of E.T., if you can imagine that. The Amblin influence is most apparent in the film's three pre-teen protagonists who bike to an abandoned film set to find a scenario far more cryptic than the 'poke it with a stick' dead body discovery of Stand By Me. For starters, the body they find is very much alive and flailing, tied up in the trunk of a car. It soon becomes apparent that the crime scene is one very much in progress and that the set-squatters consist of a family not unlike the Texas Chain Saw family who inhabit a cryptic cave, and very much like the nuclear rejects of The Hills Have Eyes, led by a larger (and uglier) than life mutant that made a horror icon of Michael Berryman.

But like Bustillo & Maury's previous films, American influences are a mere starting point for an uncompromising style that is entirely singular. You never feel safe watching their work because those familiar with the terror-team know that they're genre filmmakers who are all too happy to cross the line, defecating on it along the way. This is a rare commodity for horror fans, considering the major output of the genre is keen on recycling tropes without offering much in the way of originality. But there is nothing tired about Among The Living. And speaking of tired, I should add that walking into the midnight premiere at SXSW, after being awake for 15 hours on little sleep (on account of the previous night's midnight movie), I found it very doubtful that I'd be able to keep my eyes open. Instead I was treated to a potent reminder of why the best horror films simply must be seen with an audience.

The tension in Among The Living is so thick that it spawned collective coping mechanisms, wherein neighboring strangers locked eyes when they couldn't bear to look at the screen any longer. The fear in the room was palpable as audience gasps and audible cringes fed off one another, heightening the shared discomfort. This is what makes Bustillo & Maury's work such a treat. As fans, they know that this is what the genre is all about. And as relentlessly effective writer/directors they have the know-how to execute one of the few real horror experiences of today.

Do you feel this content is inappropriate or infringes upon your rights? Click here to report it, or see our DMCA policy.
Alexandre BustilloAmong The LivingInsideJulien MauryLividSXSW

More about Among The Living