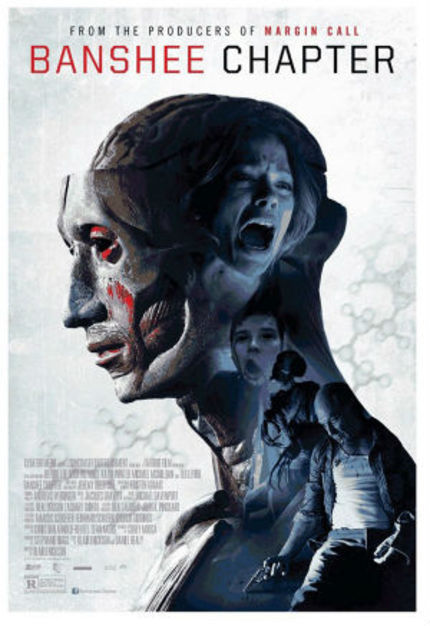 I'm instantly wary of any movie that proclaims its truthfulness right at the top. Why can't I watch it and then decide for myself? Yet Banshee Chapter cleverly steps around the traps it sets for itself with an opening montage of news footage, both subverting and endorsing its premise.

In 1963, the film explains, the U.S. government began using experimental drugs on unwitting citizens with the goal of inducing mind control. The archival footage integrates easily into newly-shot footage with a similar aesthetic, as James Hirsch (Michael McMillian) documents his experiment with, supposedly, the same chemicals. Very shortly, strange, static-filled sounds are heard in another room, and then more strange things happen. And James is never seen again.

Anne Roland (Katia Winter) then steps into the role of the protagonist. She talks about her friendship with James during their university days, their differing paths after graduation -- he became a fledgling novelist, she an online journalist -- and her decision to find out what happened to him. Anne's investigation eventually leads her to Thomas Blackburn (Ted Levine), a legendary counter-culture writer (think Hunter S. Thompson), and a mystery that gets weirder and more unsettling the more she digs into it.

The screenplay by Blair Erickson and Daniel J. Healy appears loosely-constructed, but the story threads are continually pulled tighter. Erickson, who also directed, makes extensive use of a documentary-style, handheld-camera perspective, but the shaky-cam effect is only used when it makes sense. And that's balanced with fixed-position, "archival" recording of scientific experiments that had a devastating impact upon the subjects.

At the same time, Banshee Chapter is a haunted-house movie, of sorts, and so whenever deep shadows are shown on screen, it's natural to assume that something will jump out. Even so, the rhythm of those jump scares is odd and irregular -- it's expected, but not always delivered in the manner anticipated. I found myself guessing when those moments would arrive, but jumping in my seat anyway.

Winter, who appeared in the seventh season of Dexter and has a recurring role currently in Sleepy Hollow, is an appealing lead. She's sensible and strong, but not foolhardy. Levine is an excellent counterpart, giving his line readings the lazy drawl of a burnt-out writer with his brains and wits firmly intact.

Banshee Chapter makes the most of what was probably a very limited budget; it never looks cheap, but neither does it appear overly slick. It feels like a throwback to the more deliberate pacing of 1970s horror movies and that decade's continued distrust of governmental institutions while still feeling absolutely modern in its sensibilities.

The film is now available to watch via various Video On Demand platforms. It opens in select theaters on Friday, January 10. Visit the official Facebook page for more information.

Do you feel this content is inappropriate or infringes upon your rights? Click here to report it, or see our DMCA policy.
Blair EricksonKatia WinterTed LevineDaniel J. HealyMichael McMillianCorey MoosaHorrorThriller