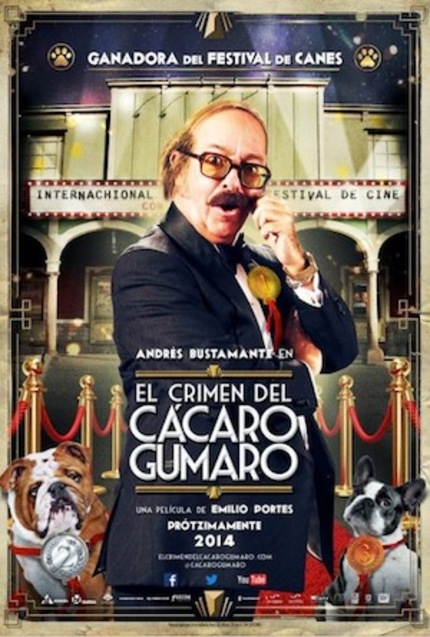 Holy cow. Pastorela's Emilio Portes goes against Cannes winner Carlos Reygadas (Silent Light, specifically) and "artsy" slow cinema in the final trailer for El Crimen del Cácaro Gumaro, the upcoming Mexican comedy that will most likely be a commercial success. But if the trailer is to be believed, Portes is about to face a massive critical failure.

In El Crimen del Cácaro Gumaro (the title is, by the way, an obvious joke on The Crime of Father Amaro), a projectionist dies and one of his sons (Gumaro, played by Carlos Corona) inherits the old movie theater in a small town. With the help of the municipal president (played by famous Mexican television comedian Andrés Bustamante), Gumaro will eventually host an international film festival with movies of all kinds: action, horror, musicals, science fiction, romantic, etc.

The trailer offers mostly silly stuff and a not very promising list of television stars that will have cameos. If you try to avoid Mexican TV (Televisa and TV Azteca to be precise) I don't blame you, but Portes gives a warm welcome to TV personalities like the clown Brozo, Chabelo and the "Mascabrothers". Trust me, the less you know about these persons the better.

On top of that, you have the classic, instantly recognizable Latin American voice of Homer Simpson narrating the trailer. Why? Yeah, why Mr. Portes? Anyway, you can watch this messy trailer below, though it doesn't have English subtitles.

Do you feel this content is inappropriate or infringes upon your rights? Click here to report it, or see our DMCA policy.
Andres BustamanteCarlos ReygadasEl Crimen del Cacaro GumaroEmilio PortesMexican Cinema