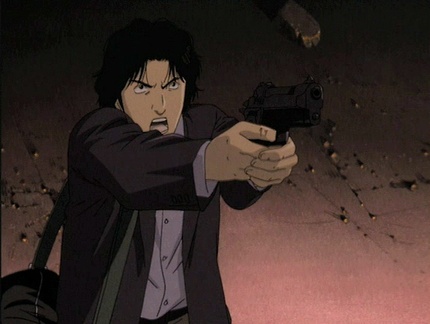 (To all the people who thought Hitler wasn't quite blond enough: wait until you see Johan...)

A surgeon is on the run from the law for crimes he didn't commit, while hunting for the real murderer. Is this The Fugitive? No. This is Urasawa Naoki's Monster. And be afraid. VERY afraid.

A 74-episode anime series that aired in 2004 and 2005, Monster is quite famous and has picked up many awards. It is slowly but surely coming back in the news, as HBO has apparently hired Guillermo Del Toro to create a live-action version for them.

But while English-language versions of the anime have been broadcast in the past, it was actually difficult to get your hands on an English-friendly DVD-set, the release rights even having lapsed from previous US-based owners. This January, that has changed, with Siren Visual releasing the first of a series of boxsets of Monster. This first set covers the first 15 episodes. So what's it about? And is it any good? Read on...

Doctor Tenma is a brilliant Japanese surgeon working in Germany. One night he is faced with a devil's alternative: operate on a young orphan boy who has been shot in the head, or the town's mayor who is rushed in later with a stroke.

Basically ordered to drop everything and operate on the mayor, Tenma struggles with his conscience and chooses to save the orphan instead.

Years later, Tenma crosses paths with a mysterious serial killer. To the doctor's astonishment, the killer turns out to be Johan, the orphan he saved. Now an angelic-looking young man, Johan is a dangerous sociopath who is absolutely ruthless when covering his tracks, and even kills for fun. What's worse, Tenma ends up being implicated in some of Johan's murders and has to flee for the police.

A guilt-ridden Tenma starts living as a fugitive. He trains, buys a fire-arm, and sets himself one goal: to rid the world of the evil creature he himself helped unleash. But as he investigates Johan's past and present, nasty surprises pile up fast, and some of these have roots in the shadiest parts of Europe's history...

Urasawa Naoki is one of Japan's most famous manga writers, and several of his series have been adapted for other media, most notably 20th Century Boys which was made into a trilogy of live-action films. His stories often concern protagonists unfairly confronted with the negative effects of their own actions, leading them from one worst-case-scenario into the next as they try to change fate.

Monster is no exception. Doctor Tenma doesn't do anything wrong from a moral point of view by saving Johan. His train of thought is easy to understand and sympathize with, his reasoning unquestionably just. So it is with pain in our hearts that we see him suffer through the consequences of being a good doctor, when the "right" decision ends up having such a disastrous effect. When Tenma takes drastic measures to try and avert Johan's plans, you get a sinking feeling that he is destined to fail, because he's too much of a goody-two-shoes to be able to do what's... right? Wrong?

Urasawa Naoki obviously revels in keeping the "right" path as shady as possible, and even highlights it by giving Tenma sometimes easier subplots to solve, where his unwavering kindness and moral fiber cause good things to happen. Tenma is obviously our voice of good, of reason, but should he be trying to gun down his former patient, no matter how evil Johan has become? Is a doctor ever allowed to be a judge? Urusawa will not let us off the hook with an easy yes or no...

That doesn't mean the story of Monster is told in subtleties. The questions are often simplified and hammered into the audience ad nauseam, with the bluntness of a bad axe. And while the settings and historical details add a great deal of realism and ground the stories in a believable world, the characters are often behaving in a Shakespearian way, more fitting to opera than a contemporary thriller perhaps. Also, some characters look like caricature Europeans, while still managing to seem Japanese through their body language..

Speaking of looks, the series does a good job showing the style of Urasawa's drawings. While Monster may not be the most technically accomplished or flashy of series, it is handsome and does the job. Germany looks suitably old, both with its beautiful medieval cities in some places, and ugly communist architecture in others.

But the anime's strongest point is the relentless push in its story, which seems set in stone yet often veers away in a surprising direction or subplot, injecting humor or fun where it's not expected. Impressively, these asides never jar with the somber central storyline.

As the end of episode 15 nears, so do the stakes go up considerably. So if, warts and all, the next 59 episodes keep up with the first 15, count me as a lifelong fan. Bring on the next one!

While the story is heavy-handed at times, Monster is extremely engrossing. As a thriller it is horrifically creepy at times, and the strong characterizations, coupled with dangerous adventure, keep tension at a high level.

I can't wait to see what happens next, so this series is highly recommended!

Australian distributor Siren Visual has released the first 15 episodes of Monster as a three-disc boxset, all coded NTSC, and locked to be used only in region 4, so if you plan on purchasing this, make sure your hardware can deal with that.

Audio is fine, with both a Japanese 2.0 and an English 2.0 soundtrack, but video is so-so. Monster aired a decade ago, and the animation artwork was made with soft CRT-screens in mind. On current HD screens, parts of the image shows an ugly interlacing effect I've never encountered before, especially noticeable when there is text on-screen, and it's consistent in all 15 episodes. That may sound damning, but in actuality it's not too bad once your television has figured out that this image shouldn't be shown razor-sharp. It bothered me for a few minutes, then I shrugged and used a different setting. Still...

When I took screenshots I also noticed that the image has combing. Again, not a showstopper but a little surprising, especially after having seen some of the drop-dead-gorgeous transfers on other Siren Visual DVD-releases like Hakaba Kitaro.

This boxset didn't have any extras. Maybe in future sets? It sounds maybe like this release is a bit average, but I'm very glad this series is available now, and applaud Siren Visual for releasing it. And I will eagerly follow the whole series to see how the story continues! 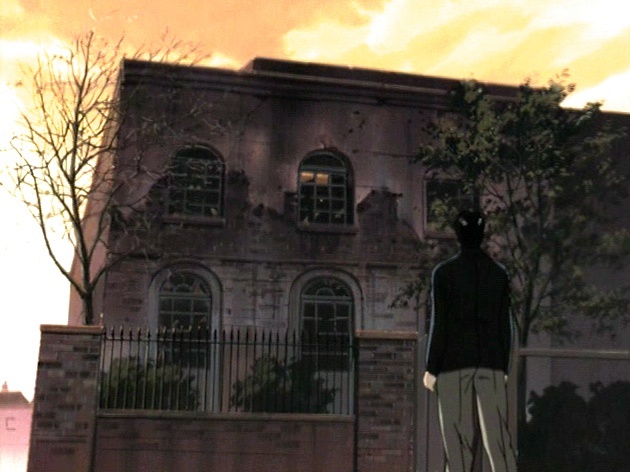