Review: WHITE REINDEER Decks The Halls With Boughs Of Hilarious 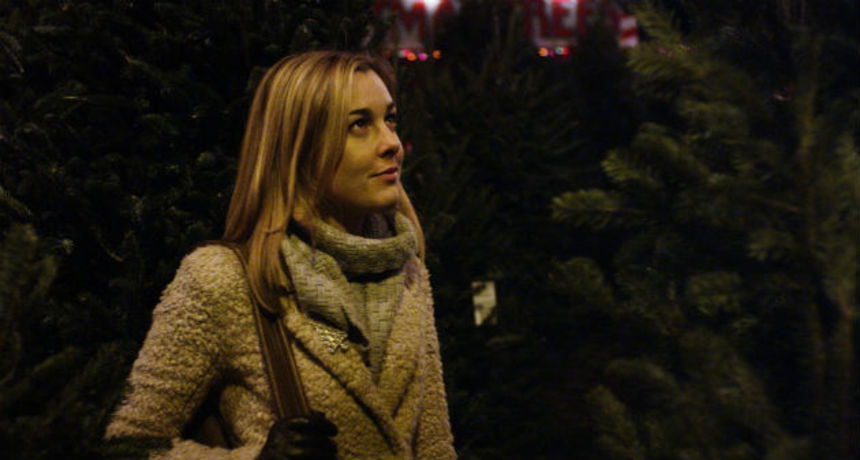 Not every Christmas can be a merry one, but the punishment Zach Clark puts his protagonist Suzanne (Anna Margaret Hollyman) through in his third feature outing, White Reindeer, gives a whole new meaning to bah humbug.

Luckily, Clark infuses a genuine tenderness in his black comedy that allows us to fall in love with Suzanne, without suffering the pains of her particular misfortune. White Reindeer is a wonderfully crafted film that's both full of laughs and full of heart.

The film begins with Suzanne in full Christmas cheer. Working as a real estate agent, it becomes quickly obvious that White Reindeer isn't a typical holiday film when Suzanne shows a home to a nice couple, George and Patti (Joe Swanberg and Lydia Hyslop), who whisper quietly about where they'll hang their sex swing. This sort of dry comedy continues, culminating in particularly funny ways throughout.

The real story begins when Suzanne returns from Christmas shopping to find her TV weather anchor husband Jeff's (Nathan Williams) brains splattered all over the living room floor. Thus begins an abbreviated period of grief that includes Suzanne's discovery that her parents are getting a divorce and that Jeff was cheating on her with a stripper. When Suzanne's online shopping coping mechanism fails to bring her solace, she decides to track down the stripper, Autumn (Laura Lamar-Goldsborough), whose real name is Fantasia. Their atypical friendship serves as the through line for the rest of the story.

The centerpiece of the film is the performance by Anna Margaret Hollyman. A relative unknown (her credits include the recent films The Color Wheel and Gayby -- and I think I caught her in a SXSW bumper), Hollyman navigates Suzanne's stages of grief with the understated grace of a perfectly adjusted woman who is just about losing her footing. This is a star making performance from Hollyman and it will be no surprise if she shows up in much bigger things soon.

It's a testament to Zach Clark's skills as a director that White Reindeer comes together as successfully as it does. This is a complex script (which he wrote), packed with dry wit and difficult humor. While some directors would be stymied by the script's challenging tone, Clark hits his notes just right, telling an extremely entertaining story.

Do you feel this content is inappropriate or infringes upon your rights? Click here to report it, or see our DMCA policy.
Anna Margaret Hollymanblack comedyChristmasZach ClarkLaura Lemar-GoldsboroughLydia HyslopJoe SwanbergComedyDrama