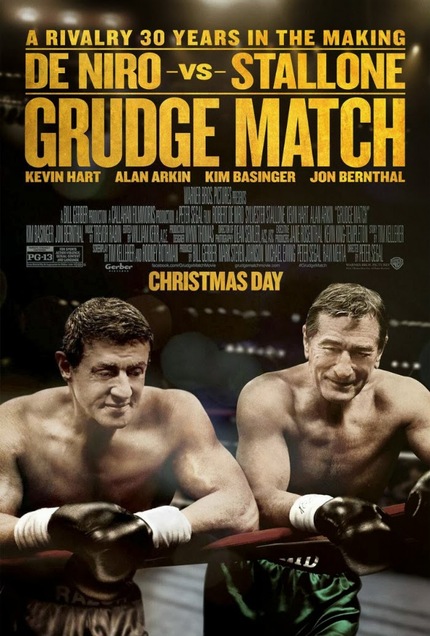 "No matter how hard you guys work, you won't be your best."

No, that response is not John Wayne in Rio Bravo. It's Sly Stallone responding to Kim Basinger in Hollywood's latest round of retiree-baiting, Grudge Match. In the film, aging boxing icons must get in the ring to settle an unresolved score from over thirty years ago. In this corner, it's Sylvester Stallone, weighing in as a little more rugged than his heyday, but impressively chiseled for 67. In the opposite corner, it's Robert De Niro, 70, weighing a good bit more than before but softer all around.
From the opening sequence that mines clips from Rocky films and Raging Bull (colorized!) for a Jim Lampley news desk expository montage, it's clear that this late bout of lightweight career-mining knows exactly what minor class it's in. But, the nostalgia-loving seasoned citizen crowd ought enjoy the heck out it nonetheless. And that's perfectly fine.
Grudge Match may on the surface appear to be a boxing movie, but it's really a retiree comeback film. Past entries in this innocuously enduring niche have shown us Clint Eastwood and Tommy Lee Jones trotting out a scowling dose of the right stuff in order to blast back into orbit in Space Cowboys, and Micheal Douglas and Morgan Freeman giving young revelers a run for their money in Last Vegas. Even Stallone himself has engaged in a version of this with 2006's Rocky Balboa, where the aging champ has to train for One Last Bout. That was the sixth and ostensibly final film of that venerable series, but there's one opponent that Rocky hasn't squared off with, until now: Raging Bull.
No, I don't mean Jake LaMotta, the real life boxer that Robert De Niro embodied so memorably in 1980. This is about his film embodiment. Or more accurately, his film embodier, the actor who was propelled one notch further towards immortality when Martin Scorsese took his camera into the ring for a visceral slice-of-history showdown. The dangerous raw-talent powder keg that De Niro was back then is still a lingering specter on the actor's career, even if it's no longer shocking when he opts for an entertaining if slight project such as this one, or worse. A good decade ago, too many Fockers and Analyze This and That films effectively dulled his considerable edge, to the point where it's legitimately impressive to see him actually get himself into boxing shape, and still nail the comedy (for whatever it's worth).
Stallone also suffered a decline, which, oddly, charts much of the same basic timeline as De Niro's fall from good graces. Whatever respectability and volatility De Niro brought to his earlier work (Taxi Driver, The Deer Hunter, The Godfather Part II), Stallone matched in sheer popularity. His appeal was one of determination over intellect (although he was never stupid on screen), his most memorable characters demonstrating a hardwired commitment to morality, community, and country. It was Rocky that made him a star.
The two films, Rocky and Raging Bull, were night and day variations on the well-established tradition of boxing cinema. Until the conjured meta-appeal Grudge Match forced the issue, it certainly never occurred to me to compare the two. Robert De Niro's Raging Bull was stylized unblinking domestic drama punctuated with blood on the ropes. Stallone's Rocky was the feelgood underdog drama that proved so magnetic, there couldn't help but be a string of sequels. Now at long last, they'll FIGHT!!! Uh, okay... I'm listening...

It goes like this: Thirty years ago, these two boxing icons had a rivalry going both in and out of the ring. One stole the other's woman (Kim Basinger), and an important match ended questionably. Years passed until the water the bridge began percolating again on the anniversary of the botched fight known as "The Grudge Match". Now, in this day and age of UFC and Pay Per View big ticket sporting events, a young and outgoing fight promoter (Kevin Hart) sees an opportunity to establish himself by staging the ultimate double-comeback to settle the old score once and for all. He'll call it "Grudgement Day". And so it all comes to pass.

Grudge Match isn't great, and knows it can't be. But it works better than it has most any right to. Alan Arkin, always funny, plays Stallone's trainer, making a surprisingly functional joke out of the familiar Rocky training montages. Kevin Hart overdoes it as the aspiring fight promoter who brings these one-time rivals out of retirement. But the sheer charisma he displays while putting Stallone and De Niro through such intense publicity humiliation makes him likable. His character's efforts pay off as the apathetic public is eventually made to care about this arthritic smack down.
Even Kim Basinger gets into the comeback spirit, sporting her hairdo from Batman. There's product placement, there's old guy body failing jokes, and even a precocious little kid that annoyingly has too many answers. But Stallone and De Niro give this their comedic all, and even though they're far from the funniest guys in movies, their commitment seems to have inspired everyone else to fall in line as well.
Grudge Match works as well as it does precisely because it knows its place as a breezy footnote to the careers of its leads, and doesn't over-reach, or over-punch.
Tweet Post Submit

Do you feel this content is inappropriate or infringes upon your rights? Click here to report it, or see our DMCA policy.
Alan ArkinboxingGrudge MatchJim TudorKevin HartKim BasingerRobert De NiroSylvester Stallone