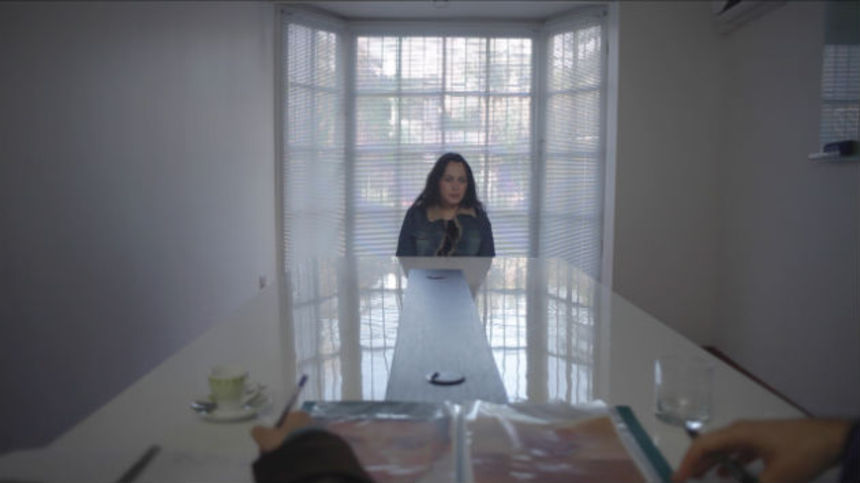 But this year it was different, it wasn't only two Chilean films that were selected to be part of the International Competition (Naomi Campbel and Volantín Cortao), but also both of them were birthed out of film school projects, that is, the films themselves (in one way or another) were the final exam for the directors and everyone else who helped them, and that is the main reason why both films have two directors.

[Full disclosure: This Chilean film was made by students that came out from the same film school that I attended, this was once a short film presented as the final exam for their graduation. Also, the producer is a good friend of me. But, please, hear me out, I usually hate the films made by the people who come out of my film school, and I was prepared to hate this, but look at me here, kinda loving it.]

Naomi Campbel is the first film of directors Nicolás Videla and Camila José Donoso and it's the first film of the non-actor/actress Paula Dinamarca, a transsexual with a gypsy and Chilean indigene heritage, in a way Paula plays herself in this movie, as the script mixes personal experiences of her life with the usual fiction tropes that are used to make the movie interesting.

In the film, Paula chronicles her daily life using a camcorder, the feed tells us a lot about her life: she lives in the poorest part of Santiago, the capital of Chile, she likes to get drunk and hates men, but that's only when she's drunk and heartbroken. The most interesting aspect about these recordings, in which we see her confronting a band of street junkies and young delinquents, is that they are completely real, the directors gave her a camera and they used some of the footage that she recorded in the narrative of the movie.

They also used the recordings to investigate more about the life of Paula, how she lives and what are the things that she does. For example, the main narrative of the movie is about how she is in a casting roll to be in a reality tv show, where she would have the sex change operation for free in exchange of showing the entire process, is in that place where she meets a black girl who is an immigrant working at a strip club in the commerce center in Santiago, she wants to be Naomi Campbell's look-alike, hence the title of the film (but with only one "L").

Among the many elements that this film tries to explore are how the relationships work or don't work for Paula. There's a really strong sex scene between Paula and someone she fancies, where in a crucial moment, he wants the roles to be reversed, and Paula is confronted with the issue of (possibly) having the sex change operation and how she wants to be a woman in body and soul.

There's a lot of reflections and implications about the spiritual world, Paula works at a phone center where they read Tarot cards for the people who call in, and she has a figure of Saint Sara in her backyard, the Virgin Saint of the gypsies, she even has mapuche rituals inside a huge hollow tree-trunk that is lying around in the streets of where she lives (mapuche is the name of one of the indigene tribes of Chile).

The film manages to come across as a message on the conformity of the mixture of everything, how nothing is pure and sacred nowadays, how Paula's own identity as a transsexual being is put in question and at the same time accepted as natural, how the mixture of the cultures in her cults and life make her who she really is, all that added to the figure of Naomi, who strives so hard to stay the fresh and funny person that she is on the inside, and be someone else on the outside.

This is maybe the most important Chilean film of the year, and while it's not the best, it's maybe the one that most clearly shows that the new filmmakers are making more interesting and bold films than the now old new Chilean filmmakers of the new wave. There's a new new new wave coming, and it's going to kick everyone's asses.