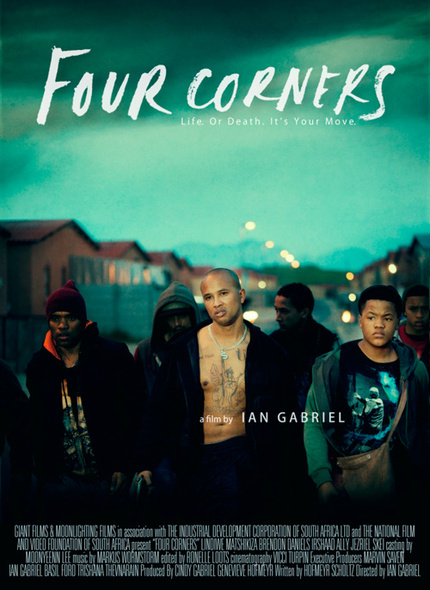 Located just outside Cape Town, South Africa's Cape Flats have been plagued with issues of poverty and gang violence for generations. In a nation that currently has the 15th highest murder rate on the planet, the Cape Flats district of Mitchells Plain posts the highest rates of murder, violence and property crime in the nation by a healthy margin with neighboring districts also posting what reports describe as 'abnormally high' murder rates for more than a decade. All of which makes the Cape Flats a compelling setting for Ian Gabriel's Four Corners - this year's official South African submission to the Oscars for Best Foreign Language Film.

Cape Town today. Home to South Africa's toughest maximum Security prison - Pollsmoor. When Farakahn (Brendon Daniels) a general in the Numbers Gang, is released after 13 years, he wants a quiet life and a 'river of peace'. But he finds himself in a world more violent than when he left it. Now ruthless street gangs - Americans, Nice Times, Mongrels, Dixie Boys - control the ghetto streets, crack and guns are sold openly, and young boys are disappearing, victims of a serial killer. In this turbulent world, Farakahn seeks to make contact with his 13-year-old son - who he's never known.

Meanwhile Leila Domingo (Lindiwe Matshikiza) a London trained doctor, returns home from for her estranged father's funeral. The memories evoked in her father's house - in a suburb that's now part of a running turf war - trigger a wave of conflicting emotions as she struggles to decide what to do with her life. And then Leila comes across Farakahn, recognises him as the boy who lived next door, and finds herself drawn into his world.

13 year old Ricardo (Jezriel Skei) is at a crossroads. A chess prodigy, he is lured in equal measure by the thrill of warfare on the chessboard and the seductive prestige of joining a powerful street gang. With no father to guide him, the one adult he looks up to is Captain Tito Hanekom (Abdurahman Adams) a career cop hell bent on tracking down the serial killer. Then another young boy goes missing. Tito's focus shifts away from Ricardo. Ricardo takes his first step into gang initiation, fascinated and drawn into the unique world of the Cape Flats gangs by the charisma of Americans gang leader Gasant (Irshaad Ally).

Do you feel this content is inappropriate or infringes upon your rights? Click here to report it, or see our DMCA policy.
crimefour cornersgangian gabrieloscarsouth africatrailer