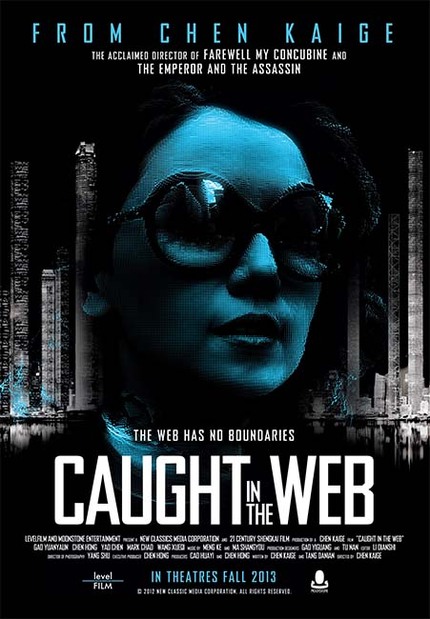 For thirty years, director Chen Kaige has exposed the ills and societal unrest left behind by China's Cultural Revolution in films like Yellow Earth and the Oscar-nominated Farewell My Concubine. With his latest film, Caught in the Web, the story of a young woman's momentary slip gone viral on the internet, Chen tackles the more modern threat of cyber-bullying, invasion of privacy and media manipulation.

The Lady Miz Diva: Can you please tell us what inspired CAUGHT IN THE WEB?

Chen Kaige:  Well, you know that China has probably hundreds of millions of website users, so it's well-developed. What happens on websites sometimes you can consider very positive; people using websites to disclose corruption. People always say that it's a great thing to do that work on a website. But at the same time when something happens that is negative; some people have gotten hurt by the cyber-bullying. Maybe this is a sort of universal thing, not only taking place in China, but anywhere else you could see the same thing.

I think there's so many period piece movies that are made in China, but for the world artists, they may not really know very much about what's going on inside of China. So I really feel like, as a filmmaker, we should do more contemporary pieces regarding the change taking place in China today. That's why when I read the novel, I told my producer that this is the one that I wanted to do. So that's how I started Caught in the Web.

LMD:  I wasn't aware that it was originally a novel.

CK:  Yes, it is a novel, but the ending is slightly different from what you have seen in the film.

LMD:  It is certainly timely as cyber-bullying and the concept of "netizens" are getting more media focus.  Was there any particular issue of cyber-bullying that inspired you?

CK:  Well, you know what? I experienced the period of time called the Cultural Revolution. I witnessed how many innocent people got hurt by the so-called Revolution. So, what happens on websites today is more or less a man-made Cultural Revolution. It's like people just put the blame on innocent people. I think it's just part of human nature, the human race just always wants to find a victim that they can tell. So I think that's what happens on websites. This is one of the reasons that I wanted to do it.

I agree with a lot of people that it's a great thing if you disclose the corruptions in China; those corrupt officials, they deserved to be punished. But at the same time, what about those innocent people? What are we going to say to them about why they deserved to be tortured by the rumours? This is the thing. If we really want to protect something of human rights, we can start from there.

LMD:  There is a surprisingly chilling scene with the co-worker who reveals Ye's identity to the public. She seems thrilled to be part of the mob mentality against her. When asked why she showed the embarrassing video to important business clients, she gives three insincere excuses in one breath. Is that character meant to represent more than just a jealous co-worker?

CK:  What I wanted to say here is that people always believe what they have seen is the truth; but my question is whether truth really exists in this world? I remember the Japanese film called Rashomon; people always say, 'This is the truth,' while the other one is saying, 'No, it's not the truth. What I am saying is the truth.' You never know. You can't make a judgment if you don't know whether the truth exists or not.

This is another theme of the film. People are always arguing, 'What is the truth?' If you'd seen her {Ye} on the bus, this young girl, you'd never know that she is very sick. That's why she's losing control of herself, saying things that she shouldn't say. But then being recorded by a camera, the next day she became the victim of the cyber-bullying. I just feel like we should be very careful when we're saying bad things about other people.

LMD:  Did you visit many social media sites in your research when creating the film?

CK:  I think that for one reason or the other, a lot of people in the Chinese society have become very, very angry without any specific reason, so that's why they want to express themselves on the websites. They don't want to take any responsibility, because no one knows their name, no one knows their real identity. They don't feel guilty if they hurt people.  They just feel, 'Oh, this is my freedom.' But I want to make this very clear to everyone, that cyber-bullying is not a freedom of expression. It is a very different thing.
You just abuse the people's trust to hurt them and then not being responsible for that. I have seen many things like this happen in my life. Those victims become very weak. They don't have any rights to express themselves openly. The only thing they can do is be quiet, but it's not fair. If you say this is a good society that helps people to survive, how can you do this?  So when I'm doing this film, I felt like I'm a little angry about what's happening in real life, because this kind of thing happens almost every single day in China. For example, on city buses the young people being asked by old people to give up the seat for them and the young people refuse to do that, saying 'You don't deserve this. I want to continue to sit,' and so on.  These kind of things happen every single day.

LMD:  However, as you show in CAUGHT IN THE WEB, when it's on the internet, a common occurrence becomes as one character puts it, "a mountain out of a molehill," and the person who's put in the bad light, innocent or guilty, has no recourse for their reputation.

CK:  Right. It's true, it's awful, but this is the thing that I mean. People just feel like it's fun: 'We were just playing a game; we don't mean to hurt you.' But if you cannot protect other people, one day what if the people attack you? You are losing your protection, as well. This is the common sense that I think the people in that society still need to learn.

LMD:  Ye does actually record a formal apology, but the TV station refuses to show it.

CK:  They don't want to because it doesn't help them to do anything.

LMD:  You mentioned earlier that you felt China needed to make more contemporary films that deal with real issues. You're known for your period pieces, but you weren't afraid to tackle controversial subjects. The subjects of the films produced lately are almost entirely escapist. Why do you think that is and do you see a time when Chinese film will carry more powerful messages?

CK:  Well, we are waiting for the time to come that we can continue to do the things that we did in the past. But unfortunately, I feel that with the size of the Chinese film market becoming bigger and bigger, I think the way of production then becomes more conservative. Because in the past, filmmakers always said, 'I want to be different from others. I have my own personality; I want to show what I think in my own films.'
But now people are afraid of that. The filmmakers want to be the same with others because of the market. So you don't really see anything fresh, anything new from the movies that are made today, because people are scared. People don't know whether the audience will want to see this film or not, that's why {they think} 'Is it better to be conservative?' But I'm still in hope for the future.

In the past, the reason I did a lot of period pieces was because something unreasonable was taking place in the history of China, so I mean I want to tell people this is not right. That's why I was doing films like Farewell My Concubine, or The Emperor and the Assassin. That's my personal statement. I think this is very important, to let the audience hear our own voice, although our voice is different and weaker than others. But this is very important for us to continue to do things the same way. I think there's taboos that you cannot really step on; we are struggling in the suffering in the market. I do hope that something is going to be positive again, then we'll do some very interesting, controversial films regarding what's really happening in Chinese society today, I think you are going to see that. I mean, I hope.

LMD:  Is that the type of film we'll be looking forward to from Director Chen in the future?

CK:  I want to do something, but I still need to make a living for myself. {Laughs} I will do some interesting commercial films, but at the same time, I am preparing a serious film deep down in the future.

You know what I think, it's a shame that there are no serious films about the Cultural Revolution have been made. I'm not saying that the reason that I want to make a film like that is to put the blame on anyone else, any people, but I just want to tell that there are still very important lessons for us to learn. If we don't learn the lessons, then I think that this sort of thing is going to happen again.
I think I'm very serious about that because the difference between the rich and the poor in China have become bigger and bigger. So, I mean, some people even think that the Cultural Revolution was the great event of the Chinese modern history, which I'm totally against. I can't believe that people think that way. So people just say, 'We don't want to know the truth,' soon after the Cultural Revolution finished. So that's why we don't think we want to pay a very high price again to tell people how wrong it was.


Caught in the Web opens in select U.S. cinemas on November 27.

This interview is cross-posted on my own site, The Diva Review.  Please enjoy additional content, including exclusive photos there, by clicking this link.
Tweet Post Submit

More about Caught in the Web