Review: CAUGHT IN THE WEB Chooses Love Over China's Netizens 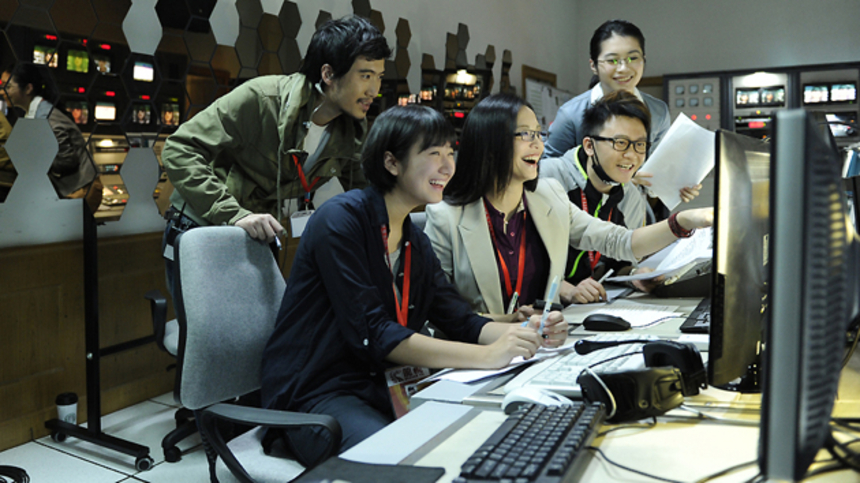 After the critical and commercial success of his excellent period thriller, Sacrifice, in 2010, which marked a perceived comeback for the Farewell My Concubine director, Chen Kaige turns his attention once again to the lives of modern Chinese citizens and examines how shifts in national culture affect the individual.

In Caught in the Web, it is the media, and more specifically China's savage netizen culture, that is placed under the microscope. The film focuses on two ambitious young women struggling to get ahead in Beijing's ultra modern, ultra competitive business world, and how the anonymous unforgiving masses of the online community threaten to destroy both their lives.

Attractive, successful and good-natured, executive secretary Ye Lanqiu (Gao Yuanyuan) discovers at a routine medical checkup that she has late stage lymphatic cancer. Her world shattered, she inadvertently gets involved in an altercation with an elderly man on the bus, which is caught on camera by budding reporter Yang Jiaqi (Wang Luodan).

With the press, her boss' wife (Chen Hong) and the entire netizen community wrongly demonizing her, Lanqiu seems at a loss. Jiaqi agrees to film her apology, but Ruoxi has no interest in airing it. Instead, in a bizarre twist of fate, Lanqiu hires Shoucheng (Mark Chao), Jiaqi's disgruntled cameraman - and Ruoxi's boyfriend - to be her bodyguard for the week, while she puts her effects in order. Lanqiu has no idea who he really is, but he knows precisely who she is and what his girlfriend is doing to her.

What follows is a series of increasingly contrived circumstances that see honest business ethics and traditional family values rewarded, while ruthless, insensitive behavior in all its guises severely punished. The script too often relies on unlikely coincidence in order to cover a number of different hot-button ethical and social issues between a relatively small number of characters, which can't help but feel lazy and dilute the well-intentioned message.

However, outside of this contradictory morality tale, in which the luxurious benefits of China's burgeoning consumer economy and increasingly affluent middle-class appear to be both aspirational and toxic, there is a far more traditional, infinitely more interesting, romance playing out onscreen. Chen repeatedly warns us the corruptive power of wealth and greed, yet at the same time crams his frame with an abundance of newly attainable designer brands and lavish, sparkling locations. He upholds his reputation for attractive visuals, but in this product-heavy urban context, Caught in the Web often feels heavy-handed and closer to a commercial than a dramatic narrative.

Despite all this, whenever Chen's attentions shift away from appeasing his sponsors and wagging his finger at the exploitative self-aggrandizing media and the smartass netizens, the film shifts up several gears. The evolving relationship between Lanqiu and Shoucheng, from employer-employee to potentially doomed lovers, may ultimately fall into step with countless Asian romances before it, but always feels authentic and entirely justified when doing so.

In the hands of a less skillful actress, Lanqiu may have become frustratingly passive or irritatingly pure, but Gao Yuanyuan steps up admirably, creating a character who is delicate, confused, flawed yet utterly adorable. As Shoucheng slowly warms to her, dropping his initial laidback, nonchalant persona, so to does the audience. We know from the film's opening moments that Lanqiu will be dead soon, and that Shoucheng is actively planning to marry and start a family with Ruoxi, but that never stops the audience from willing this young couple together - such is the romantic strength of their onscreen pairing.

But this is the whole point of Caught in the Web. The film doesn't want its audience to be sucked into the online lynching of Lanqiu following her isolated act of disrespectful mocking, or the material greed endemic in urban living. We should appreciate the simpler things in life, like chivalry, romance and nature, as well as take the time to get to know people before judging them flippantly, based solely on snatched moments taken out of context.

Unfortunately, I am not convinced that Chen really believes all that, or might even be fearful of the online reaction to these criticisms himself. Caught in the Web is frustratingly toothless in its examination of netizen culture, and ties up its narrative far too simply, with each character falling cleanly on either side of a rigid social barometer. The film is diverting entertainment, with the sparring between Wang Xueqi and Chen Hong as the rich married couple often very entertaining, but one can't help but feel Chen Kaige misses the point somewhat, save for recognizing the indisputable beauty and talent of Gao Yuanyuan.

Do you feel this content is inappropriate or infringes upon your rights? Click here to report it, or see our DMCA policy.
Chen KaigeGao YuanyuanWang LuodanYao Chen

More about Caught in the Web