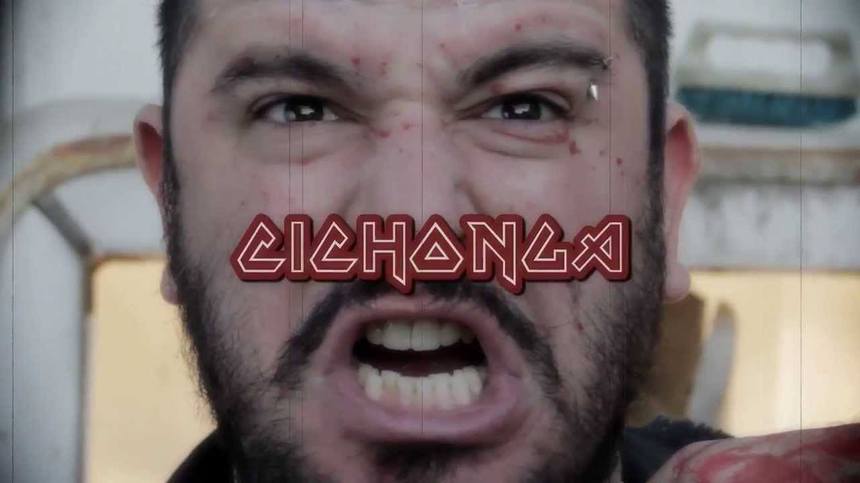 In the first days of the Valdivia film festival here in Chile, the talk of the town was the world premiere of Cichonga, which is weird for a festival where the main focus is art house cinema from around the world. Although the festival has a special inclination towards the cinema of Latin America, no other genre filmmaking from this part of the world is featured in the program. This fact was even mentioned in the introduction of the film by one of the festival programmers

The cinema was packed, everyone saw posters in the streets and postcards, everyone was talking about how much Cichonga was a novelty for the festival and how well sold it was to the audience present there. All the excitement lasted five minutes after the movie started, when a quarter of the people sitting left the theater. By the end of the film, only half remained sitting watching the screen.

The director, Esteban Rojas, and the protagonist (El Cicho) were there and I guess there was some disappointment. Maybe they expected people who actually knew what they were seeing, who knew what to expect, but no, the people there were expecting the same kind of quality that they were seeing in other festival films such as It Felt Like Love, Soldatte Jeanette and Ruin.

These aren't people who understand films made by Troma or Farsa Producciones (the production house of B-movie horror, famous for its Plaga Zombie trilogy), hence the fast fleeing of the oldest people in the cinema, once they saw the first bloody seconds of this Argentinian effort, related in many ways to the films of Farsa, due to the invitation of the director to the household names of that company to appear and act as 'guest directors'.

The film is ridiculous from the start, as it opens with a fake trailer for a movie called 'Hobbit with a Shotgun' (Let's go to Mordor, motherfuckers), only to then blast us with its heavy metal score (that never stops) and an initial sequence that explains our protagonist, Cichonga, a big heavy man who has a big problem to survive, so a mad doctor makes an apparatus on his chest, that, in order for it to function as a pacemaker, needs a powerful beer.

We cut to the house of Cichonga, where we see the source of his power and life, a beer that he makes using cheetah's semen and many other disgusting ingredients, but what he doesn't expect is for someone to steal his beer and then deprive him of the way to make new beer. The film, from this delirious and interesting opening, just fails to keep itself interesting, being repetitive in its fight sequences, blood, violence and even the use of certain shots.

The cinematography seems way overexposed in practically every shot, and there's the fake grain and scratches that seems to be a staple in the genre since Grindhouse, but this time it doesn't seem to be imitating a genre in specific, except for the ultra violence that Farsa and Troma made famous. Both companies started in the 80's and 90's, respectively, way later than the films homaged in the Tarantino/Rodríguez epic film.

The camera always seems to be five millimeters away from the face or the object that it tries to frame. That exaggerated feel in everything that the movie does in every second that passes becomes tiring after a while. There's no rest, the film is always up to 11 in the visual sense, a troubling prospect when the film can't image new ideas for Cichonga to fight against in a 60 minute film, and hence decides to repeat scenes almost identically.

There is, though, a charm to a film like this. It's obviously made for the crowd who enjoys this kind of film (I'm among them), but it needed to be way more imaginative and maybe just uncheck the grain effect when you're editing on Final Cut next time. The movie had a lot of potential as something more than an exercise in bad taste and imitation; it could have been a statement on how much better things are with beer.