TADFF 2013 Review: STALLED Does Not Poop On The Zombie Comedy Genre! 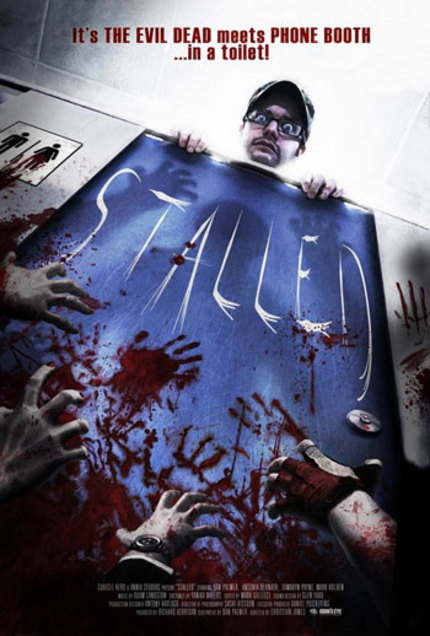 (Stalled plays as part of Toronto After Dark's Zombie Appreciation Night. It screens this Saturday, October 19th at 7:00pm at the Scotiabank Theatre)
You may think to yourself "can an entire film play out within the confines of a workplace bathroom and not be some vain attempt by an indie filmmaker to show how cool they are?" More so, can an entire zombie film like Stalled do this? Within the brief history of the genre hapless and helpless victims have been trapped in homes, cellars and larger space alike. But a bathroom? I myself, doubtful as I was, am surprised to tell you that yes it does.

It's Christmas Eve, and a soon-to-be-shit-canned maintenance gopher (Dan Palmer) is changing light bulbs and cleaning toilets instead of drinking egg nog and making out with drunk receptionists at the annual office party. Unfortunately for this forlorn floor-sweeper, he chooses to use the ladies restroom the very second a zombie outbreak occurs! Will he bowl us over and flush away the undead or (like in his pre-apocalypse life) simply remain ...Stalled?

As any good horror film starts out, Stalled begins with two chicks making out in a bathroom during the company Christmas party. That... is about as sexy as it is going to get as soon after the zombie outbreak begins and you will be immediately turned off and resume a sensible state of tension in your pants. 'WC' (Water Closet?) finds himself trapped in his stall, his tool kit left on the counter, and zombies start lining up out the door, like any woman's restroom. Is he trapped? Doomed? Alone?
Anything billed as a "horror-comedy" must face the piper and answer the question, does it do both well? And that answer is yes. You get that understated British comedy that is just as lingual as it is physical. Some of the jokes feel a tad too long but there are plenty of laugh out loud moments throughout. Then there is an appropriate amount of gore and goop flung around this humble abode of the damned. Though the zombies be ravenous and hungry, they are a shambled lot. You can imagine if they were zombies of the Boyle/Snyder variety this movie would be over in minutes. Smash down the door, nibble nibble nibble, game over. Thankfully these zombies can be deterred by industry grade door hinges longer than most.
I think where the Brits excel in their horror films is the surprisingly generous amounts of heart in these films. It somehow feels more genuine in their writing. It does not feel forced. And as the story of 'WC' plays out we continually find ourselves in these moments of relatability and attachment. And though 'WC' is not always a likeable character, he has to account for some of his own shortcomings in the second act, you have to like him because he is one of only a couple uninfected people in the building at this time. In an ensemble cast there will be disposable and despicable people you can give a toss about. But you have to like 'WC' and thankfully writer and star Dan Palmer has not written himself into a whole here.
All in all Stalled is a perfectly likable and solid zombie comedy. There are predecessors whose reputations may seem insurmountable but Stalled has a nice balance of gore and guffaws to satisfy any fan of the genre and at least make it stand out from the crowd.
Sign-In to Vote
Tweet 0 Submit

Do you feel this content is inappropriate or infringes upon your rights? Click here to report it, or see our DMCA policy.
BathroomHorror ComedyStalledToronto After DarkZombie ComedyZombies

I couldn't disagree more. The lead (And also the writer) is almost as flat as the photography, and the post credit sequence seemed to go on for about 20 minutes. Awful, awful film.

This film is a real surprise! Really runs with the concept and has some surprisingly emotional beats amongst the Raimi-esque gore. Loved the performances, love the energy, loved the score, great little no budgeter.