Venice 2013 Review: Tsai Ming-Liang's STRAY DOGS May Be One Of The Most Powerful Retirements In The History Of Cinema 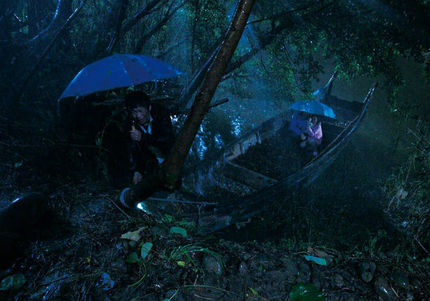 If Stray Dogs really is the last movie of Tsai Ming-Liang, then it would be one of the harshest losses of modern cinema, but at the same time one of the most powerful retirements in the history of the medium. In his latest effort, the Taiwan-based director explores the power of the cinematic image to its core.

He is more concerned with feelings than with content. The movie deals with a lost family at the edge of society and their desperate need for a mother. One could say that the film is about isolation and the eternal fight of a poor existence.

But even more, it is about the feelings that arrive with those topics. In Venice, half of the audience could not endure the long and static shots because they were waiting for something to happen on the surface. But Tsai Ming-Liang is not a director of the surface. He goes way deeper. There is the famous statement by Pablo Picasso, that if you have a look at something for a few minutes it gets boring but if you keep on looking, it gets interesting again.

The same is true for the beautiful composed shots of Stray Dogs. At first glance, there seems to be easy narrative information in every shot, but the director invites you to stay a little longer, to stray around his images, and to read between the lines. One starts to reflect on setting, characters, past, and oneself. Therefore, Stray Dogs is like almost all films of Tsai Ming-Liang about our perception of time and how cinema can fix time. He holds on to feelings instead of giving them as mere plot information.

Flawless composition and a marvelous interplay of sound and image show the rare talent of the filmmaker. Every new shot (though there are only few) is important and transfers an emotion. For example, one can see two guys with colored raincoats stand in the middle of a junction keeping up commercial signs in the pouring rain. A few minutes later, the camera moves closer and one can recognize one of the protagonists. Another few minutes later, the camera moves into a close-up and one can see his suffering. Every new image has a new meaning.

The mother figure emerges in three different women played by three different actresses. As a result, like Luis Buñuel in That Obscure Object of Desire, Tsai focuses on the role of the woman in a more general context and not reduced to one individual body.

Moreover, Stray Dogs is concerned with the very processes of sleeping, eating and grooming, all of which are physical actions that secure an existential urge for survival. In a mesmerizing scene, Lee Kang-Sheng eats a head of lettuce that was brought by his daughter and is supposed to resemble a woman/wife/mother.

Finally, Stray Dogs not only deals with an existential survival instinct that is metaphorical covered with a recurring image of the eponymous dogs at the border of the city, but also with the existential need to watch pictures.

There is an ongoing battle between view and forlornness. The director films through glasses and nets; he presents his shots from way above or behind. The characters find themselves in front of a beautiful wall that shows a riverbed. It is as if in the midst of all their misery, it is a picture that gives them hope.

Tsai Ming-Liang has made a movie that reflects on life and cinema at the same time. Just like the rain in the movie, the film attacks you, isolates you, and cleans you up to a point where one can feel the purity of a stray dog that just needs someone to give him food, or in the case of the audience, a picture.

Do you feel this content is inappropriate or infringes upon your rights? Click here to report it, or see our DMCA policy.
Tsai Ming-Liangvenice 2013venice film festival 2013